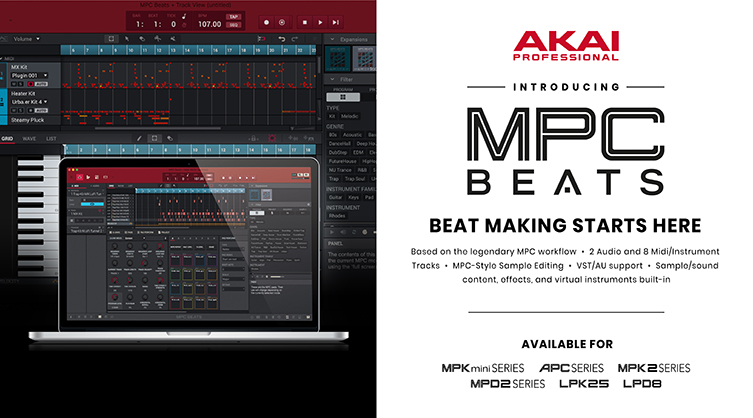 Growing up on hip hop, dance music or any other kind of beat making, you'll no doubt have been dying for a shot of an Akai MPC at one point or another. Their legendary samplers and all in one workstations are so sought after they've become part of the culture surrounding these genres. However, as is the case with most quality studio gear, they don't come cheap. That means as a beginner it can sometimes be difficult to get your hands on one and experiment with it for yourself. Don't get us wrong, there are more affordable models such as the fantastic MPC One but when you're just starting your journey into beat making and music production, sometimes you just want something to play with that isn't going to break the bank. Well, we're pleased to say that our prayers have been answered by the launch of some exciting brand new software from Akai, MPC Beats.

Essentially taking the core of their MPC models and making it available as a DAW in itself, this new software really allows you to get a flavour of the MPC. It's really intuitive and similar in feel to the actual units with a 4x4 drum sample grid, a piano roll, sample library browser and sample edit window. We've not had the chance to play around for too long but we got up and running really quickly and had a blast messing about with it. There are even beat templates and if you're just getting started, it's really helpful to check out where the notes have been laid out to help you on your own production. 2GBs of really high-quality samples give you plenty to get your first beats up and running and they sound as fat and crispy as you'd expect from the guys at Akai. In fact, they were even good enough to throw in a few VST synths, Bassline, Tubesynth and Electric alongside no less than 80 of their acclaimed FX plugins so there really is everything you need to start making music right away. With 2 stereo audio tracks and the ability to add in your own VST instruments, map it to MIDI controllers and much more, we'd really recommend checking this out if you're looking to dip a toe into production. In fact, you can actually open it as a plugin in most DAWs, so even if you already have a setup you know and are used to, or are already accomplished beatmaker, this is well worth a look - who doesn't want some new samples and instruments to play with!?

MPC Beats is free to everyone on Akai's website and now comes bundled with loads of their studio gear including the following controllers: