How to Improve Your Rhythm Playing

What makes a great rhythm player? Well, of course, that’s entirely subjective, but for us, the rhythm guitarist is the driving force behind a band's sound. Sitting on top of the bass and drums, their playing adds the colour and thickness that brings a song to life. They provide the lead guitarist and vocalist space to bring in the counter melodies, solos and licks that people remember. On top of all of this, they know their way around riffs and are the machines that keep the music running. In other words, rhythm is important, often more so than lead playing.

We thought a look at developing your rhythm work was long overdue so in today’s blog, we’re sharing a few points that we think will help you all out.

As a great rhythm guitarist, you must be a master of chords. It doesn’t matter what style of music you’re playing, chords are important and you need to know them inside out. Of course, it makes sense to start with the basics but to be totally honest, that’s only going to get you so far! You should be able to play up and down the full neck, experimenting with alternative voicings and even tunings so you can fit in with anything your band plays. 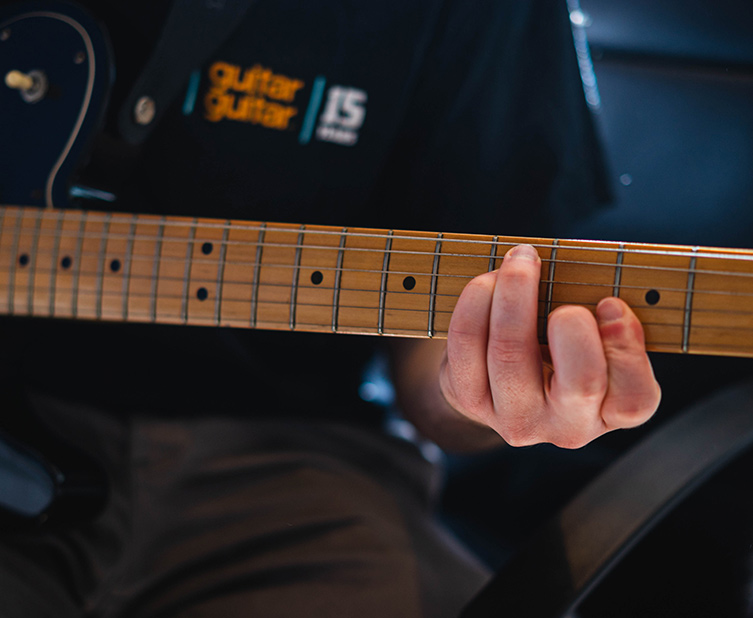 Not only that, it’s absolutely essential that you can change between these different shapes smoothly. A solid rhythm player should always be in control, providing a backdrop for the lead parts so it’s really important to make sure you’re not fumbling around the fretboard when they’re kicking it up a gear!

There are two types of people in this world, the Angus Youngs, barreling around the stage, busting out solos and the Malcolm Youngs, stood at the side, head nodding, dishing out big rock tones. As a rhythm player, you may not always be the centre of attention but that’s fine! As much as many of you hate to admit it, 90% of the crowds at gigs just want to hear great music and don’t care too much about how many notes you can hit. It’s your responsibility as a rhythm player to keep the ship afloat, no matter what style of music you’re playing.

Players like James Hetfield have crafted their own rhythm sound which is perhaps more recognisable and iconic than the band’s lead guitar parts. Remember, rhythm doesn’t need to be simple strumming and it can be complicated and flashy… But it just needs to work. 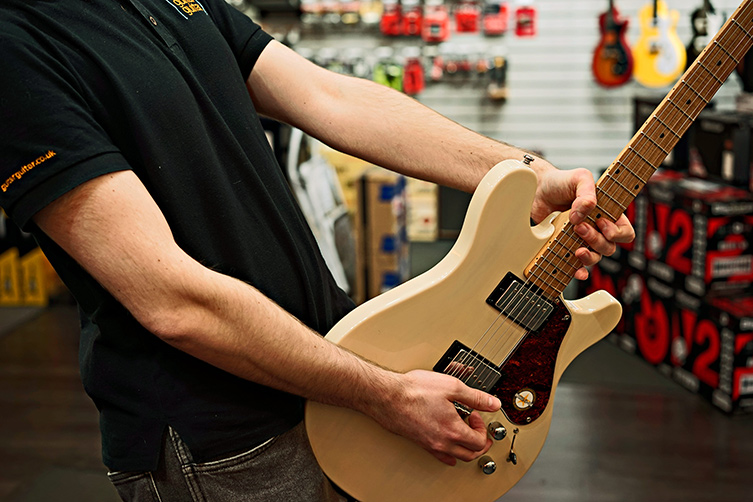 You are the last line of defence if the lead player or the vocalist falters and your sound will keep things moving, so make sure that whatever you play fills that void in the best way possible. It doesn’t matter if that’s with a simple chord pattern, a choppy sequence or a more complex part, just consider every element of the band when you write or perform and you’ll be winning.

We mentioned Malcolm Young earlier, a guitarist who’s widely recognised as one of the greatest rhythm players of all time. Now, he was fantastic at keeping things afloat but another element of his playing which made him stand out was his tone.

Your rhythm tone is likely to be totally different to your lead sound so don’t get too crazy with the high gain. For rock music, rolling it back and letting your amp naturally break up usually works wonders but how you sound really depends on what you’re playing. Nile Rodgers for example, has one of the most recognizable rhythm styles of all time, using bright, sparkly cleans to cut through and add his flavour to the mix. Dial your tone in around your fellow bandmates and when you hit the sweet spot, you’ll know. It’s about the sound of the band, not about showing off your guitar so vibe it out and let your tone come naturally. 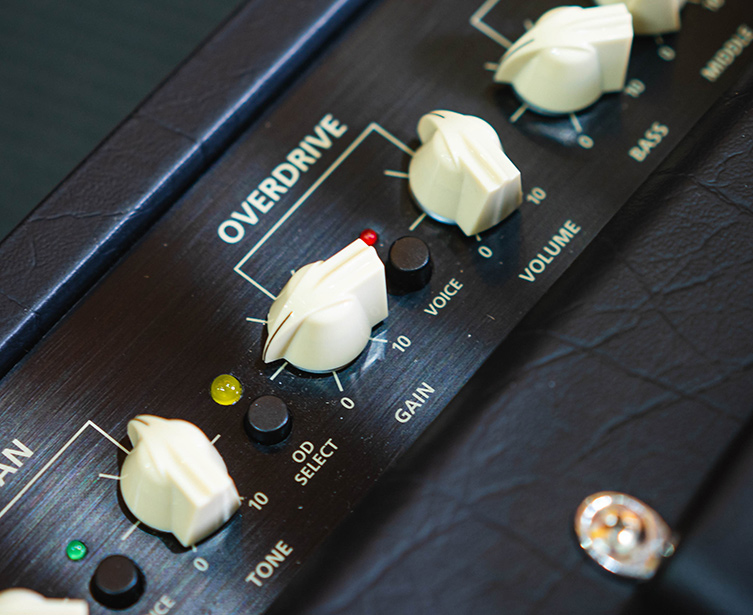 As a guitarist, your timing has to be on point, there’s no getting around that. We’re sure some of you are total nerds about complex time signatures but even for bands playing good old 4/4 rock need to sound tight, especially the rhythm players.

Like we keep saying, you are the engine behind your band’s sound so whatever you’re playing needs to be on the money to build a solid rhythm section. There are tons of ways to practice this but the most straightforward is simply playing along to a loop or metronome. 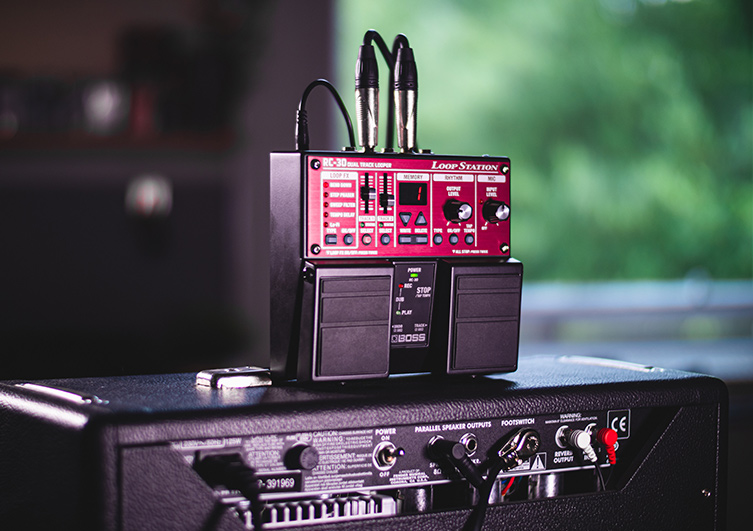 Recording yourself is also particularly useful because when you play that track back, there’s no disguising your blunders. It will force you to consider your timing more and give you the motivation to work on it. If you have a loop pedal at home, they’re also fantastic for developing your skills. By regularly building loops up, starting with percussive elements and bass notes, you’ll get a feel for how your parts fit in around them and again, there’s no escape if you sound off. Don’t be disheartened if that happens though, it just means you need a little more practice!

Sometimes all you need as a rhythm guitarist is a heavy right hand and some simple chords. Sometimes, you need to be a master of palm muted downstrokes. Only you’ll know what style works for your music but it’s a must that you practice controlling your picking and strumming.

Although it may not be as obvious, rhythm playing is as much about precision as lead playing. While Keith Richards isn’t the most technical player by any means, his guitar parts always sound totally perfect for his band, even when they play live. They’re never too in your face or overpowering, instead, they flavour the music, creating a backdrop for the group to perform on. He’s mastered how to nail these over countless live shows and can adapt easily thanks to his tried and tested patterns. 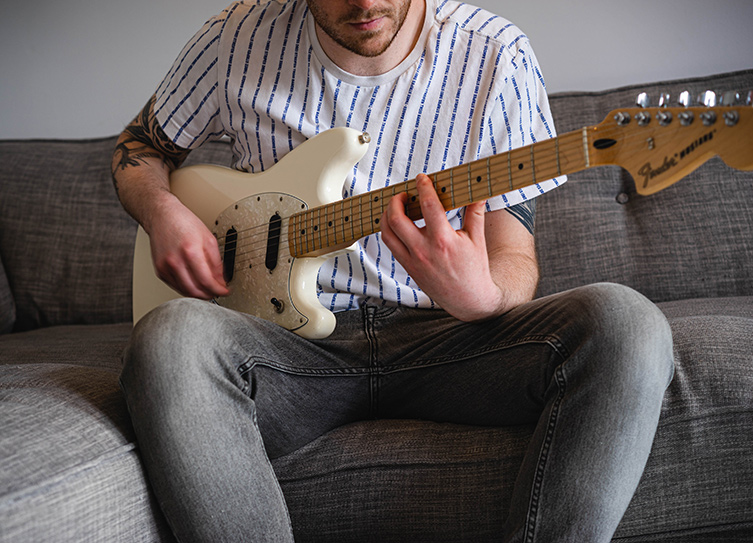 Spend a little time experimenting with different strumming and picking techniques, muting strings and really embracing your role in the rhythm section. Remember to also consider what your picking hand is doing because it's equally as important as your fretting hand! Moving it to more comfortable positions when you're playing different styles is absolutely fine, as is adjusting how you hold your pick. In fact, you'd be amazed at how much difference tiny tweaks like these can make.

Your contribution to the band’s sound is massive so take responsibility for the grooves that different strumming patterns can bring and really hone your style. It can be difficult initially to turn new techniques to muscle memory but once they’re locked in, you’ve got them for life. Whether it’s galloping riffs, alternate rhythms or finding some rhythmic picking patterns that work, it’s practicing these often taken for granted elements that will set you apart.

Ready to rock? Good! We hope this overview helps you tighten up your sound and become the powerhouse that every band needs. There’s as much glory in nailing your chords as there is in busting out a killer solo, in fact, your job is even more important! If anything, great rhythm players are rarer than great lead players so wear your axe with pride and build on the fundamentals. Trust us, at your next jam session, your partners in rock will thank you for it!