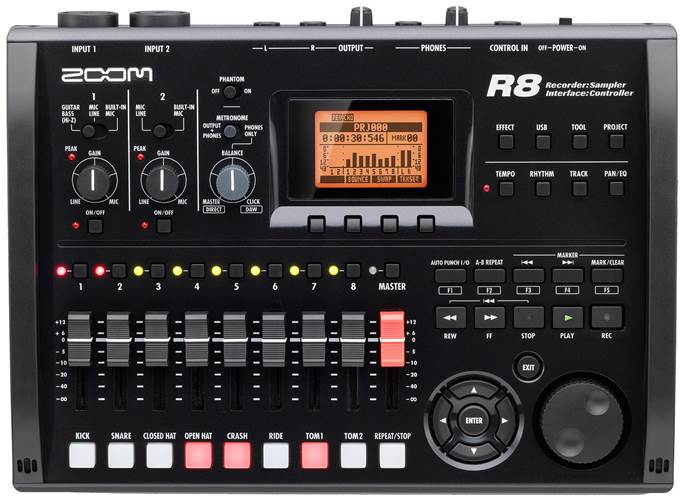 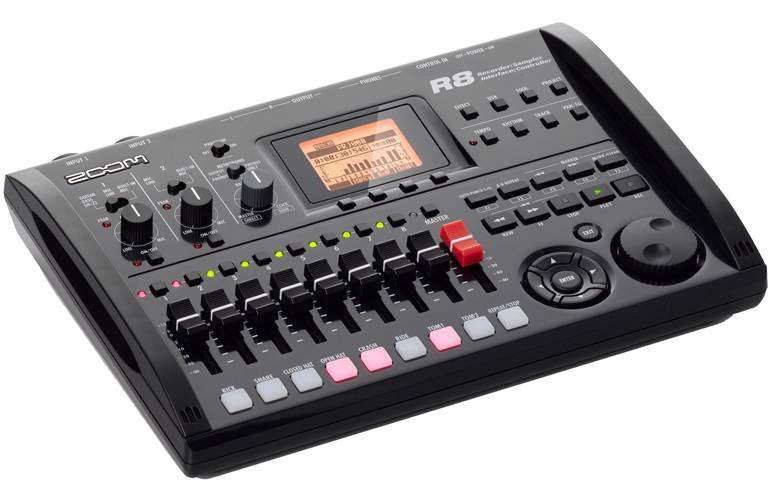 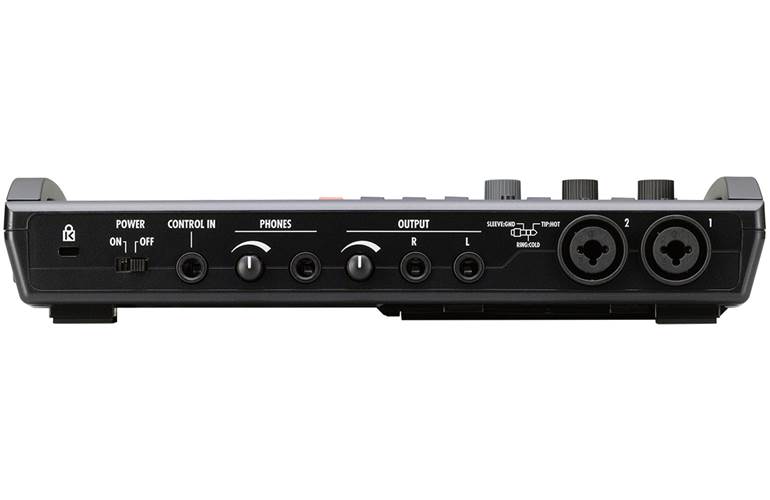 Zoom takes the turbocharged design of the R24 and scales it down for an ultra-portable music production solution. Like its predecessor, the R8 combines four production tools in one versatile device. In addition to being an 8-track recorder that utilizes SD memory, the R8 is an audio interface, a DAW control surface and a sampler complete with drum pads and a rhythm machine.

Zoom takes the turbocharged design of the R24 and scales it down for an ultra-portable music production solution. Like its predecessor, the R8 combines four production tools in one versatile device. In addition to being an 8-track recorder that utilizes SD memory, the R8 is an audio interface, a DAW control surface and a sampler complete with drum pads and a rhythm machine.

RECORDER Simultaneous recording of 2 tracks and playback of 8 tracks The R8 is the perfect tool for capturing audio on-the-go. Record live music performances, rehearsals, songwriting sessions or even audio for film and video. Playback up to eight tracks of audio at up to 24-bit/48kHz resolution as WAV files. If you make a mistake, use the UNDO/REDO function to cancel the last recording operation and restore the previous state. You can even mix down completed songs inside the R8 and save a mix for each project.

INTERFACE Audio interface supports 2 inputs and 2 outputs When combined with your computer, the R8 becomes a powerful audio interface. Connect the R8 to your computer via USB, launch your favorite DAW or use the included Cubase LE software and start laying down your tracks. Simultaneous 2-in/2-out capability allows you to record up to 24-bit/96kHz high definition audio. If you use the 44.1kHz sampling rate, the internal DSP effects of the R8 are also available for your computer tracks. A dedicated control lets you adjust the mixing balance between the DAW playback sound and the direct sound for monitoring.

CONTROLLER Control surface functions for most DAW software The R8 can be used as a control surface for DAW transport functions (play, record, stop) and mixing operations. Through a USB connection, you can control the transport and mixing functions of major DAWs such as Cubase, Logic, and Sonar from the R8. In addition, you can easily move multiple faders at the same time. No more mixing with a mouse! The R8 makes mixing a pleasure.

SAMPLER 8-voice sampler with 8 pads The built-in sampler functions allow you to loop audio data on any track. You can play the pads in real-time and combine loops to create a performance for an entire song. When setting loop intervals, you can see the waveforms for visual confirmation. Time-stretching, which allows you to change the tempo without changing the pitch, and trimming the unneeded parts of loops, is also possible. You can use the sampler and recorder functions together seamlessly to play back loop tracks while recording instrumental performances on other tracks.
Zoom R8
EFFECTS
SAMPLER
INPUTS AND OUTPUTS

WHAT'S IN THE BOX

Great value for money, easy to use, well made.

Bought to replace an H4. Much better user interface. Really quick to set up and start projects. Love it.

Great piece of kit. Was up and running and laying down tracks within 30 minutes and that's for someone who has only ever used a potrastudio about 10 years ago!!

good beginners kit, vey simple to use, didn't even need the instructions! not quite a Tascam but near enough, and half the price. Not had it for long but on first impressions I wouldn't bother with the free Cubase and instead download audacity(free)

i havent used the item as its for xmas present but delivery was fast.

Still playing around with the items,but am happy.

Zoom R8 is a fabulous piece of kit. The range of features is astounding for something so small and so cheap. I bought it as a multi-track recorder, which it does excellently. I'm pleased to report that the bonus features are surprisingly good too: the built-in microphones are very good, the drum machine is not bad, most of the guitar effects are impressive and even the reverb effects are pretty decent. It's well-built and easy to use (inevitably, some functions are fiddly, but that's the price of a compact unit - you can only fit a limited number of controls in the available space). Even the instruction manual is refreshingly clear. <br/> <br/>Overall, I can't recommend the R8 highly enough.

Rapid delivery, and was pleased with the ability to track product. 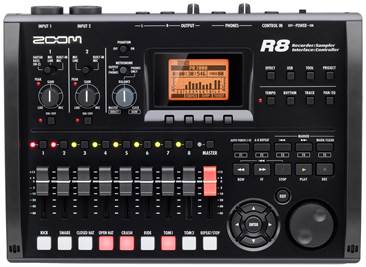 We'll get in touch when the Zoom R8 - 8 Track Recorder and Audio Interface is available.