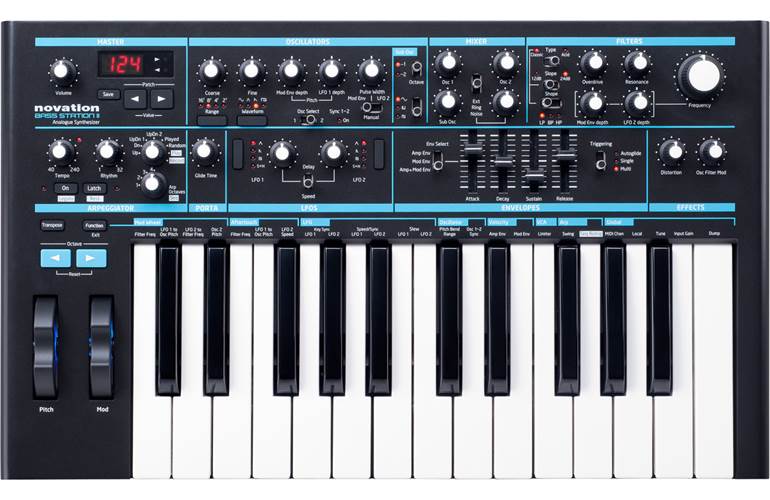 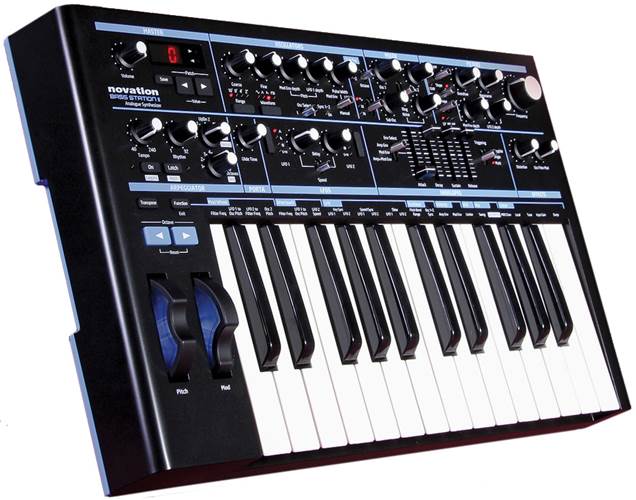 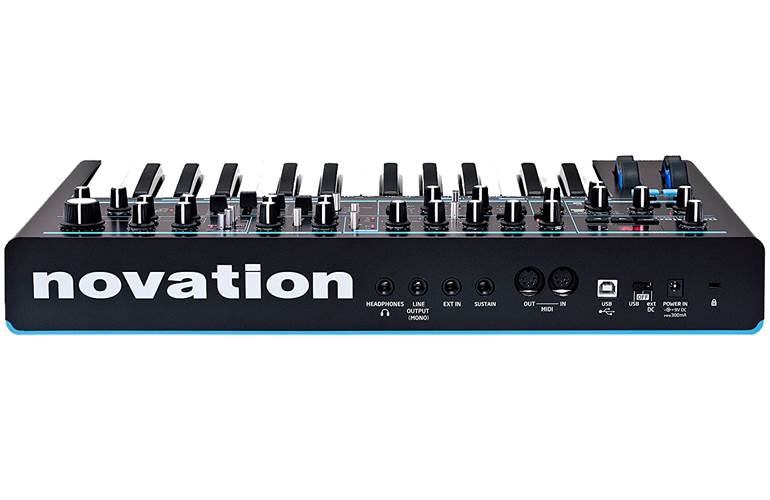 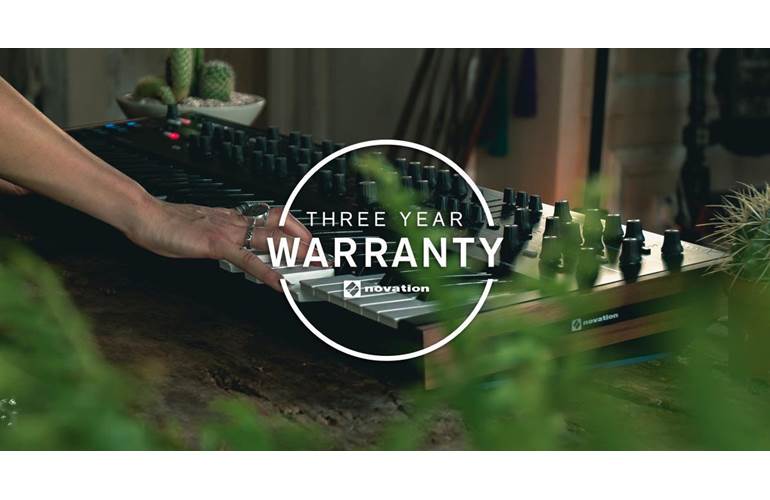 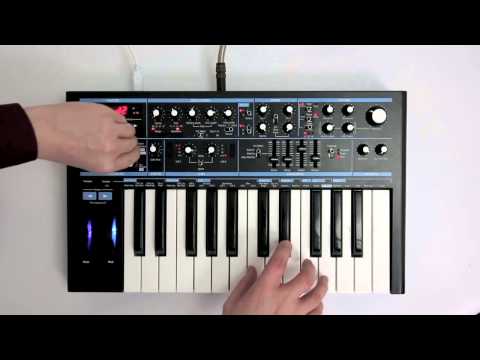 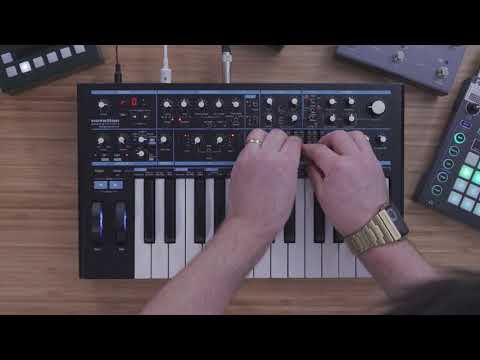 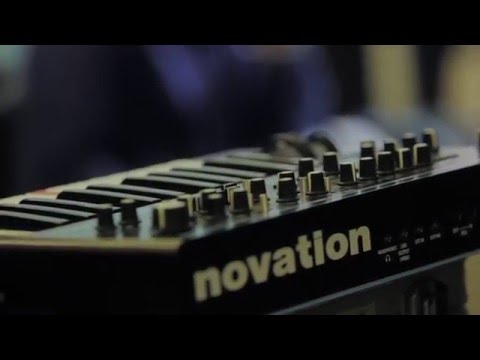 This synth has seriously impressed us here at guitarguitar! It's a fully analogue mono synth with loads of control and massive low-end! It's full of cool features and sounds for sure but it's the playability and fun that keeps us coming back to it!

So the signal path is completely analogue: the only digital parts are the memory (so you can save patches) and a feature for keeping the tuning rock solid and correct. Analogue synths do tend to drift a little so this is a most welcome addition! In terms of the synth path itself, you have 2 oscillators and a sub oscillator at your disposal to play with. Fire these through the LFO and ADSR sliders then filter your sounds through one of two included analogue filters: 'classic' and 'acid' for more aggressive frequency responses. There are also two separate overdrive circuits on the Bass Station and you can blast them both simultaneously to really grunge up your signal.

The fun doesn't end there: there's also a step sequencer and a pattern arpeggiator to let you build up riffs and sequences with 16 steps! You can power this crunchy, fat synth by mains or USB if you want to, which is really useful when plug spaces are a premium! The 25 velocity-sensitive keys feel solid and pleasurable to play and there's assignable aftertouch too. For a list of features, that's pretty great! And the best part is, it's a fantastic sounding synth! We honestly don't understand why every electronic musician doesn't have one of these!

Twenty years ago, Novation released the groundbreaking BassStation: a compact, analogue synth designed for fat bass sounds and bubbly leads. The original BassStation became a classic; now we present the new Bass Station II: an analogue monophonic synth but with a total re-design that brings it firmly into the 21st century, bigger and bolder than ever. It’s more than a bass synth; it’s versatile enough to kick out sharp leads and crisp arpeggios.

Bass Station II’s signal path is all analogue, including the effects section. It is based on three analogue oscillators (two independent oscillators plus a sub for rich bass sounds) and a noise generator; two discrete filters, Classic and Acid, with built-in overdrive; Distortion and Osc Filter Mod effects; two ADSR envelopes, two LFOs, and an Arpeggiator and programmable Step Sequencer. And that’s just scratching the surface of the synth engine. Bass Station II’s traditional control layout breaks everything into modules with dedicated pots, switches and sliders. Unlike a traditional analogue synth, there’s plenty of storage for your own sounds – there are 64 factory presets plus 64 more slots for your own sounds in the hardware – and you can store more on your computer.

Bass Station II is built on three analogue oscillators and a noise generator. There are two fully independent oscillators plus a sub oscillator (which is the critical component in creating rich, analogue bass sounds). Oscillators One and Two are switchable between sine, sawtooth, square and variable pulse width, and Oscillator Three - the sub osc - can be set to one or two octaves below Oscillator One. It can be square, sine or narrow pulse width, delivering the characteristically ‘fat’ bass tone.

You can select between two discrete filters - ‘Acid’ or ‘Classic’ - each with a built in overdrive for pushing filter tones from dry, to warm, to nasty! The ‘Classic’ BassStation filter can be switched between low pass, high pass and band pass at 12 or 24dB slopes. The ‘Acid’ filter is based on a diode ladder filter design that delivers a characteristically 303-esque sound that is designed to squelch!

Bass Station II has two effects (not including the filter overdrive). Analogue distortion drives circuit components to add new frequencies to the sound. Bass Station II’s Distortion function can add gentle warmth, filthy granularity and anything in between. The second effect is ‘Osc Filter Mod’ which creates a distinctive FM-type sound by using Oscillator Two to modulate the filter frequency. This is very good at crunchy, sound-mulching effects that substantially fatten up bass and lead patches.

There are two envelope generators and two low frequency oscillators (LFOs). The first envelope is an ADSR amp envelope and the second is a mod envelope that can be used to modulate filter frequency, oscillator pitch and osc pulse width. LFO One is dedicated to pitch modulation whereas LFO Two is used to modulate osc pulse width and filter frequency. Although it looks like there are four LFO waveforms, the ‘LFO Slew’ function can be used freely to sculpt LFOs into smoother wave-shapes.

Bass Station II’s Arpeggiator and Step Sequencer are killer performance and production tools. The Arp can be directed to run through 32 different rhythmic patterns in different directions with a switchable octave range. You can also engage the Step Sequencer. Up to four sequences can be played in – with legato and rests – and played back using any one of the 32 rhythmic patterns. As well as getting ideas down quickly and programming performance sequences, this is a brilliant way to preview patches whilst you are editing your Bass Station II Analogue Mono Synthesizer.

Electronic music legend Richard James, aka Aphex Twin, has already played an instrumental part in the Bass Station II story, having provided guidance for the implementation of the micro-tuning added with Firmware v2.5. His conceptual contribution to v4.14 is even more profound, however.

Letting his imagination run riot, Richard envisioned the decidedly radical notion of having a discrete set of synthesis parameters assigned to each note of Bass Station II, either variations on a ‘seed’ patch, or disparate sounds designed to constitute a chimeric whole. Although this sort of thing could already be kludged using very fast program change messages, having multiple sounds active at the same time would clearly be a far more creative and efficient system.

AFX Mode is the realisation of James’ out-there concept. Put simply, it lets you modify your Bass Station II patch on a key-by-key basis. Use it to introduce subtle changes to a sound as you play up and down the keyboard; divide the keyboard into multiple zones (one per key if you like!), each playing its own sound; or create entire drum kits in a single preset for triggering manually or via the Arpeggiator. It’s a truly inspiring feature that really does open up a whole new world of sound design and performance possibilities.

Helping you find your new sound

Music making is all about the journey, and we’re always looking for new ways to inspire you along the way. That’s why we’ve created the Sound Collective. Receive free versions of the most innovative software instruments and creative FX from developers we admire, as well as discounts to help you make the most of third-party software, exclusive to Novation customers. All you have to do is register your Novation gear, and one offer will be featured in your Novation account every couple of months.

Well it's an analogue synth - what's not to like? 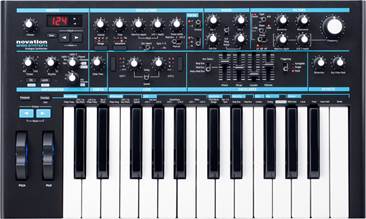 We'll get in touch when the Novation Bass Station II is available.