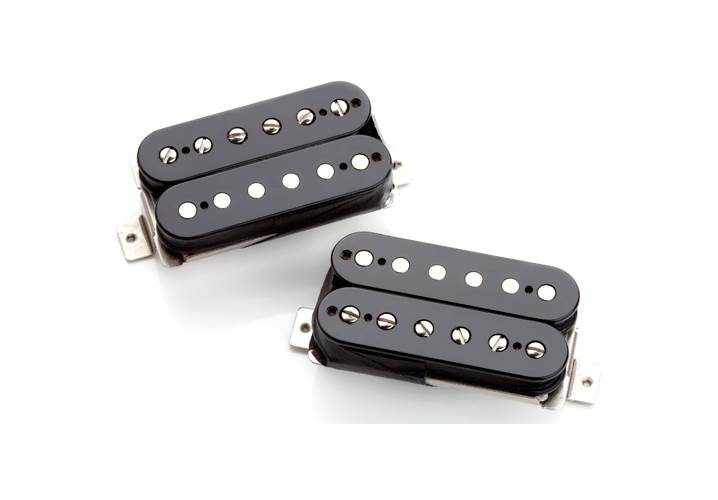 Seymour Duncan are perhaps the most famous brand of guitar pickups in the world. Since the 70s, Seymour and his team have hand built an ever-increasing range of premium pickups for electric guitar, bass and acoustic instruments.

Seymour Duncan use the best copper wire and magnets to create their pickups. Models range from recreations of vintage classics to, more often, original design pickups that bring a whole new world of sound tho the musician. All styles are catered for, from 50s pop to traditional Jazz right through to the most aggressive modern metal.

Changing pickups in your guitar is the quickest and most cost effective way to alter or upgrade your sound. Seymour Duncan will almost certainly have a pickup that’s perfect for you with a level of quality that’s unmatched.

If you have an appetite for great guitar sounds, you’ll want to know all about this set of pickups!

Considering that Slash has a tone that is envied by guitarists across the world, it comes as no surprise to learn that this set of humbuckers is amongst Seymour Duncan’s most popular. This pair of pickups are direct replacements for standard-sized humbuckers.

Slash collaborated with Seymour Duncan to recreate the sound of his favourite mid 80s ‘Appetite’-era LP copy guitar. There is a certain midrange response Slash likes and these pickups have been designed to capture that.

These units are moderate in output and make use of alnico II bar magnets along with a custom winding spec to nail that famous tone.

This set is available here as black open coil humbuckers.

We recommend these pickups for any guitarist who favours thick, classic tone, regardless of genre.

Like the standard APH-1 Alnico II Pro, which Slash has used for years, the Slash APH-2 set uses Alnico 2 magnets. However, the Alnico II Pro Slash is wound with just enough boosted output to push a stock Les Paul toward the sweet sustain and rude crunch that characterize Slash's sound. In addition, Seymour Duncan enhances the APH-2 pickups with some of the same appointments found on the Duncan pickups seen in Slash's '86 recording axe: a single-conductor cable, a long-legged bottom plate, and a wooden spacer. For true fans, or for players who want to capture Slash's recorded tone, these Seymour Duncan pickups are a critical part of the tone chain. These are same pickups found in the newest Gibson Slash model Les Paul guitar.

With the ubiquitous top hat and shades, a mop of black curls obscuring his face, and a blazing electric guitar tone blasting through a wall of amps, Slash epitomizes the very reasons we first air-strummed a low-slung tennis racquet in the privacy of our bedroom. For over 3 decades Slash has relied on Seymour Duncan pickups for his guitar tone.

Always A++ Hot picks, ideal for that bluesy vibe