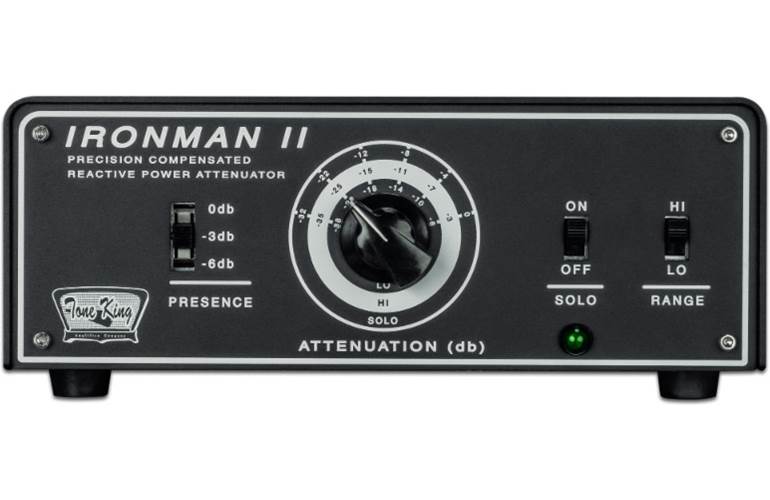 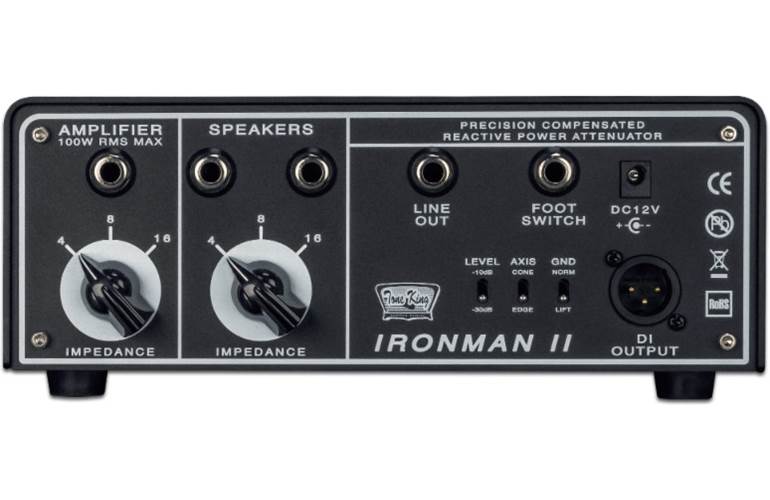 The Tone King Ironman II is a 100w precision compensated reactive power attenuator with a sophisticated design that allows you to reduce the volume level at the speaker(s) while allowing the amplifier to operate at full output power. The Ironman II preserves every ounce of the tone and feel of your amplifier, for natural power-tube overdrive and distortion. The 18 distinct attenuation settings let you choose the amount of output power that is being sent to the speakers, while the rest of the amplifier's power dissipates within the Ironman II.

What makes the Ironman II work unlike any other attenuator is the tuned reactive load and the transformer coupled power division circuitry.

Ideally, the load seen by an amplifier should have the appropriate complex impedance curve so that it responds as it does to a real speaker load. A real speaker load varies greatly with frequency. For example, the impedance of a typical "8 ohm" speaker may rise to 60 ohms or more at its resonant frequency (usually around 60-80Hz), and then rise again to many tens of ohms at high frequencies. An amplifier responds a lot differently when driving a complex load like this, compared to a simple resistive load (as is used in most attenuators). Tone King developed the Ironman's reactive load circuit by matching the results of impedance curve measurements, ran on an actual speaker and then tweaked the resulting design through an empirical method in order to create a load circuit that is most effective at preserving the tone and feel of your amplifier.

The second part of the equation is the circuitry that divides the power from your amplifier between the speaker and the load. In other attenuators, this is often done with a resistor ladder. There are two problems with this approach - first, the resistor ladder itself can become a part of the load, which means that the amplifier sees a simple resistive load. Second, in dividing the power this way, a voltage divider is effectively formed between the dividing network and the speaker. Since the speaker has a complex impedance that varies with frequency, the result is that the frequency response at the speaker is altered, usually dulling the top end and muddying the sound. To address this, the Iron Man II uses 100% transformer coupling via a set of custom audio transformers, so that the connection between the amplifier-to-load and between the amplifier-to-speaker is purely transformer coupled at every step of the attenuation dial. This is an expensive and elaborate design (each step of the dial requires its own tap on one of the custom transformers), but is significantly more effective at preserving the tone and feel of your amplifier than other methods.

Solo Mode
The Ironman II provides a unique Solo mode which can be engaged using the included foot switch. The Solo function selects between the Solo and Lo/Hi range setting of the attenuator allowing you to toggle between with 2 different volume levels. This is useful for giving the guitar that extra volume kick needed for a guitar solo that cuts through the mix or two rhythm level settings.

Use as a Dummy Load
The Ironman II may be used as a dummy load, to provide a proper load for your amplifier, with no speakers attached. This is typically done in recording, where the Ironman II's Line-Out will be used to drive a mixing board, or when an amplifier is being "slaved" to a larger amp (with the Line-Out signal driving another amplifier).

Presence Switch
The Presence switch provides subtle control of brightness and compression. It allows you to tailor the response to match your acoustic environment, and to correct for an overly bright amplifier. Three settings are provided: 0db (brightest setting), -3db, and -6db (darkest setting).

Line Out
The Ironman's Line-Out jack provides a line-level signal that can be used to drive another amplifier, mixing board, computer sound input or any other line level input.

We'll get in touch when the Tone King Ironman II 100W Attenuator is available.