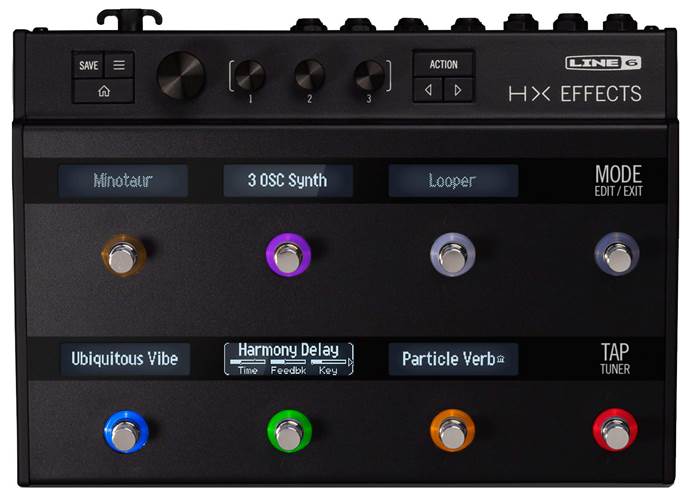 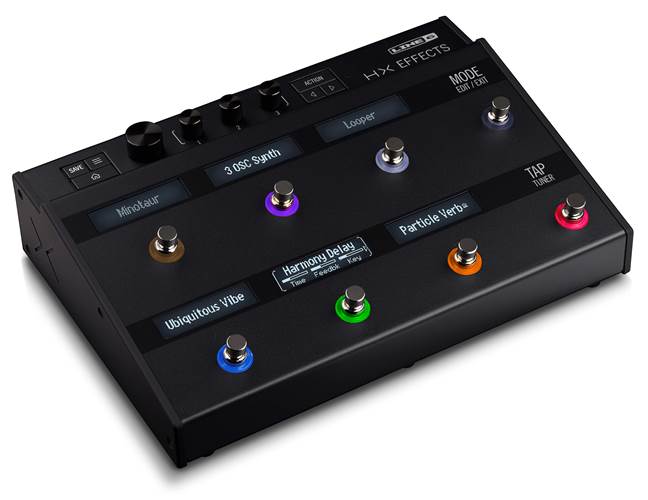 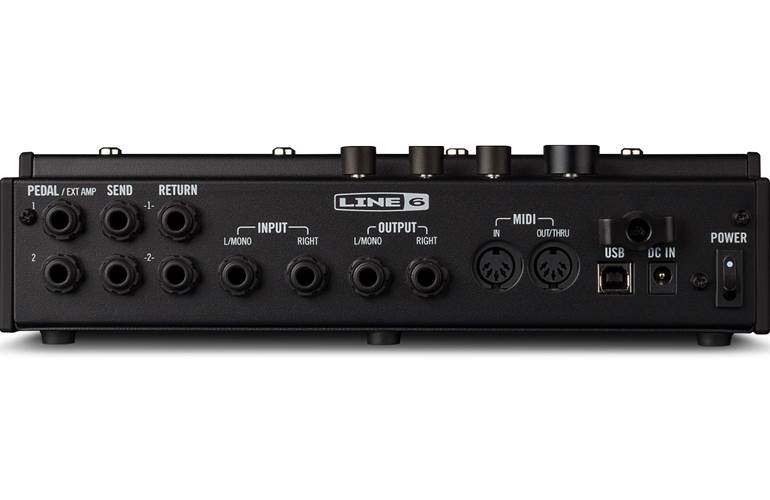 HX Effects features 100+ effects taken from the award-winning Helix hardware and software processors, all in a compact, pedalboard-friendly format, and up to nine effects can be run simultaneously. In addition, legacy effects from the acclaimed Line 6 M-Series and Stompbox Modeler pedals are also included. Effortlessly edit effects using the eight capacitive sensing footswitches, six scribble strip LCDs, and colour-coded LED rings. Simply touch a footswitch with your finger to instantly jump to any effect, quickly adjust a parameter, or assign controllers. HX Effects also offers a choice of analog bypass or DSP bypass with trails, and an industry-leading 123dB of dynamic range delivers tremendous depth and ultra-low noise. Extensive routing and control options provide flexibility in the studio or on stage, and facilitate easy integration with traditional pedalboards and amps.

HX Effects accurately recreates the beahviour of even the most idiosyncratic vintage effects by modeling their individual components. For example, the Transtronic process emulates the unique behaviour of multiple germanium and silicon components, making it possible to authentically recreate fuzz, distortion, and other pedals once considered too persnickety to convincingly model; and the Throbber is a "virtual lightbulb" that mimics the decidedly nonlinear behaviour of the small incandescent bulb and four photocells inside the original Shin-ei Uni-Vibe pedals that are essential to their unique sound and vibe.

sturdy build, big selection of sounds,and good software editor ,there is a learning curve to climb if you want to get the most from this effects unit, but it is worth persevering

Love it. Great bit of kit!

An geat bit of kit. It's amazing how far technology has come.

amazing features,effects all easy to create

Great piece of kit which is easy to use and packed with features. Well worth the money. Sounds are amazing and very easy to edit.

You always have to have in mind what you plan to use the item for and what the competition is. For me, this was purchased to use with normal amps either valve or a DV Mark. I was probably more leaning towards wanting reverbs and delays but have to say the overdrives etc are fantastic. They are comparable to my AX8 and better than the ones in the DV Mark. Plenty of flexibility and options and as of yet I haven't tested out everything for controlling external gear. Easy to use via the onboard stuff and also with the PC editor. Those buying this type of device need to have some patience. Every time I have used digital modelling (including the AX8 and DV Mark) the initial impression has been poor. You have to spend time honing the sounds to work with your gear especially with this effects only HX box. So many things need to be got in balance but once you have homed in on a couple of settings you can use them for all your other presets. It is simple to use so you can't complain about that. Construction wise it is not in the same league as the AX8 but that is as good as it gets from my point of view. This at L400 is a great price. I've had more than L300 worth of overdrive pedals in use at one time and managing them is a nightmare. Cables playing up, tap dancing etc etc. Personal choice of course but it is very convenient without sacrificing sound.

Best service, best prices, great delivery and packaging. This item was bought on line and the companies staff are knowlegable and professional in handling the products. Everything is prompt, helpful and efficient. I have always had a great experience shopping with Guitar Guitar

Lost of stuff in a small box. Lots of ways to be use with the fx loops, amp channel switching and midi. You can also use up to nine loops on any preset witch means you can have all your fav pedalboard in one small place. Save room on your board for your best pedals or just use this as your main pedalboard

Perhaps it's my age but it has taken me a while to get used to this unit. I have a Boss GT 1000 and that is a far better unit in terms of ease of use and sound quality. In time I will get there and maybe it is not fair to compare these products. 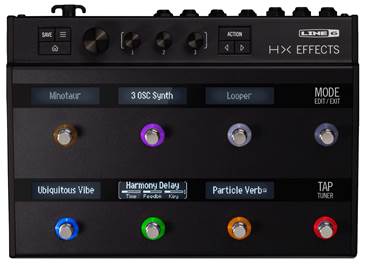 We'll get in touch when the Line 6 Helix HX Effects is available.