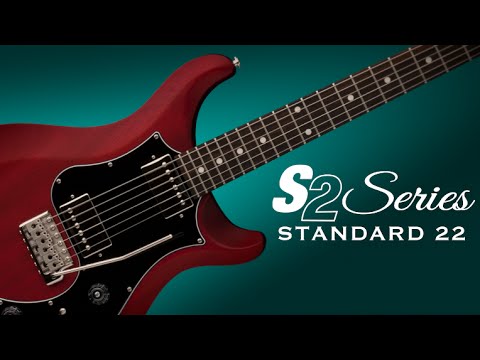 PRS’s S2 range has been a hit since they were released a couple of years ago. USA made guitars, stripped to the essentials and ready to rock, the S2 range provides an affordable pathway to play an American made PRS.

The Standard 24 is a double octave, tremolo equipped workhorse. With a familiar wood choice of mahogany for the body, a set mahogany neck and rosewood fretboard, this guitar has a lot of punch and sustain, as you may expect! The body shape is similar to a PRS Custom 24 up to a point but has its own contours as well as a specially shaped pickguard on the face of the guitar to give this model its own identity.

This stripped-down axe is ready to hit the road with you and sit in on any session. A set of 85/15 S humbuckers add some clarity and sweetness to your playing. They are based on a hugely successful pickup design by Paul Reed Smith himself and translate a hot biting tone to accompany that clear precision.

The 22 fret rosewood fingerboard has a 25" scale, the classic choice for PRS guitars. This is on a ‘Pattern Regular’ Mahogany neck, a comfortable carve that has proven a hit with PRS fans over the last few years.

PRS's celebrated tremolo design is present here: you'll get plenty of dive and wobble without going out of tune, thanks to good design, locking tuners and a headstock design that allows straight string pull.

This Standard 22 is Frost Blue with dot inlays. There is no prescribed sound associated with this model: you sculpt out your own sonic avenues with this highly capable instrument. Take this great guitar along to your next rehearsal and see the difference that PRS makes.

We'll get in touch when the PRS S2 Standard 22 Frost Blue Metallic Dots is available.