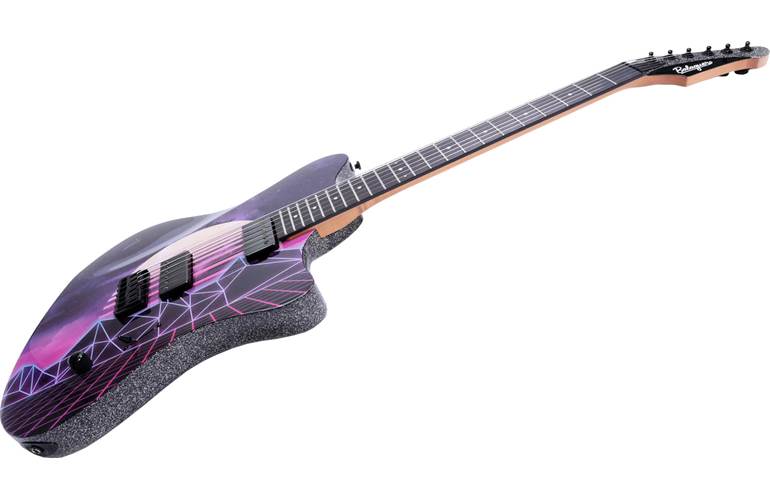 Sent from the distant future of 1983, the Balaguer Select Series Limited Run Synthwave Espada is a striking offset guitar, designed to turn heads and melt faces. The first thing you'll notice about this guitar is that beautiful synthwave landscape graphic and seriously, what shredder doesn't want a guitar with laser beams on it? But it's not all about the looks, behind the glitz and glamour you've got a serious hot rod of a guitar. From the powerful Evergreen humbuckers with coil-splitting, to the locking tuners and brass hardtail bridge, this is a machine that's built for speed! Studio to the stage and everywhere in between, this guitar is always going to look and sound truly outrageous!

This Espada is part of limited-run of guitars dedicated to the Synthwave aesthetic. Synthwave began as a niche music genre that took influence from synth-laden film scores from the 1980s (think Terminator, Escape From New York and Blade Runner) to create a unique form of dance music using the same type of sounds. Quickly evolving into a massively influential movement with its own distinctive visual style and many sub-categories of music, Synthwave's influence can be found everywhere from shows like Stranger Things and Black Mirror to video games like GTA V and Far Cry 3.

One thing we love about Balaguer is how they go out of their way to make sure each guitar delivers on performance and reliability. With incredible build quality, components and design across the board, when you buy a Balaguer, you're getting a premium guitar, regardless of price. Each Balaguer guitar also includes a heavy-duty gig bag which includes a removable neck support and two padded shoulder straps.

Balaguer’s own Evergreen pickups are designed for the player looking to play loud. These are medium output humbuckers that can be coil-split with the push/pull knob. Meaning they cover a lot of tones, including tight shreddy leads, edgy riffing and even pop/funk clean sounds.

We'll get in touch when the Balaguer Select Series Limited Run Synthwave Espada is available.