Dream Theater’s chief visionary - and unspeakably talented guitarist - John Petrucci has been a highly visible Mesa/Boogie user for decades. This dedication has been rewarded in the form of the JP-2C signature amp head. This is quite a special amp, not just for Petrucci fans but for all Boogie fans since it’s effectively a reissue of the fabled Mark IIC+ amp (one of the most coveted early 80s amps Boogie have ever produced) with a few extra functional additions requested by John.

Each channel uses the circuit voice of the IIC+ and develops from there: the clean channel has been tweaked to allow for more headroom; the crunch channel now has the same amount of gain available as the lead channel but the channel itself is more tight and focused and the Lead channel is the ultimate, most expressive and distorted Boogie channel ever! Channel 2 is pretty much the original Mark IIC+ lead channel, allowing the JP-2C to go further with its own lead channel. Each of the high gain channels also has its own graphic EQ channel too so you can absolutely sculpt the exact tones you want.

There are even more features on this amp like the gain pull and the pull presence as well as a great ‘shred’ function that to us sounds like what happens when you place a ‘screamer’-type pedal in front of a sizzling high gain amp: it’s a very clever addition and works excellently! Other features include a tube FX loop, MIDI functionality and a great DI out with a cabinet simulator (having heard Mr Petrucci live playing through the DI of his JP-2C, we can confirm that it sounds absolutely earth-shattering) all of which combine to make this amp a fully spec’d, highly impressive amp that sounds spectacular.

Unit is in great condition, but missing the amp cover and original box. 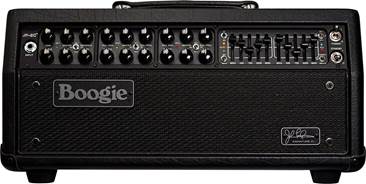