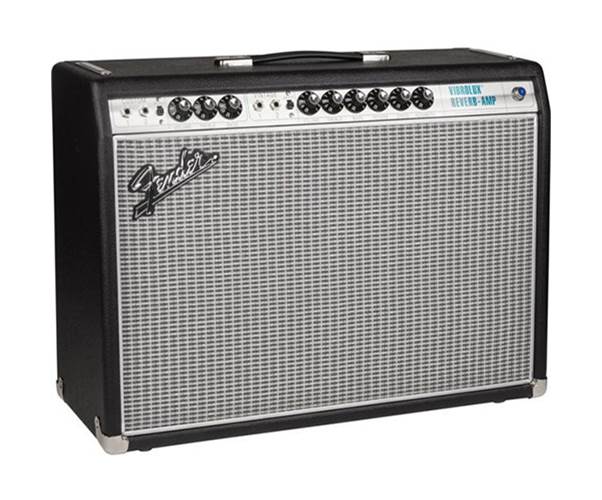 The preeminent classic Fender tube combo. The Fender Twin is an ubiquitous as the Marshall stack, recognised the world over as a stalwart of the stage. The Twin is deafeningly loud -anyone who's stood in front one whilst playing a Telecaster on it's bridge pickup wont forget it in a while - but that loudness and headroom is why it has earned its place in musical history. Clean guitar sounds will always be compared to a good single coil guitar played a Fender Twin.

This lovely USA-made amp is a reissue of the ‘silverface’ ’68 era Twin Reverb. Blasting out 85 watts of clean tube power, this Twin really defines that outlaw sound with tons of twang, beauty and body.

Two 12 inch Celestion G12v-70 speakers supply the large and three-dimensional sound that both fits in a mix and also dominates with authority.

One of the great things about the ’68 Twin is the addition of the ‘Bassman’ channel: that is, the second channel has the same tone stack as a vintage Bassman for a distinctly different tone that is as legendary as the Twin’s. Channel one is pure Twin all the way!

Less obviously for a Twin, you can get really good crunch tones, too. And at sensible volumes! This is down to Fender reducing the ‘negative feedback’ and letting the amp break up a little quicker. You can still have the ridiculous clean headroom too.

Both channels share the tremolo and spring reverb so the classic lushness will be available whichever road you decide to go down, channel-wise.

This ’68 Twin Reverb gives you massive amounts of volume with two of the greatest clean sounds ever gotten from any amp as well as a crunch tone that is not an afterthought. With this and a few choice stompers, you will be prepared for any gig at any venue with some of the best sounds ever.

We'll get in touch when the Fender 68 Custom Twin Reverb is available.