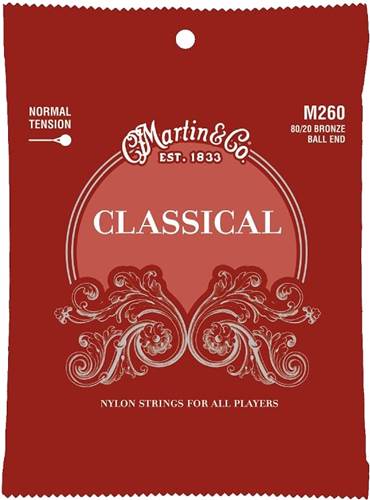 These strings are made of crystal nylon and are offered in an 80/20 bronze normal tension (M260) ball end for ease of stringing up your classical guitar.

Not tried yet, soon to go on

I'm not a classical player and every time I've needed to restring one of my nylon strung guitars I've had to re-learn how to tie off the strings at the bridge and be nimble-fingered to do so. That's why I like ball end classical strings. One issue I have had in the past with these strings is the knot on the high E and B strings pulling partly or all the way through the plastic ball which ends up distorting and squashing partly into the string hole. I now tie an extra knot over the existing one to enlarge it and I also place small red fibre washers (found between the metal stand-offs in a desktop PC chassis and the motherboard) over the string before threading it through the bridge hole to stop the plastic ball from being pulled partly into the hole.

Because nothing is ever perfect.

The Martin strings have a nice crisp tone. The ball end strings look easy to replace, so I might have a go at replacing a string myself the next time.

The banjo is very good but just has a straight out of the box feel about it. Not enough attention to detail of the set up.

We'll get in touch when the Martin Classical Ball End - Bronze Wound (Reg Tension) is available.