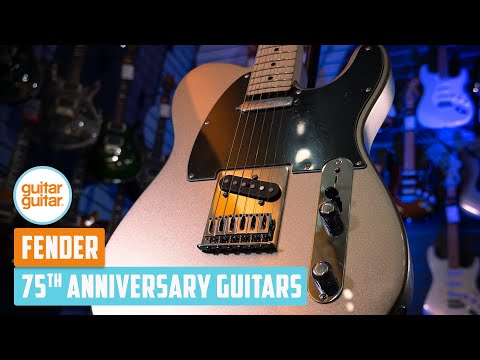 The 75 Anniversary Telecaster  from Fender is built to celebrate the 75th Anniversary of a certain Clarence Leonidas Fender creating the Fender Electric Instrument Company - and changing the face of modern music forever!

The Telecaster is Leo Fender's original, iconic electric guitar design - the one that changed everything. This celebration model brings all that classic twang and delivers it in a limited edition Diamond Anniversary finish with premium appointments like the Vintage-Style '50s singlecoil Telecaster pickups, matching painted headstock and "Modern C" neck shape.

Celebration of a Classic

This model has been produced to celebrate the 75th Anniversary of the Fender Electric Instrument Company, and the Telecaster is the design that changed everything in the world of electric guitars. From Luther Perkins to Brad Paisley, Bill Frisell to John 5, Steve Cropper to Jason Isbell, the Telecaster has strode the stage in the hands of legends for decades, defining the place of the guitar in music as it goes.

This 75th Anniversary Telecaster sports Fender's limited edition Diamond Anniversary finish, with matching painted headstock. This gorgeous, off-gold sparkle finish will look fantastic on any stage - and it won't be around for long, Diamond Anniversaries don't come along every day!

This model boasts a range of modern features, however, including the superb Vintage-Style '50s Singlecoil Telecaster pickups for that classic 'Tele' twang and bite, 6-Saddle-String-Through-Body Telecaster bridge for enhanced resonance and sustain, and the "Modern C" neck profile, medium jumbo frets and satin neck finish for supreme comfort and playability.

We'll get in touch when the Fender 75th Anniversary Telecaster Diamond Anniversary is available.