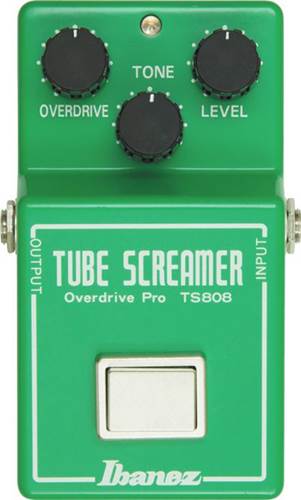 The Ibanez TS808 Tubescreamer Reissue is a recreation of a true classic. This simple yet versatile overdrive pedal can be used to add a bit of bite and spice to clean sounds and tighten up distorted tones. It can be left on as part of your overall electric sound or used as a boost for soloing or rhythm parts that require a bit of grit.

The original Tubescreamer was designed to mimic the sound of a tube amplifier, like many classic vintage pieces of equipment. It has gone on to have its very own signature sound that players love. This new Ibanez pedal is an accurate recreation of the most desirable incarnation of the Tubescreamer. The original TS808 was considered to be creamier, smoother and more subtle than later versions. The Tubescreamer has been copied many times over the years and thanks to this stunning recreation, Ibanez are giving you access to that very 70s sound without having to pay vintage prices.

True-bypass means that when the pedal is off it's not going to affect your tone. Unlike on budget pedals which can suck the power out of your tone when in the off position. The TS808 sounds beautiful when on and leaves your signal completely untouched when deactivated.

Simplicity is key with the Tubescreamer, the 3 controls give you control over gain, tone and the level which you send to your amp. Offering a wide variety of classic tones through a user interface that's understandable even to complete beginners.

The Tubescreamer can be powered via a single 9 volt battery or from a power supply. So whether you're looking for your first overdrive pedal or to insert into a growing pedal board. The TS808 will make itself at home in any situation.

Theres a reason this is one of the best pedals every made.

it does what i expected it to do !

We'll get in touch when the Ibanez TS808 Tubescreamer Reissue Overdrive is available.