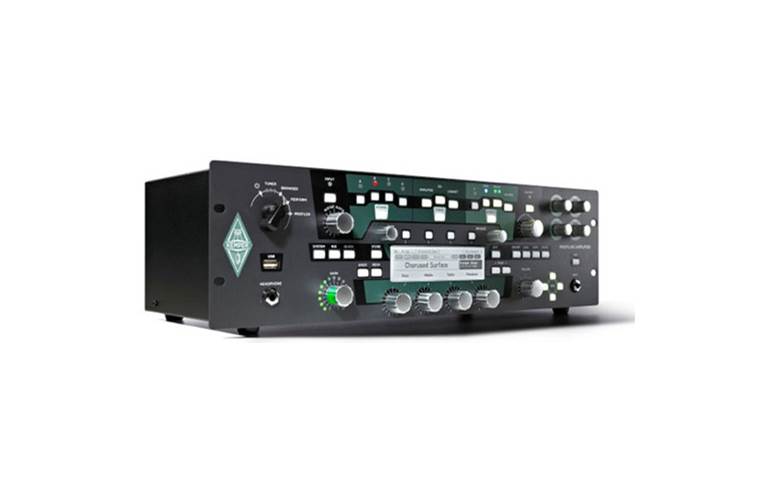 The Kemper Profiler PowerRack packs the same awesome amp modeling and emulation of the original Kemper Profiling Amplifier into a handy 19" rackmountable format, preloaded with a powerful 600W power amp. As with the rest of the Profiler series, the Profiler PowerRack, doesn't limit you to a bunch of preset models. Instead, it lets you create your own amp profiles and call them up whenever you like. What's more, Kemper's high-tech wizardry gives you total tone-tweaking control over your profiled amps, going well beyond gain and tone. Talk about a must-have studio and live performance tool!

200 factory presets, and extensive online resources
Right out of the box, the Kemper Profiler PowerRack has a ton of profiled amps ready to play. Just connect the Profiler PowerRack to your sound system or recording rig, and you're set. And even if you don't have a collection of amps to profile, there are hundreds of profiled amplifiers available online, and the community of Kemper profilers is growing every day.

The perfect link between stage and studio
Ever been frustrated trying to re-created the tone you captured on a recording when you play out live? You'll love the Profiler PowerRack, because it can profile your studio sound while you're recording. Just take a split of the mic you're recording with and use the split signal to connect to the Profiler PowerRack. You'll capture the sound of your studio performance, ready to be recalled on any stage in the world at a moment's notice. What's more, this Kemper Profiler PowerRack comes loaded with a 600W power amp section, so you're ready to rock out live with the same great tones.

Amazing bit of kit! Financed and approval within minutes and despatched the same day! Cheapest around too!!!! I'll be sure to check these guys out first from now...

...It really is a great choice... I would highly recommend the powered kemper option as it is easier to hook up your live kemper sound...

Light to carry and easy to use with superb sounds and effects. Behaves and sounds just like the valve amps that have been profiled. For the cost of one mid priced amp you can have any amp you like.

We'll get in touch when the Kemper Digital Powered Profiling Amplifier PowerRack is available.