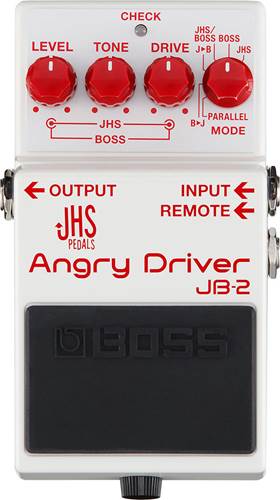 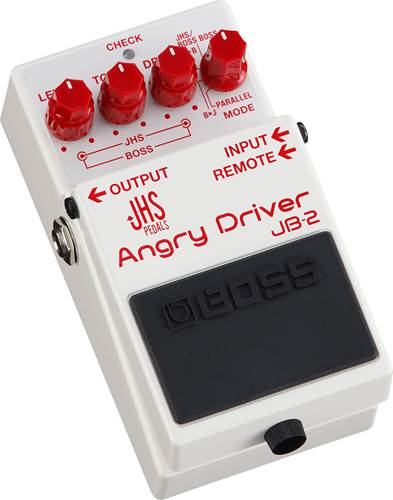 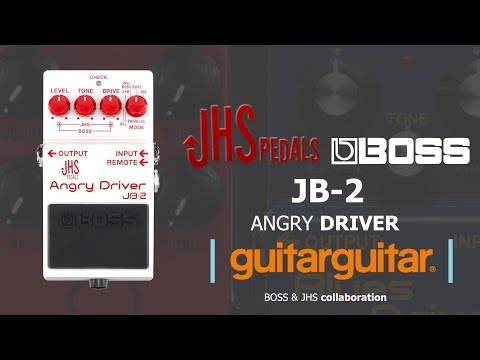 In something of an unheralded move, BOSS have teamed up with boutique pedal manufacturer JHS pedals to create a model that takes a little from both companies, making something uniquely special as they do so.

From BOSS’s side, they’ve brought their classic BD-2 Blues Driver to the table. JHS have thrown their awesome Angry Charlie pedal into the mix: together, we have the Angry Driver!

Not just a clever name, the Angry Driver kind of does in one box what both of these pedals otherwise do separately. You get the superb low gain tone of the BD-2 with the higher gain Angry Charlie sounds too, depending on how your set the unit. Indeed, you can have both at once, each with independent settings due to the dual-concentric control knobs.

There is a six position rotary knob for selecting the mode: one cool feature is to be able to have the Blues Driver signal going into the Angry Charlie and vice versa, whilst another is a Parallel mode for having tonalities from both pedals available depending on picking strength. This dynamic idea makes a lot of sense on a pedal like this and we applaud BOSS for putting so much thought into it.

The sounds are uniformly excellent: regardless of how you decide to use this, you will enjoy some excellently expressive tones, rich in harmonic structure. This is a most satisfying pedal to play, regardless of whichever genre you play.

Could this be the only distortion pedal you need? For a lot of guitarists, that may well be a resounding ‘yes’. It’ll certainly not be a mistake to buy this and attach it to your pedalboard without hesitation!

The JB-2 Angry Driver features three dual-concentric knobs that provide independent drive, tone, and level control for each overdrive type. Via a six-position mode selector, you can use each overdrive independently, or combine them together in series and parallel configurations. With the ability to blend the Blues Driver’s famously expressive low-to-mid gain tones with the Angry Charlie’s aggressive rock voice in any combination, the JB-2 Angry Driver delivers unmatched range and versatility from a single overdrive pedal.

The idea to develop the JB-2 pedal was born of the friendship between BOSS President Yoshi Ikegami and JHS Pedals founder Josh Scott, and their shared passion for innovative pedal design. The Blues Driver has long been a favorite pedal for Josh, and he credits it for leading him into designing his own pedals and starting his own company. “I got into pedals because, as a player, I used two Blues Drivers together for years and years. One day, one of them broke. I opened it up and realized it was just a simple soldering fix. It really sparked my curiosity and that just took over my life, and JHS pedals came into existence out of repairing that pedal.”

Yoshi and Josh regularly visit with each other at the yearly NAMM shows, and they had discussed the idea of a collaboration a number of times. With BOSS celebrating the 40th anniversary of the introduction of the compact pedal design throughout 2017, Yoshi felt the time was right to develop a new pedal together. “In the 40 years of BOSS compact pedal history, this is a first,” Yoshi said. “I think it's a wonderful thing that two companies have collaborated based on a great mutual respect for each other.”

“We’re very excited to collaborate with BOSS, one of our heroes, with the JB-2,” Josh relates. “I've said for years and years that BOSS pedals are my favorite pedals. For JHS to jump into the story of what BOSS has done for 40 years is a real honor, and really beyond anything I would have ever imagined.”

After discussing a number of ideas, BOSS and JHS Pedals ultimately felt that combining the Blues Driver and Angry Charlie would be the ideal match.

“When this plan came up, we used the ES-8 switching system to try numerous combinations of our pedals with the JHS Angry Charlie,” Yoshi relates. “I thought a combination allowing each pedal to complement the other would be interesting to try. The sound of the Angry Charlie is exactly what BOSS didn't have.”

“To experience working on a product with a company that has done this thing so well for so long has been really inspiring,” Josh continues. It’s just amazing to see such talented people that love what they do.” Josh is very pleased with the way the JB-2 turned out, saying, “I am 150-percent satisfied. I love it.”

“For several years, we have been continuing to take on new challenges with the keyword “Breakthrough,” Yoshi said. “I think it's very refreshing and thought-provoking for our engineers to work with such an up-and-coming company and get inspired.”

A Diverse Range of Drive Sounds in a Compact Footprint

With its two drive types, dual-concentric knobs, and six modes, the JB-2 packs an enormous amount of overdrive range in a single-space pedal. The Blues Driver is the lower-gain side, carrying everything from boost to overdrive, and the Angry Charlie carries the medium-high overdrive all the way to distortion.

The six-position mode selector provides flexibility to use the overdrives in numerous creative ways, from individual operation to series stacking and even parallel operation. In series mode, one overdrive works as a booster for the other, while in parallel mode, the overdrive character expressively changes in response to picking nuance. A remote jack extends the pedal’s versatility even further with control from an external footswitch or pedal switcher.

Stunning guitar pedal made by the best

We'll get in touch when the BOSS JB-2 Angry Driver Overdrive is available.