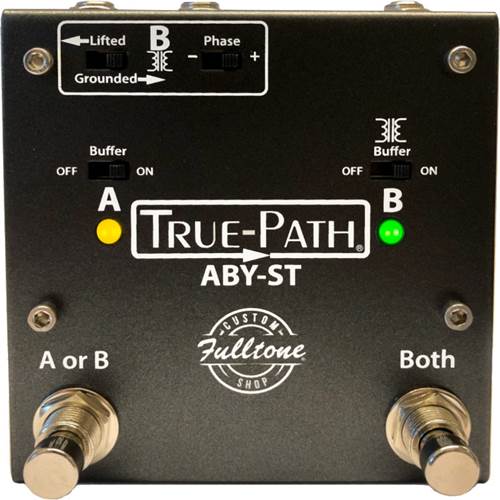 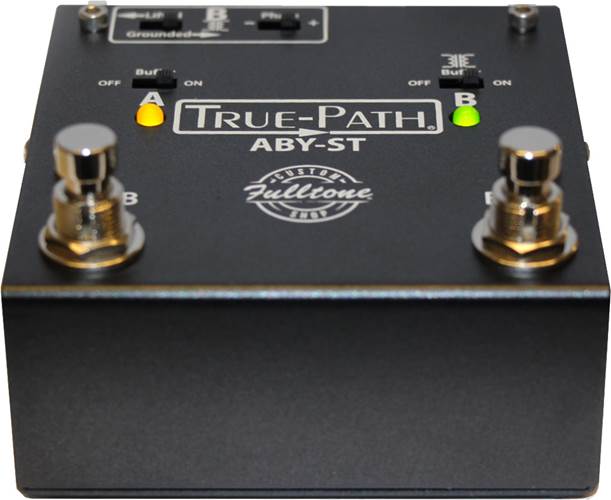 The CS-ABY-ST is now the "v2," Black , still the best ABY switcher in the world, and just got a LOT smaller!

The CS-ABY-ST V2 has silent soft switches. No pops, no ticks, and no electrocutions, thanks to a Nickel core custom-wound 1:1 transformer that doesn't boost the treble frequencies like the "industry standard" transformer does, so fuzzes played through the True-Path sound round and distortions don't sound strident. I can hear it, so can you.

Using the most advanced 4 opto switching system ever, yet also offering the purest signal. I developed our photocells over the last year with a rather patient optocoupler manufacturer (Thanks Fred), and my cells only have around only 50 ohms series resistance compared to the Vactecs (which all other optocoupler switchers use) offering a whopping 300-400 ohms of series resistance to your guitar's signal. I can hear 300 ohms... you can hear 300-400 ohms.

Want to correct the phase between your 2 amps? You got it.

I know the other ABY's says they're silent... but truth is they have a slight "thump" that becomes a loud "BOOM" when splitting say a Twin Reverb and Vintage Plexi Marshall.

Do not confuse this with a simple metal box and 2 switches that comprise 99% of the ABY's out there. Those sound ok UNTIL your signal chain reaches 20 feet or more... UNTIL you hit "Both" and the signal is loaded down to oblivion, or UNTIL you get electrocuted because of grounding issues due to the absence of an Isolation Transformer that the True-Path has!

And don't think that your tone is going to suck because you see the inside of the True-Path and think that your signal is going through a bunch of circuitry. No Audio signal passes through the switches or ANY of that circuity! Your signal is going through ONE RESISTOR in the True-Path (that's the optocoupler), or if you choose, it will go through a tone-full JFET unity gain buffer that is rich and sweet, and perhaps a custom wound Nickel-core Audio transformer (B channel only).

All that gadgetry in the True-Path is simply to light up those 4 optocoupler in a way that they don't POP when switching between amps...NONE of your guitar signal goes through that.

It's pure, it's True-Path, it's Fulltone.

An excellent ABY pedal, unlike other manufactures pedals there are no pops when selecting different amps or channels plus the phase can be reversed the ground lifted and it can be buffered if required a great job. I was however somewhat surprised that the included Switching Pedal Power Supply IPS-9 came with European 2 pins rather than UK 3 pin square so without buying a converter it can not be used in the UK

We'll get in touch when the Fulltone Custom Shop ABY Soft Touch v2 Switcher is available.