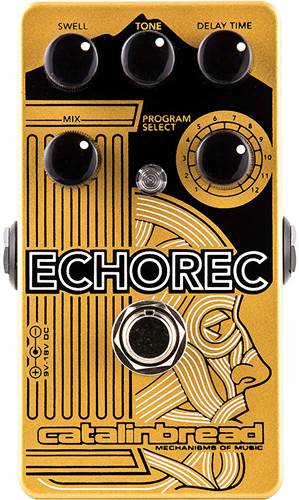 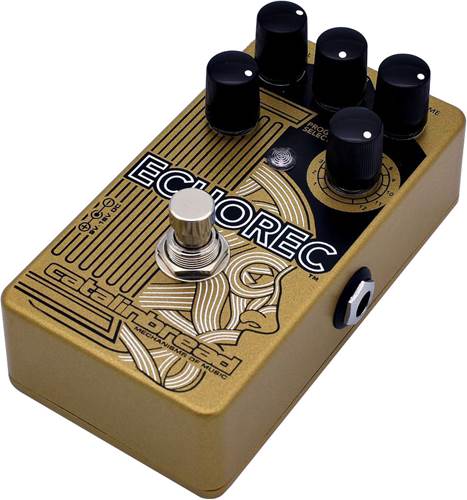 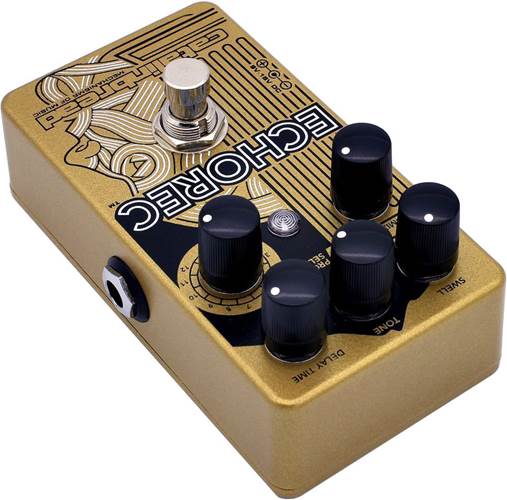 Pink Floyd made the Binson Echorec famous starting back in Syd's day, but it all culminated when the band had 4 of these arcane units on stage at the Pompeii Amphitheater. The Binson Echorec was a magical sounding unit that generates rhythmic echo patterns and ethereal reverby ambience with the Swell (feedback) up. There is simply nothing quite like the Binson Echorec… Problem is they have been impossible to find one that works at an affordable price!

Enter the Catalinbread Echorec. It does everything the Binson Echorec did without the maintenance troubles and costs of the old tube unit. The only sonic liberties Catalinbread took was extending and making the delay time variable, from 40mS to 1000mS. THey figured that if they were going to take this liberty that the delay time knob should be continuously variable, so you can twist the knob warping the pitch. The original Binson was actually true bypass, which turns all the echoes off, making scene changes abrupt. Catalinbread's is as well and also has the option to have trails when you bypass the pedal. Finally they added three combinations of the 4 playback heads that were missing on the original unit.

The feature-set is as true the the real deal as possible. With one very different additional control - delay time. This allows you to go from the stock old school unit maximum delay time of about 300ms all the way to 1s delay time.

There is an internal trimmer that adjusts the randomness and intensity of the modulation. Howard designed a dry audiopath that we don't want to ever turn off, so we decided to include a trails, true bypass switch... We're pretty sure you will always keep your Echorec on trails mode, cause the audiopath is THAT good!

Superb pedal, would 100% recommend to someone!!

Superb delay pedal, the best I have tried, vintage tape sounds, wonderful rythmic patterns that inspire me. Add reverb and drive and you are in a world of your own making.

Emulates a classic electro-mechanical delay effect well. Sound quality is very good and it can be run at 9 or 18 volts for greater headroom. The enclosure is small which can make operating the knobs a little fiddly. Curiously, I had expected the program selector to be a switch with 12 specific positions, but it acts as a rotary controller with no "click" at each option, so one has to set it by ear. Not a major setback, but it limits you to one sound per song unless you want an audience to hear you trying to find the right setting!

crystal clear echoes and easy to use

This a great pedal. does what it says.. simulates the old Binson Echorec as near perfect as possible.. never mind so called "Expert" negative comments ! Can't any more than that!

This is an amazing pedal - very happy with my purchase

Great piece of kit!!!!! Sturdy and delivers what it claims.

The best and most inspiring echo effect I've ever used. I'm addicted!

It gives me the tones and sounds I have been seeking

Excellent product - it does and sounds like the description

It works as well as advertised so, I am delighted with this purchase.

excellent service. I hope to buy again. Thanks

We'll get in touch when the Catalinbread Echorec Delay is available.