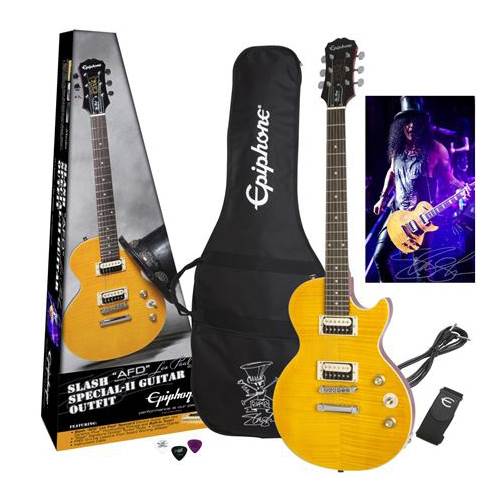 Slash did more to put the Les Paul on the map during the 1980s than probably any other high profile player. His popularity has remained since, so much so that lots of beginner guitarists are inspired to pick up the guitar principally because of him!

Epiphone recognise this and have acted accordingly. Now the beginning player can choose an outfit directly relating to their hero, right down to the guitar having a slash logo on the headstock and the flame maple top painted in the famous Amber finish of his 'Appetite for Destruction' era Les Paul. This guitar also has a hidden electronic tuner built in to the bridge pickup ring!

Also included is a soft gig bag with a Slash logo for carrying around your new guitar in style! This handsome and solid guitar plays really well and sounds nice and raunchy: learn in style with this Slash-approved Epiphone!

Slash is one of Epiphone’s premier signature artists and a member of the Rock and Roll Hall of Fame for his iconic guitar solos in Guns N’ Roses. Slash is the ultimate Les Paul player. And like Epiphone, Slash is on a mission to make affordable professional instruments available to everyone throughout the world. Now, the Slash “AFD” Les Paul Guitar Outfit puts Slash’s classic tone in the hands of new players and pros alike.

You can’t get more rock and roll than Slash and now the man himself has made it possible to fulfill your own Appetite for Destruction wherever you are. Visit your Authorized Epiphone Dealer today and take home a bit of rock history with the Slash “AFD” Les Paul Special-II Guitar Outfit.

Epiphone Slash! What a beautiful present for a total beginner

I love this guitar, though it's maybe not as good as my other Epiphone, and SG. The extras are worthwhile, the tuning thingumy under the pickup is very useful, the gig bag is quality. It's light and sounds good, I think my own only criticism would be the machines heads aren't great. It is a good guitar kit for the money. Love the colour. Love the Slash logos.

Excellent bit of kit. Great deal too from GuitarGuitar.

Great guitar for beginners can't fault it for the money.

My daughter loves this guitar. Beautiful quality and decent price. 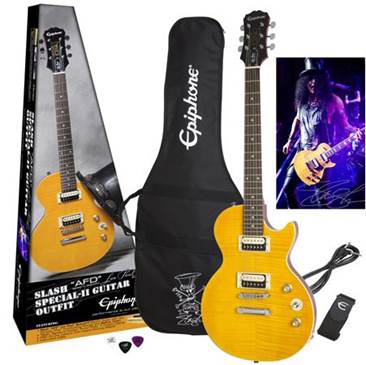 We'll get in touch when the Epiphone Slash AFD Les Paul Special-II Outfit is available.