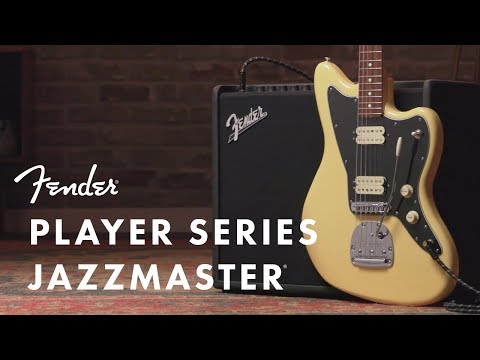 Fender’s Player Series is a fresh update of their most beloved models for today’s contemporary guitarist. The Player Series replaces the Mexican Standard Series and brings with it a host of exciting new features. Each Player Series guitar features 22 frets, new colours, a newly designed neck carve and upgraded pickups. Whatever style you play, you’ll be sure to find a favourite amongst the raft of new models available.

This great new Fender Player Jazzmaster is available in 3 Colour Sunburst with a Pau Ferro pickguard.

I came into store with a few options, but this just jumped out. Striking looks, light weight (which for me was important), well set up and the the coil-tappable humbuckers mean a huge variety of sounds are available. The neck felt great and was really ?fast? to play. A wonderfully modern take on a classic!

We'll get in touch when the Fender Player Jazzmaster 3-Colour Sunburst Pau Ferro Fingerboard is available.