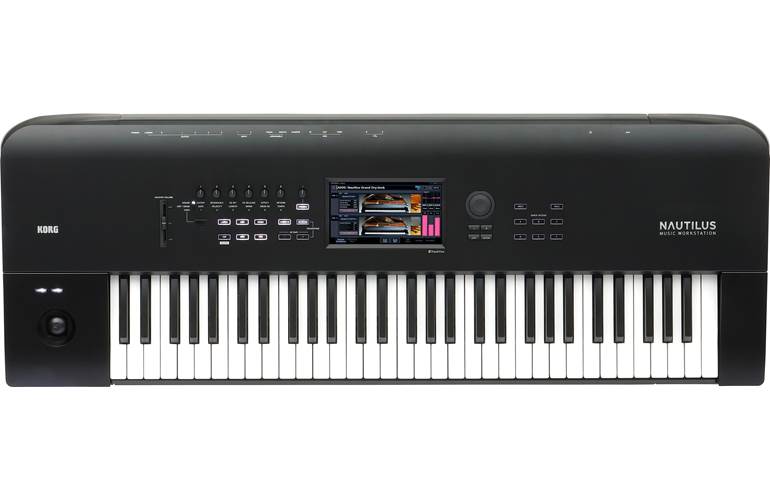 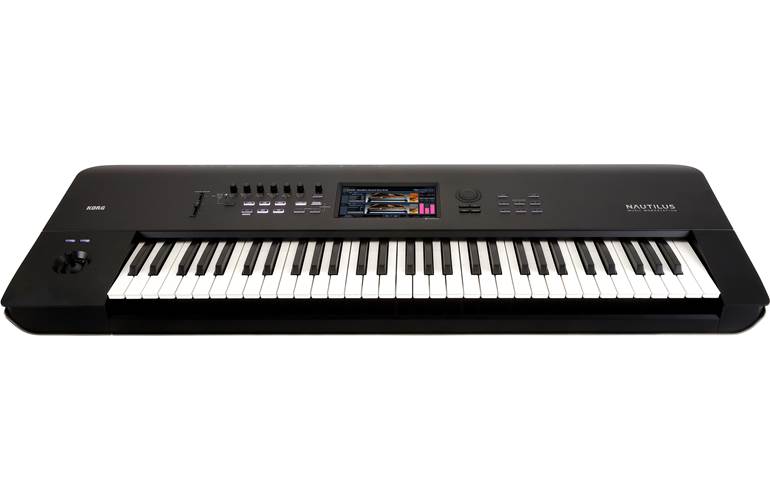 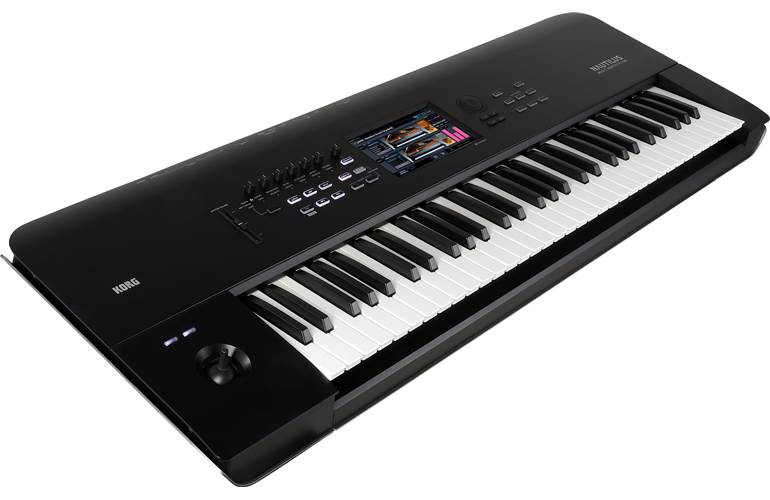 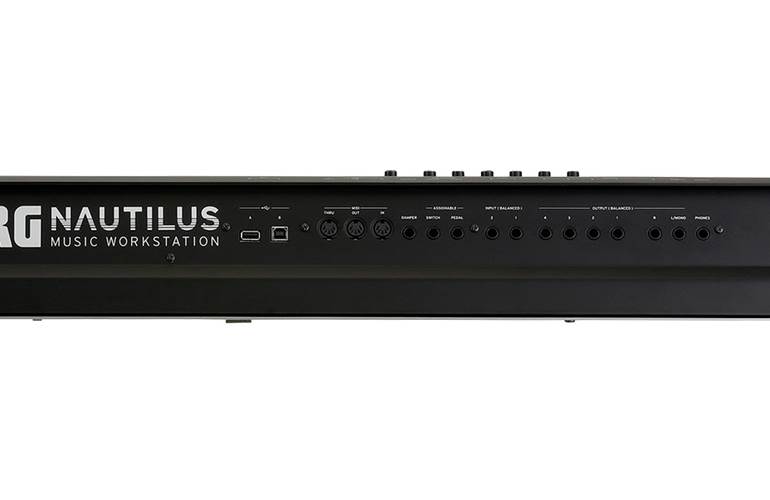 The Nautilus series from Korg is a range of exciting new workstations that derive their power from the industry-leading Kronos series. The Nautilus 61 is the most portable offering in the new Nautilus series. It features a streamlined workflow, nine different sound engines, 61-note Natural Touch keyboard and a whole lot more. There’s so many features packed into this thing it’s hard for us to choose favourites.

You’ll find nine sound engines on board the Nautilus 61, each dedicated to a certain purpose. From top-shelf pianos and acoustic instruments to vintage synthesizers and drum sounds, the Nautilus 61 ensures each sound is stunningly detailed.

Being the younger sibling to the Kronos, the Nautilus features most of the same workstation capabilities. You’ll find 16-track MIDI sequencing for the in-built sounds, alongside 16-tracks of audio recording via the on-board inputs or re-sampling inbuilt sounds. This is plenty to create full-blown arrangements, which you can then export release ready.

The Open Sampler on the Nautilus 61 gives you quick access to sampling regardless of which mode you are currently using. You can sample by recording audio directly into the unit, or by loading your own samples via USB from a computer or memory stick. The 60GB SSD gives you plenty of storage space to pop your samples directly into the Nautilus memory.

Outer packaging shows signs of wear but the unit is immaculate and comes complete with original manual and mains.

The NAUTILUS features nine dedicated sound engines to realistically reproduce sounds such as pianos, electric pianos, organs and more. Preliminary Information – Specifications and features subject to change To start, the enhanced SGX-2 piano sound generator offers delicate expressiveness to capture all the nuances of the acoustic piano, and NAUTILUS features the most piano libraries ever put into one product; with 12-step velocityswitched sound, string resonance and more. The EP-1 electric piano sound generator realistically reproduces seven different famous electric piano sounds. The CX-3 engine – the heart of our sought-after CX-3 reissue -covers the distinct sound of classic tonewheel organs. Add to that MOD-7 VPM/FM synthesis, the PolysixEX and MS-20EX for analog modeling, and the STR-1 for physical modeling, and you have essentially an engine for any type of sound you’re looking to get. Used together in Program or Combination mode, these distinctive engines create completely new timbres.

The approach to the included sound on NAUTILUS, started with KORG setting aside our preconceptions of what sound should be like on a conventional music workstation, and instead focused on pushing the boundaries of sampling and programming to create a brand-new classifications of programs that we divide into three groups:

The NAUTILUS brings you distinctive sounds including phrase loops, prepared pianos, found percussion and more. Many seldom heard-of musical instruments found in different regions around the world can be difficult to play, but distinctive phrases played on these instruments are featured on the NAUTILUS. Use these phrases as-is in your songs— let your imagination be your guide. The NAUTILUS features sounds that were sampled for the first time just for this instrument, including prepared piano sounds created by placing different objects between piano strings and recording samples, or “found percussion” sounds made by turning ordinary items into instruments to be struck. Not only do these novel and mysterious sounds provide an unexpected flavor to your songs, they offer broad possibilities for sound effects used in film and TV music as well.

The NAUTILUS also offers the freshest sounds that blend in well with today's music scene, including synths, drum kits, special effects and more. For synths, be sure to check out the EDM, electro and chiptune sounds for starters. Also, the NAUTILUS features more than 50 kinds of drum kits—sounds that most strongly reflect the changes in music over time. The special effect sounds offer useful material like drums added to dance music to create beats—sounds that you can put to use right away.

We’ve brought together all of the most important sounds a workstation needs including piano, electric piano, guitar, bass guitar and more, covering all genres. For the newly sampled piano sound, we’ve also recorded the lovely sonic ambience of the studio, and you can mix the piano and ambience sound as you like with the new ambience sound. A new electric piano model with a characteristic thick sound has been added, which works great for funky playing styles. We’ve also added many phrases that let you play back actual performances of guitar and bass parts that keyboardists will find useful.

With the DYNAMICS knob, you can instantly control the changes in volume and tone in response to how hard you play the keyboard (velocity); and you can customize this knob in real time to match the keyboard playing feel required for each style and song. Even when playing the same sound, you can turn this knob to get the feeling of playing a completely different sound. By finding just the right setting for your playing style, you'll uncover even more of the possibilities that the NAUTILUS offers. Preliminary Information – Specifications and features subject to change When you activate the DYNAMICS knob and turn it to the left, the keyboard responds more softly to your playing, giving you a wide range of dynamics. This allows for delicate, expressive playing when accompanying a piano solo or vocals, which directly reflects the dynamics of your performance. On the other hand, turning the knob to the right gives a stronger, more flat dynamic response. This brings out the sound when you’re playing in a band or ensemble, which works best when performing with a more even feel.

Make intuitive changes to sounds with the Realtime knobs

The six RT (real-time) knobs at the top left of the panel give you direct control over changes to the PROG and COMBI sounds. A variety of functions are assigned to each knob that lets you enjoy making changes to sounds, such as the filter cutoff and effect depth, the gate time, tempo and swing of the arpeggiator or drum track, the type of snare drum and more. In COMBI mode, you can group timbres and control their levels with the knobs. Further, you can press these knobs into the panel to lock them in place, preventing them from being accidentally changed while you’re playing. For instance, you could use this to enable only the knobs you often use onstage and push the ones in that you do not need.

For the NAUTILUS, we have completely rethought the user interface, considering that panel controls tend to become denser as more functions are added. The interface of the NAUTILUS lets users find just the things they’re looking for once they understand the principles.

The MODE button lets you see what you’ve selected in each mode on a single screen, from PROG and COMBI to the set list, sampling, sequence and global modes. Each mode has tabs for each function, and the PAGE buttons offer more detailed editing with consistent operations. With the user-friendly navigation of the NAUTILUS, you can press the MODE button at any time to return to the start if you get lost. A dark mode is available for the display, using black as the primary color to reduce eye fatigue.

Six quick access buttons are also available as shortcut buttons. The NAUTILUS further offers four templates as a continuation of the previous user-friendly features, which can be used to select modes like PROG and COMBI, as transport buttons for sequencer playback and recording and so on. You can also select your own settings as you like. What’s more, you can freely assign functions you frequently use and save them in one of four sets.

Using KORG’s Open Sampling System, NAUTILUS can quickly sample an external audio source, regardless of whether NAUTILUS is in the Program, Combination, or Sequencer modes. The Open Sampling Mode can even resample the performance of the NAUTILUS itself. The user sample bank, which extends the convenience of the EXs sample library to user samples, allows custom samples to be loaded and played, taking advantage of the gigantic SSD capacity.

AIFF, WAV, SoundFont 2.0, and AKAI S1000/3000 format samples can be loaded into memory via USB memory. Additionally, you can use a USB Ethernet adapter to exchange large amounts of sample data with your computer at high speed. Instruments or samples that you've previously created on your PC can be used to construct a music production setup based on just the NAUTILUS itself.

NAUTILUS features a sequencer/recording section that offers both 16 MIDI tracks plus 16 audio tracks; a great resource for putting together a dazzling performance or a brilliant production. MIDI sequencing makes it easy to capture ideas, inspiration, and pro-quality phrases using the Drum Track, or RPPR (Realtime Pattern Play/Recording) functions.

The 16-track audio recorder simultaneously captures up to four tracks of 16-bit/24-bit uncompressed data at a sampling rate of 48 kHz. Play along with recorded tracks, add effects, and then resample the NAUTILUS itself and place the resampled WAV files directly in a track. When polishing your tracks, feel free to use mixer automation and editing functions such as copy, paste, and normalize to get the results you want.

A separate three-band EQ is provided for every timbre, for every sequencer track, and for every audio track for adjusting subtle tonal balances or for creatively modifying the overall sound.

Smooth sound transitions that eliminate dropouts when changing sounds, regardless of the mode you're in

When you switch program sounds during a performance to get ready for the next section, or when you switch from Program mode to Combi mode, the sound that's currently being output is always given priority and its effects are maintained during the program change, ensuring a seamless transition with no dropouts. This function has also earned extremely high praise from pro musicians.

The NAUTILUS comes with a diverse variety of music software from Izotope including “Ozone Elements” which lets you not only create songs but also master them using AI, “Skoove” which will help you improve your keyboard playing skills, “Reason Lite” DAW software, as well as software synths from KORG and other brands. In other words, the moment you get your hands on this synthesizer you'll have a variety of tools to help you take your music to the next level.