How does it feel to approach life as a lefty?

10 percent of us are left-handed, and for whatever reason, men are somehow more likely to be lefties than women. That's a lot of guitarists, and it’s high time we spared a thought for the plight of these southpaw players!

In the harsh and scary past, those of the sinister disposition were forced into using their right hands with violence and abuse. The term ‘sinister’ comes from the Latin sinistra, which merely translates as ‘left’ but somehow became ‘evil’ during the Classical era. This may be down to superstitions about ‘leftness’ in general being looked on as being negative and unwanted: Ancient Romans saw birds flying on their right-hand side as being a good omen (is this where the notion of the term ‘right’ being used as ‘correct’ came from?) and birds on the left being bad, or sinister.

Those Romans... they were probably the ones who coined the term ‘skating goofy’ to shame those who propel their skateboards with their left foot. It’s a cruel world. Anyway, today's blog takes in the perspective of a left-handed person who plays right-handed (me), and also a lefty who has always played left-handed guitars. We'll look into how those decisions came to be, and what benefits and drawbacks are inherent to each path. Throughout, there will be a liberal smattering of some delicious, top tier lefty guitars from top brands like Gibson Custom Shop, Fender Custom Shop, Martin and Lowden. 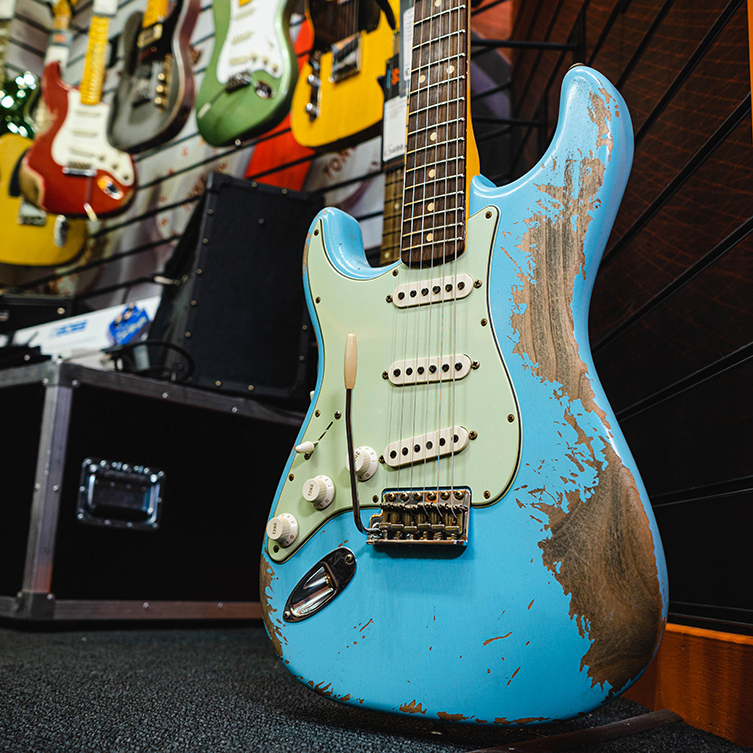 Confessions of a Traitor

This particular writer is a traitor: a left-handed individual in every aspect of life apart from when it comes to playing musical instruments. I write with my left hand, point with my left hand, kick a ball with my left foot...but I play the guitar right-handed, have drums set up right-handed and, weirdly enough (I notice this as I type), feel better with my computer’s mouse in my right hand. This wasn’t the case when I was a young chap playing endless hours of The Secret Monkey of Island on my Commodore Amiga, so something must have changed there...could this be society’s subtle social conditioning? Have my hands secretly submitted to cultural peer pressure?

Since I’m a traitor and play right-handed guitars, I don’t know what it’s like to experience the world of music as a true lefty. I picked up a guitar mainly because my older brother had gotten one and I thought it looked awesome. I’d also just gotten the CD of Monster by REM and was enthralled by the big, juddering noises I could hear throughout the songs. I desperately wanted to mimic them and so set out to play a guitar primarily to do just that. Those incredible sounds heard in songs like Crush With Eyeliner turned out to be nothing more mysterious than the bult-in tremolo effect on Peter Buck's Mesa Boogie amp, but 12 year olds did not have access to such arcane knowledge and so the mystery remained, which only added to the excitement of playing guitar.

The main point is, when I started out, I didn’t know that left-handed guitars existed! I simply saw my big brother's guitar and understood that I needed my own as quickly as possible. Much like the right-handed violin I borrowed from school in Primary 5 (on which I had three agonising lessons before sacking the whole idea), I just assumed that a guitar was a guitar. As such, I cracked on by myself, beginning an obsession that is now over a quarter of a century long.

I was already well on my way to becoming a competent player before I came across the notion of a left-handed guitar and by that point, I'd progressed far enough that it didn't matter. I wasn’t a fan of the Beatles (sorry), so Paul McCartney’s left-handed Hofner bass wasn’t something that was ever on my radar. Kurt Cobain certainly was, but somehow I didn’t even notice his guitar was round the wrong way! If you aren’t looking for them, maybe you tend not to see them?

So: how has this affected my guitar playing? Maybe I'm not the best to judge, but I would say there were short term benefits and long-term issues.

The benefits were that my dominant hand was doing all the ‘tricky’ bits: forming notes & chords, applying vibrato, and of course, getting my adolescent shred on by racing around on the fingerboard in as fast and tasteless a manner as I could. I improved more quickly than my guitar-playing pals since their left hands were struggling with speed and strength where mine wasn’t. In terms of my right hand, I never remember having problems, certainly not with using plectrums. I figured that if I had to learn something, I’d just get on with it and learn! 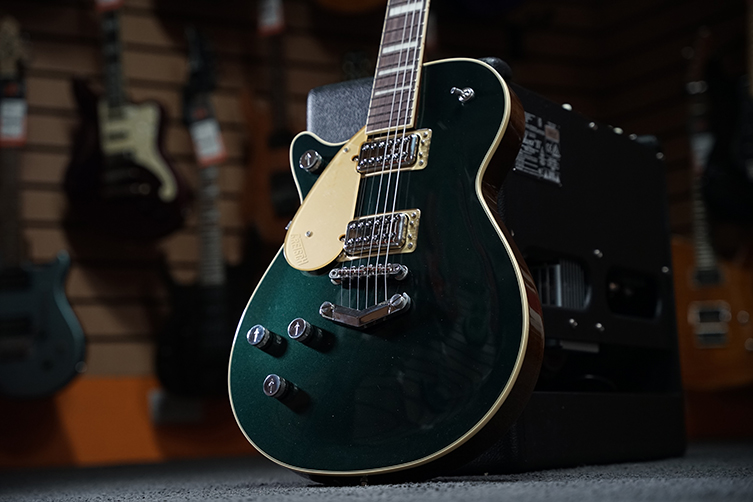 In the long term, what I’ve noticed is that certain relatively simple things have proven themselves to be difficult for me. The main one was finger-picking: it took a lot of patience and perseverance to be able to apply the standard ‘p-i-m-a’ techniques to my unruly right hand. I got there in the end, but my right-handed friends got there long before me, issuing puzzled looks in my direction as they heard my cack-handed arpeggios. I could slay them at a Satriani solo, but they could play Norwegian Wood without flubbing notes or missing them altogether like I did. My right hand lacked the dexterity and synchronisation required for such a relatively easy task, and it took (I should say, takes) an element of dedication to work past that.

It wasn’t even a case of learning to shred and forgetting the basics: I was a big fan of arpeggios, rhythms and riffs from the beginning: it just so happened that my left-handedness afforded me an aptitude for speed and expression that my right-handed contemporaries didn’t attain until later on.

More recently than this, I’ve attempted (on numerous occasions) to master some proper Flamenco techniques, and again, the non-dominant right hand is proving to be something of an issue. Right-handed players can confirm to me that Flamenco is tough, full-stop, so there’s an element of relief there, but I still think it’s a disadvantage being left-handed in this respect.

Neal has been playing since he was around ten. “My parents took me to a shop in town and the man put two black Stratocasters into my hands: identical except one was left-handed. I tried both and immediately preferred the lefty one. The right-handed one just didn’t feel right. So, we bought the left-handed one and I began to learn.”

This is actually the easiest way to determine which ‘handedness’ to use in guitar playing: handle both, and even if you can’t play a single note, one will appear more ‘correct’ to you. Again, it's like kicking a ball or picking up a pen: one way will immediately feel more correct and natural than the other. Just go with it! Why fight against nature? 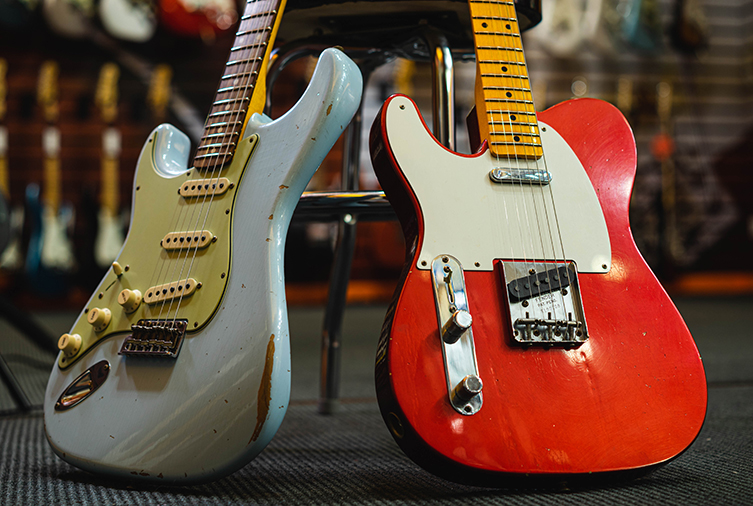 Neal had some interesting comments to make about the acquisition of guitars. Generally, he didn’t find too much to complain about in terms of availability of guitars, though he concedes that many southpaw players on online forums do get annoyed at the lack of choice.

“In the UK or the US things are fine, really. It’s more like, if you’re in India or Eastern Europe, it’s hard: there’s less choice”. He also added that, before the likes of guitarguitar brought in vast amounts of left-handed guitars, he would often order from the States and have the guitars shipped over.

Though Neal mentioned his opinion that a guitar is a tool before it’s anything else (implying that perhaps it’s the collectors and not the players who criticize the lack of lefty guitars...), he did say that he enjoyed the ‘hunt’:

“I can trawl online sites for a month, looking for a particular type of guitar to turn up, watching and waiting to jump on it as soon as it becomes available! It’s very satisfying. I bookmark ‘left-handed guitars’ on eBay and look every day, something that right-handed people probably don’t have to do”. 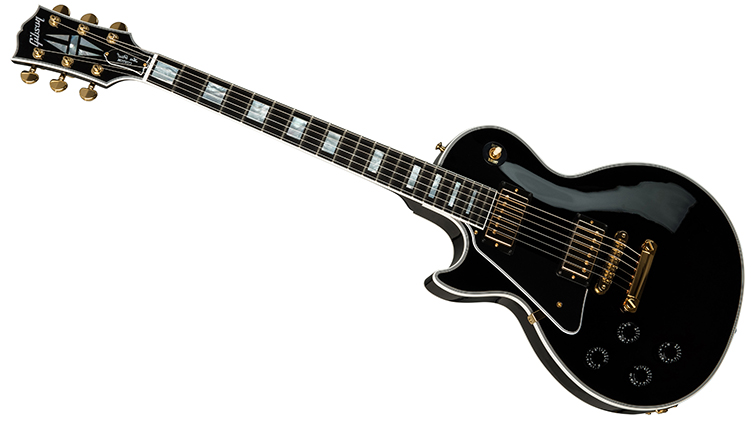 Some brands charge more for left-handed versions of their guitars. Neal is philosophical about this, citing two prominent examples:

“Fender charge the same price for their lefties, but they don’t offer anything like as much choice. Schecter, on the other hand, offer a huge range of left-handed guitars, but they charge more money for them. So it’s up to you: you either get the good price, or the good choice.”

Another interesting point Neal put across, based again on his interaction with lots of left-handed guitarists in online forums, is that lefty guitarists are far more likely to order custom-built instruments due to the comparative lack of choice out there. This is perhaps not so true today though, as you'll see when you browse some of the incredible high-end lefty guitars we currently have in stock!

A lot of the overarching thread to my chat with Neal boiled down to the basic notion of  ‘getting on with it’: from agreeing that left-handed guitars do look a little odd (“you get used to it”) to the notion of reading TAB and chords in a semi-backwards manner (“left-handed chord books are out there”), it’s very much ‘where there’s a will, there’s a way’.

That’s a great attitude to take. Basically, if you are a lefty, it’s no big deal.

Go With What Feels Good

We have always, and will continue to be, major supporters of our left-handed brethren. If you are thinking of beginning to learn guitar and are undecided on whether to play left-handed or not, please do come into one of our stores and ask for help. We want to help turn you into a happy, commited guitarist, but it’s neither heads nor tales to us which way around you play! We’ll be happy to help you figure that one out and then equip you for your life as a guitarist!

Lefties reading this: do either of these stories ring true with you? Whether you are a ‘closet’ lefty like me (and Fripp, Bowie, Corgan etc) or a ‘true’ lefty like Neal, Paul McCartney and Jimi Hendrix, hopefully some of our observations and experiences ring true with you too. We are all in this together, whichever way around we hold our beloved guitars. At guitarguitar, you’ll be welcome either way.