Who do you go to when you want some really outstandingly over-the-top effects?

After over 50 years, there’s still one company that consistently goes further ‘out there’ than all the rest.

You know it: it’s Electro-Harmonix.

Those crazy wizards in New York City, led by Mike Matthews, have been channelling all sorts of arcane imaginings and impossible sonics into their creations since the late 60s. Listing all the renowned players who’ve used EHX pedals on world famous songs is a pointless endeavour, since it’s harder to find any who haven’t! For the sake of illustration, we are talking about every significant guitarist from Hendrix to Cobain, Gilmour to Jack White and beyond. Who’s your favourite player? They’ve got at least one. Trust us.

So, we expect you’re already familiar with the likes of the Big Muff Pi and the POG, but Electro-Harmonix are constantly innovating and releasing new pedals. We love that, especially when a high percentage of pedal releases these days are re-tweakings of the same few overdrives and fuzzes from the past. These guys own the past and are taking us into the future!

So, we recently received a lovely new shipment of pedals from New York, where Electro-Harmonix pedals are all still built. Rummaging through a fresh EHX delivery is like Christmas morning, even when you (kind of) know what’s going to be in the box! This time, we took stock of a couple of brand-new effects which are blowing our minds. Can we talk to you about them?

It’s false to say that all Electro Harmonix pedals are mad, whacky things that will transform your tone and render it unrecognisable. Plenty of their pedals do the exact opposite, including offering some of the greatest overdrives (Soul Food), delays (Memory Man series) and Choruses (Small Clone) on the market. These pedals will enhance your tone and make you sound like a pro.

This pedal, however, is one of those other ones. 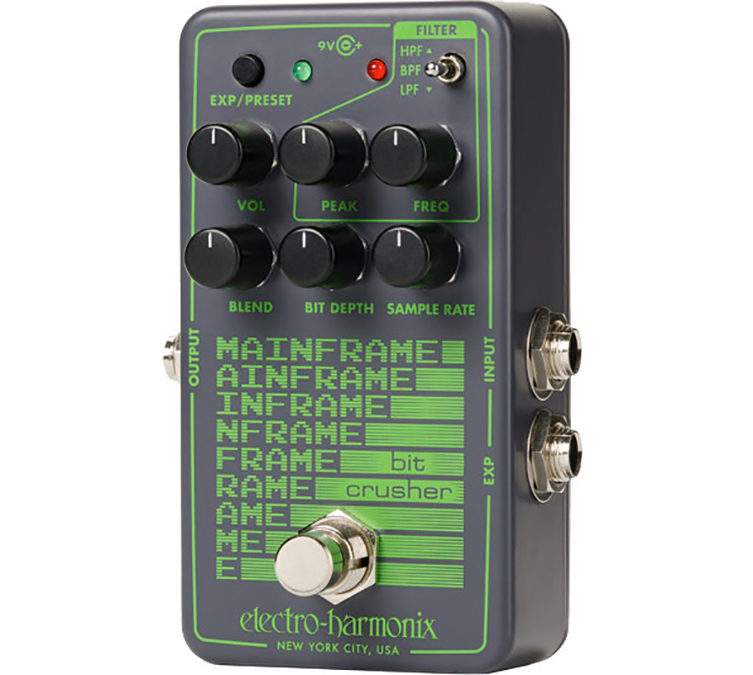 The EHX Mainframe Bit Crusher is designed to obliterate your signal and make it sound, by turns, like a buzzing wasp, an old dial-up modem (Google it, kids) and finally an 80s home computer. Sound appealing?

We thought so! If texture is your thing, you’ll find tons to love here. If atonal, belligerent leads are your bag, the Mainframe is a must! Bit Crushing involves reducing the complexity of digital information that makes up your initial signal, so your guitar tone gets more ragged, square, unpredictable and bizarre as you increase the settings. You are basically chewing up your sound and spitting it back out with all sorts of aberrant overtones, known as ‘artefacts’, which is a great way to express anything.

Describing the resulting tones is something of a loser’s game, given the very-specific-yet-very-unusual sound of offer, so here’s a video to let you hear it instead:

What did you think? We know, it’s awesome! So, you can attach an expression pedal in order to gain real time control of these artefacts, and also ‘fine tune’ them via secondary parameters (the knobs double up on what they can control) in order to get something that sits more in tune with your song. You may want that, we don’t know. There’s also a pretty comprehensive filter section on there for easily chopping out or accentuating certain frequencies. Just get busy twisting knobs and indulging in your inner Jonny Greenwood, that’s our advice!

The EHX Pitch Fork + gives you some next-level pitch shifting effects. It’s housed in a relatively compact chassis, with the option of expanding with expression pedals and more if you decide to get ambitious! The Pitch Fork + has two completely separate pitch shifting engines, and these can be used to together if desired. You get up to three octaves' worth of shifting in either direction (from whatever the note originally is as you play it) and 100 presets to play with, too. These can be written over etc, and you can also just plug in and go, like a regular pedal. It’s as simple or as in-depth an effect as you want it to be, really. 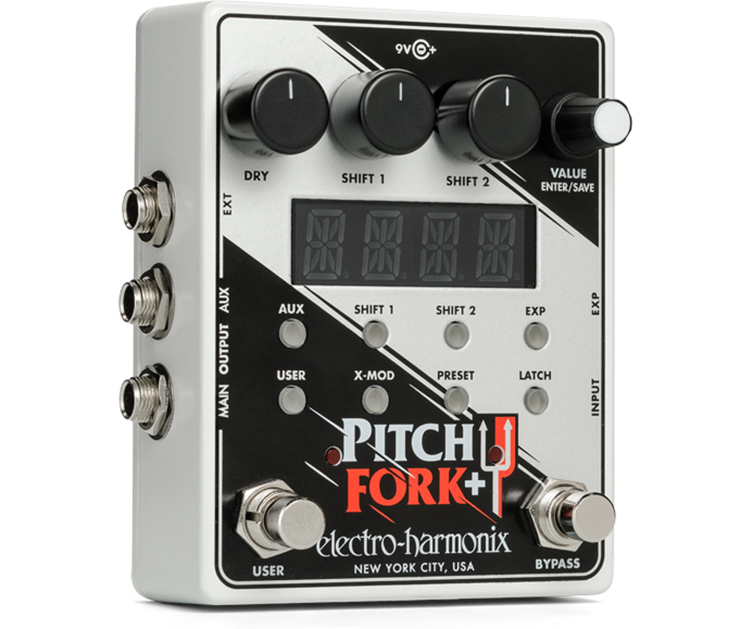 From Duane Eddy to Dimebag Darrell

Sonically, the Electro Harmonix Pitch Fork + lets your standard electric guitar turn into a twelve string, a twelve string with added low octave, a twangy baritone, and a bass. You can also dial in some lovely, deep Chorus tones via the Detune settings, kind of like what Chorus effects do anyway. On the other hand, the Pitch Fork + will also deliver - with an expression pedal attached - all of the screechy, swooping, Tom Morello/Matt Bellamy/Dimebag Darrell high-pitched craziness that you know and (presumably) love! Get creative and use the low voices to maybe combine a bit of both! It really is up to you: the pedal can handle all of the processing, and it tracks notes brilliantly.

For creative guitarists, this is a big ol’ treasure chest of fun. Check out the video below...

Those folks up in New York City ain’t lost none of that crazy magic! Did you like what you’ve read about and heard? If you do, we have a whole delivery of EHX pedals awaiting your now-undivided attention! In true Electro-Harmonix fashion, these new pedals are familiar to things we’ve seen, but travel significantly further out into the woods, so to speak. We always think of pedals like these as instruments in themselves, as they definitely take command over your sound and playing style. That’s what is so fun about them! You must surrender a little of your preconceptions and get into the vibe of creating. The rewards are huge.

These are fresh continents of sound to explore, friends, and these superb new boxes from across the water can be your primary devices in achieving sonic landscapes heard by nobody ever before! Endless sonic adventures await!

‘Fortune favours the bold’, as Virgil once said. He definitely had a few Electro-Harmonix pedals on his board, we reckon. Venture forth and enjoy.