This 25 watt head is the perfect gigging companion for those who want to unleash the signature sound of the Mesa/Boogie Dual Rectifier. With Multi-watt power settings switchable from 25 w to 10w on each channel, you can alter the headroom of the amp as you prefer along with the response characteristics.

As with its mighty big brother, the channels of this combo have switchable characters: clean can also be ‘pushed’ and the gain channel can be either vintage or modern. Each channel has entirely separate gain, EQ, master and reverb (on the back) controls so you do not have to compromise either channel. This is the simplest way to get that colossal Dual Rec firepower at your next gig. Of course, it’s not all about mega-gain with this head: the clean and pushed sounds are full of depth and expression, especially when you dial in a little long spring tube reverb. This is an excellent selection of sounds available from this tasty little head: match it to a quality 1x12 (or larger) cab for a portable master of tone.

With the Mesa/Boogie Recto-Verb Twenty-Five set to 10-watt operation, you get the cranked-tube-amp sound at lower volume levels. It feels pleasantly liquid yet responsive, with lush harmonics. In 25-watt mode, the Recto-Verb Twenty-Five packs all the punch, power, and clarity you'd expect from a modern Mesa amp. And thanks to Mesa/Boogie's patented Multi-Watt Channel Assignable Power Amp, you can set each channel to whatever wattage you prefer.

There's an incredibly sweet tube-driven spring reverb in the Recto-Verb Twenty-Five, and that's not even the best part. Each channel has its own reverb level, so you're not restricted to the same reverb setting for both channels.

Built in the USA to rock hard - and reliably

Mesa/Boogie has been hand-building some of the most sought after guitar gear in Petaluma, CA since the late '60s. Early fans of Mesa gear include Carlos Santana and Keith Richards, guitarists whose tones have been chased by countless musicians ever since. When you plug into the Recto-Verb Twenty-Five, you're tapping into decades of innovation. Especially if you're a regularly gigging musician, you'll appreciate the top-notch sound and construction you get in the Recto-Verb Twenty-Five.

Difficult to find anything built in USA or the UK; everything seems these days to be made in China, but not Mesa. One of the better amps, better than Fender, Vox and Marshall. 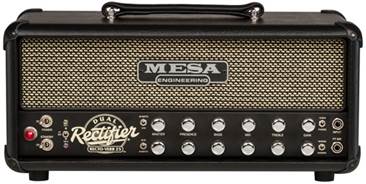 We'll get in touch when the Mesa Boogie Recto-Verb 25 Head is available.