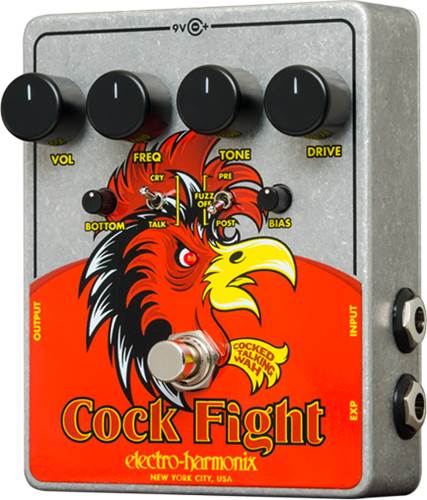 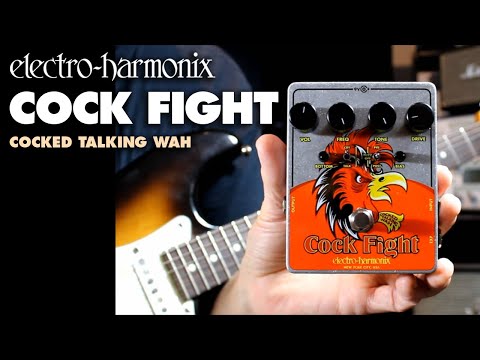 Electro-Harmonix expand their range of dubiously-named pedals with this Cock Fight wah pedal! It's not a usual wah though: this non-treadle pedal wah is designed to get you that half-closed (or cocked, to continue with the parlance) 'Money For Nothing' or 'Michael Schenker' tone that sounds so awesome.

But it doesn't end there! No, this is Electro-Harmonix! The Cock Fight also has a Fuzz circuit which can be placed before or after the wah to change its 'temper'. This can sound quite dramatic depending on how you set it! The fuzz is of the 'dying battery' variety and adds a real edge to your sound and makes the wah sound more pronounced.

The Cock Fight can accept an expression pedal to turn the wah into a traditional foot-controller wah. There is also a 'Talking' wah mode too which moves the sound into a quasi-human, vocal-like vowel dimension.

This is most definitely not a run-of-the-mill wah pedal!

- Great cocked wah and talking pedal sounds
- Like getting three pedals in one: crying wah + talking wah (with adjustable frequency) plus a classic fuzz
- Use with or w/out the fuzz. Place the fuzz before the filter for a vintage vibe or after for a more modern sound
- Adjustable bias control takes the fuzz from "normal" to a classic "dying battery" sound
- EXP input so you can sweep the wah and talking pedal with an expression pedal
- Includes an EHX 9.6DC-200 PSU, also works with 9V battery
- Dimensions in inches: 4.0 (w) x 4.75 (l) x 2.25 (h)
- Dimensions in mm: 102 (w) x 121 (l) x 89 (h)

We'll get in touch when the Electro Harmonix Cock Fight Talking Wah is available.