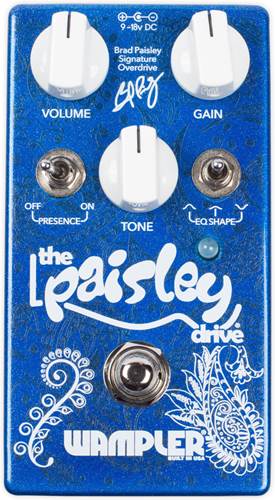 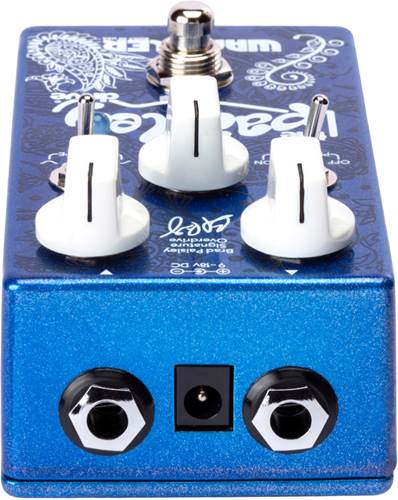 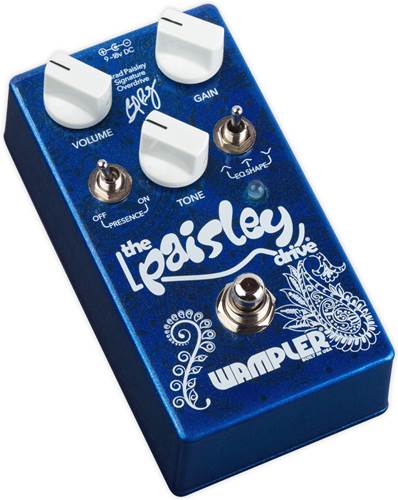 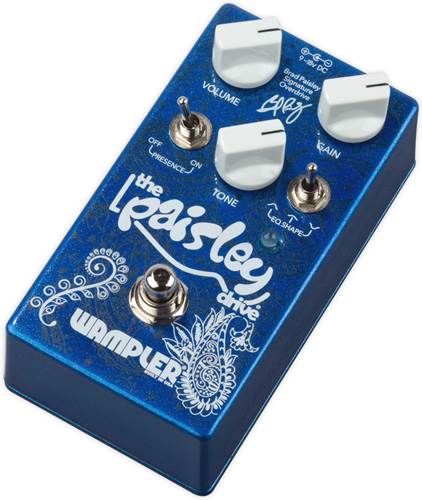 After using Wampler pedals for some time, the sheriff of country guitar Brad Paisley laid out a simple brief to Brian Wampler: ‘Make something that has everything, in a pedal format, but do not make it sound like a pedal!’

Challenge accepted and after some time in the workshop the Wampler Paisley Overdrive rode into town!

Featuring a simple control layout, a presence and mid contour switch the simple yet effective set up pretty much covers everything you’d need under the country rock umbrella and beyond!

From warm overdrive with extra beef to searing gain but keeping intact the sweet tonality Wampler is famous for, they’ve truly created an overdrive that covers a lot of basses and is no way exclusive for those in cowboy boots. The Paisley drive would sound great in most genres!

Brad Paisley himself took a few prototypes of the Paisley drive on the road for his 2010 H20 world tour and worked closely with Wampler to iron out any issues in the way of creating his perfect pedal.

We've got to say we are suckers for anything with Paisley print on it and this pedal is no exception. You'll be attracted to this pedal for it's looks but stay for the fantastic variety of sounds on board!

After a few years of using our pedals (Ego, Underdog and Faux Analog Echo) Brad's new tech, Chad, mentioned to Brian that Brad wasn't 100% content with his tone and maybe we should all work together to make the perfect overdrive for Brad to record and tour with.
Paisley's requirements were quite "simple"… it needs to be clean but get crunchy with some "beef" to it. It needs to have a fluid tone when soloing. It needs to add a little hair to the tone but then but then has to be able to give flat out ball busting gain, oh… but please do not wreck the tonality. It needs to have everything, in a pedal format, but do not make it sound like a pedal!
Over a period of months, Brian made some circuits and sent them off, there were a couple of "tweaks" here and there to be made and then finally, when official "prototype #2.0" landed, it went straight into the live rack and out on the 2010 "Brad Paisley: H20" world tour.
The truly great thing about this pedal is that it's not only Telecaster style guitars that it works so well with, it brings the best out of your Strat or anything you may have loaded with humbuckers. You no longer need to have individual pedals for your guitars; the Paisley Drive will make each one sing.
The built in tonal controls, the presence and mid contour switches (giving three completely different EQ styles – warm mids, neutral, and a more mid scooped character, will make this pedal one of the most versatile and complete overdrive pedal you have ever owned.
Brad Paisley:
"…we actually recorded this (pedal) in the studio, you know, trying it out. I turned up a Trainwreck Amp that I've got and compared the sound of the distortion and it was very, very similar. And that's a very good test because any time a pedal can mimic a great overdriven amp then you're on to something…"

We'll get in touch when the Wampler Paisley Drive Overdrive Pedal is available.