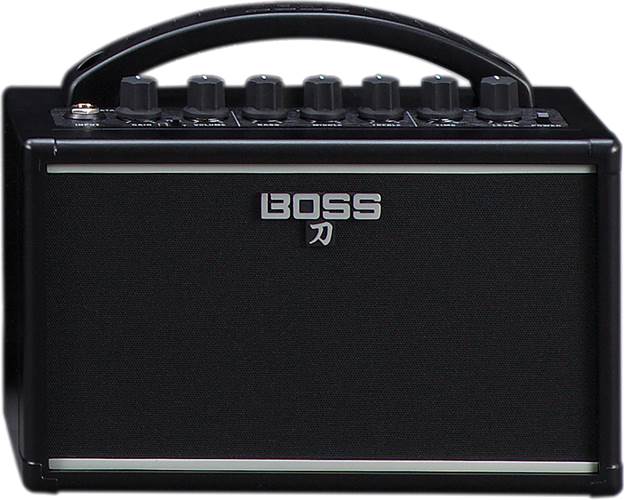 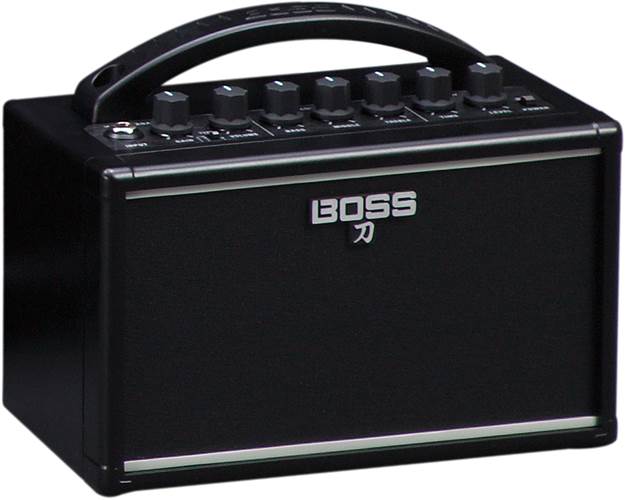 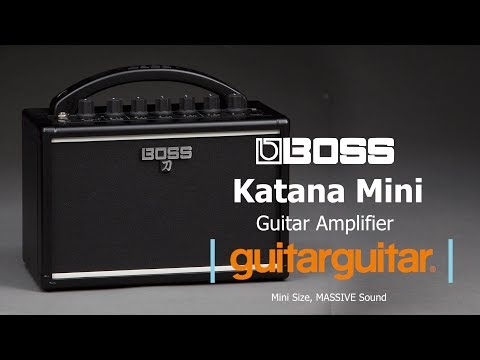 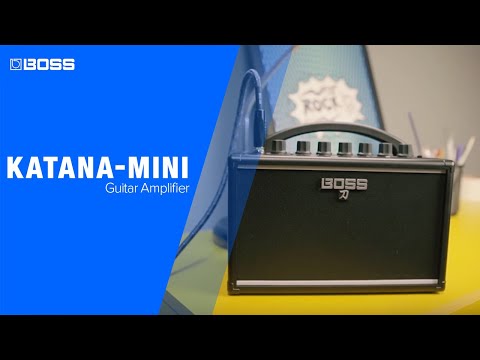 In this age of omnipresent small amplifiers, the market for a truly portable, battery powered amp is rather crowded. Competition is stiff from all corners: can BOSS, long-established stompbox goliaths, enter the fray with an amp that will do some damage?

Well, yes, frankly. These small amplifiers are continually surprising our ears here at guitarguitar: sitting in the house and plugging into a lunchbox sized amp is no longer a compromise in terms of tone and BOSS’s Katana mini proves this with a ‘Brown’ sound that is pretty spectacular given the circumstances! We are taking genuine high gain filth with no hint of fizz or raspiness: this tone is balanced and fully formed, even coming out of this amp’s tiny 4” speaker.

Three channels are present here: the aforementioned ‘Brown’ sound, notably designed and named after the famous distorted tone of a certain game-changing Dutch guitarist whose band is named after him and his drummer brother…

There is also an impressive clean sound and a rich crunch tone on board for those strange moments when you don’t want massive amounts of gain on your sound. A 3 band EQ is included, as is a nicely warm sounding delay circuit with its own Time and Level control knobs.

Run the Katana Mini on batteries and mains, it has both options and includes batteries in the box.

With such great sounds available so easily in a package that weighs nothing and takes up no space, it’s a complete no-brainer to choose the Katana Mini for your mini-amp rocking!

Good value for the money - could not believe that the big sound i was hearing was coming from this little box! Needed a very small / portable practice amp that could run on batteries and this fitted the bill. I also considered the Roland Micro Cube but it was twice the price of the Katana.The Katana Mini is outstanding value for the money but if you can afford it - the Roland Micro Cube, having previously owned one, is the better amp in my opinion.

Brilliant for what I wanted. I have just started learning.

I only play at home for my own amusement, and since I sold my last "proper" guitar amp a number of years ago, had been using a Digitech multi effects pedal fed into my PC as a substitute. I'd been thinking about buying a small amp for a few years and at various times had considered buying a Blackstar Fly 3, Roland Micro Cube or a Yamaha THR5 among others. I decided against the Fly 3 because it only features a single tone control, and rejected the other two because I didn't feel the need for a range of distracting built in effects or a tuner. The Boss Katana Mini in contrast features 3 band eq which in combination with the 3 channel options, will give you pretty much whatever sound you want - personally, I found the clean channel simply too "clean" and the brown channel too "in your face" for my tastes, so will stick to the crunch channel. The built in delay is fairly basic, allowing you to adjust both time and level - I've seen it claimed that if you turn both up all the way, you get a reverb effect - though I remain unconvinced. My recommendation to anyone buying one of these (and I do!), is that you play about with it until you get the sound that's right for you (and there's a lot to choose from), and then leave well alone and just play! Build quality seems excellent, but as to reliability, only time will tell. And the same goes for battery life.

You can't go arong for the money. A great littel amp that is ideal for practice but I got it for home studio recording use. Highly recommended.

For the money this practice amp is fantastic value.

I live on a narrowboat so this amp gets me by.

Does the job for me excellent.

For such a small box it has amazing sounds at low practice volumes. Value for money is immense. Its also tiny and extremely portable.

I can?t believe how good the sound is from this little thing, it?s a go anywhere size and perfect for a bit of practice, oh that sound ?

Daughter loves this and the sound is really good for the size of it.

Great little amp for the price ?.

Can't believe how good it sounds. Must have f*** off all my neighbours - for a 7 watt amp - oh man! - technology has moved n since I started playing the guitar. Embrace It!

Awesome mini amp. Great sound and plenty of volume for bedroom practice. May even do a very small gig. Batteries last for ages, though the official power supply is expensive and not included.

We'll get in touch when the BOSS Katana Mini is available.