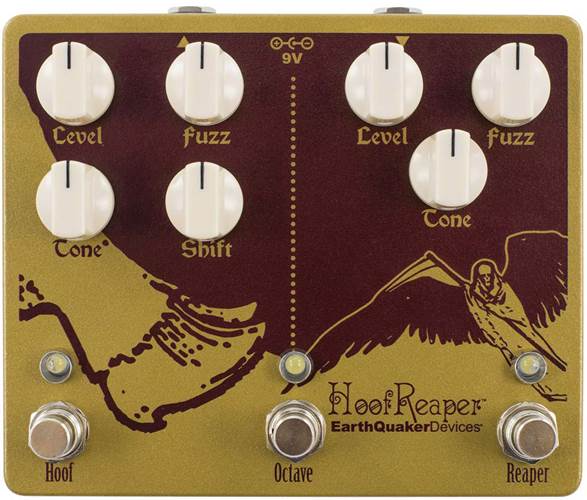 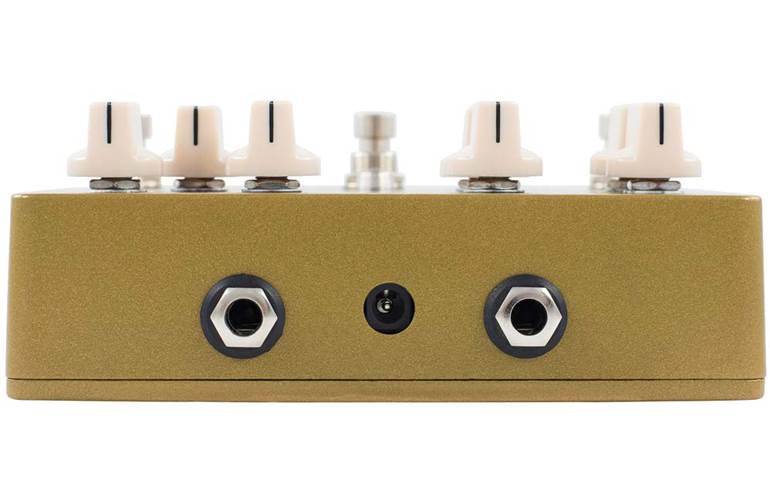 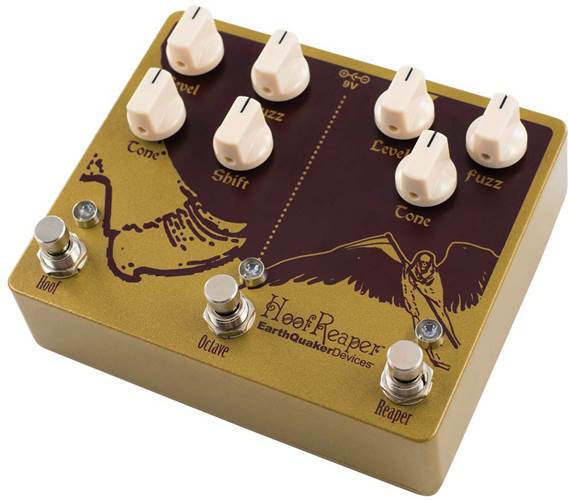 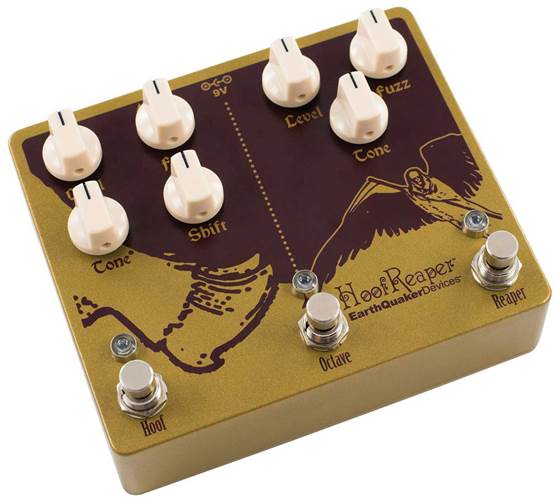 The Hoof Reaper V2 features EarthQuaker Devices’ popular Hoof and Tone Reaper fuzz pedals in one handy enclosure with the added bonus of the old school analog octave up tones from their Tentacle Octave. Capable of creating everything from subtle octave-up overtones through crushing octave squalls that simulate exploding stacks of amps. Each effect can be used individually as well as in series but the order of effects is preset for optimum performance.

The Hoof, EarthQuaker Devices’ flagship fuzz, is a no-fuss, easy to use device capable of sounds from warm, gritty overdrive to a huge sustaining fuzz. It’s a germanium/silicon hybrid muff style fuzz (based on the old green russian muff) with massive amounts of volume on tap and smooth amp-like sustain. It has a tighter, cleaner sound than most muff’s which makes it more cutting and discernible in a band setting.

The shift control is the key to the Hoof’s character, it alters the frequency response of the tone control. Clockwise scoops the mids and counterclockwise enhances the mids. The Hoof has become the go-to fuzz for many well known fuzz connoisseurs. The Tone Reaper is a vintage style fuzz device based on the “3 knob” bender. It’s a silicon/germanium hybrid capable of producing a wide range of tones from every bender era with careful tweaking of the tone and fuzz controls. From thin and spitty to thick growling sustain, its all here.

The analog octave up in the original Hoof Reaper from 2010 became so popular that EarthQuaker Devices decided to release it as a standalone pedal now known as the Tentacle. This classic octave effect pairs perfectly with the two fuzz circuits, letting you unleash everything from classic Hendrix-inspired tones to all-out screaming and squelching doomsday device sounds.  The octave in the Hoof Reaper V2 has now been upgraded with EarthQuaker’s new flexi-switch. This lets you use it in classic latching mode or in the new momentary mode, seeing you jump in and out of octaved riffs and solos like nobody’s business!

Oh, and remember, since its an analog octave the effect will become much more pronounced when using your neck pickup and playing above the 12th fret.  Rock on! 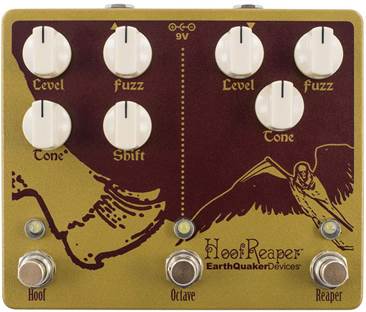 We'll get in touch when the EarthQuaker Devices Hoof Reaper V2 Fuzz is available.