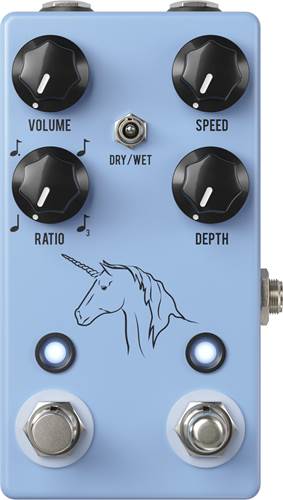 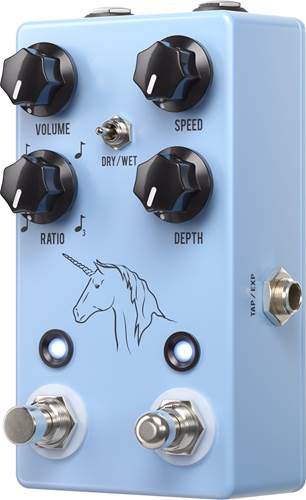 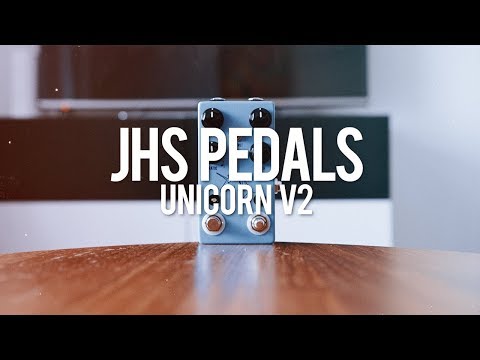 The Unicorn V2 by JHS taps into the classic analog photocell univibe and vibrato effects from the 60s. Powering it on instantly transports you back in time to give you the luscious swirling tone loved by Pink Floyd, Jimi Hendrix and many other classic acts. However! It wouldn't be a true unicorn without something extra special to offer, this is the world's first bulb-driven photocell modulator with a tap tempo, making this one of the most useable vibes around!

The univibe sound has been used over many genres, including prog, jazz, goth and classic rock. It instantly adds a retro flavour to your tone, so would suit those looking to add a bit of vintage vibe or psychedelia to their music, but its dreamy sound would also work great for shoegaze, chillwave and other alt-rock subgenres.

The Unicorn is the only all analog bulb-driven photocell modulator pedal to feature tap tempo. This unique feature give you acute control over the fluttering effect so it will perfectly pulse in time with your music. The tempo can also be controlled from an external source, for example, a tempo sync that's connected to your other time based pedals for uniform consistency across your board.

The pedal can also be used with an external expression pedal to change the effects rate in real time, giving a huge range of dreamy potential to your performances.

SOUNDS AS GOOD AS YOU REMEMBER

The Unicorn is bursting with all the lush and washy pulsations that changed what the electric guitar could sound like in the 1960s. And this is no digital emulation. The Unicorn sports the real-deal, analog photocell topology of the original units.

There are other analog vibe pedals and there are pedals with tap-tempo control, but - if we’re allowed to gloat for a second - the JHS Unicorn is the first to put ‘em together. Add optional external speed control and a ratio knob that determines the rhythmic subdivisions or as we like to say, how much fairy dust enters into the flux capacitor of the Unicorn - and you have one of the most versatile vibe pedals on the market.

But wait, there’s more! One of the things that makes the vintage Shin-ei* Uni-Vibes* so desirable is your ability to control the effect’s rate in real time with an external expression pedal. How could we not include that!? And to go one step further, you can slave the pedal to other tap-controlled pedals for rhythmic consistency across all your effects.

COULDN’T BE EASIER TO USE

One of the things we’re most proud of with the Unicorn Uni-vibe* Photocell Modulator is how easy it is to dial up the exact pulse of a mystical Unicorn running across a field of 4-leaf clovers… but only if you dare.

The original Unicorn sounds great and works perfectly, so we didn't change a thing about it other than: its now half the size, and its a lower price point!

We'll get in touch when the JHS Pedals Unicorn V2 Vibrato is available.