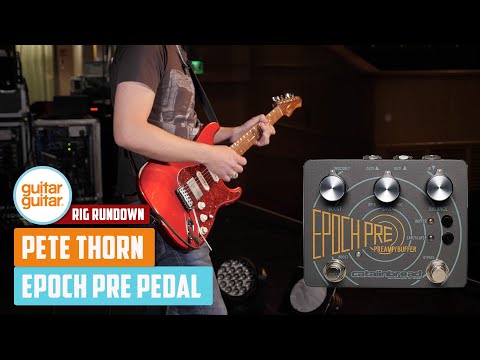 The Epoch Pre was modeled after the exact preamp circuit from the original EP-3, from the 22v power supply to the JFET preamp, to the circuit loading contributed by the echo function. Not only does it provide boost it acts like a mastering plug-in on the master fader - making your whole pedalboard sounds bigger, lusher, wider, the Epoch Pre can bundle all the frequencies without squishing them like a compressor!

This is essentially the volume control, but much more nuanced than that. It is the wet/ dry mixer circuit from the Echoplex/Belle Deluxe but of course, there is no wet signal! We used the fancier mixer circuit rather than a standard volume control because it contributes to the subtle tone-shaping that the Echoplex is known for. From min to around noon, it acts much like a volume control. But from noon to max, the volume doesn’t really increase. Instead, what you’ll hear is that the tone shifts in subtle ways. The thickest tone will be from around 1:00 to 3:00. As the Balance knob is maxed, the low end gets tighter. If you are plugging a guitar straight into the Pre, these tone shifts may seem very subtle. But as you add more pedals in front of the Pre, the effect becomes more pronounced.

At its core BIAS controls the gain of the pedal. As you turn it, it will crackle. We assure you, this is okay! Set to minimum, the pedal will be around unity gain and will get the general response of the EP-3. (Remember, the Echoplex was not designed to boost signal. Echoplex designers were just trying to come up with a unity driver and not effect the sound. But the preamp did change the sound and everybody loved it for what it did). Turn up the Bias for more gain. The Epoch Pre is super high headroom and won’t distort, even at high Bias settings. What it will do is make everything sound bigger.

This switch allows for an instantaneous preset boost, as determined by where the Boost knob is set. The Boost function is part of the preamp; if you have the pedal bypassed, the Boost does nothing. This boost function was voiced to make the signal bigger, louder, and wider. The Naga Viper, for example, in contrast makes the sound more focused.

The EP-3 Echoplex went through a few revisions during its production life. The first 400 units had a different preamp voicing and has now become one of those holy grail legend type things.

The Early voicing had a tighter bass and more upper midrange boost which made it perfect to enhance the big cranked up Marshalls everyone was playing through. As you know, if you crank up a tube amp it gets thicker and you can lose definition and cutthrough power. Think of the Van Halen sound (although it is not known if he used early or later models).

The Later voicing has a bigger, looser bass and more of a flat frequency response. It’s overall vibe is thick and creamy. The Early/Later button on the Epoch Pre reconfigures the preamp to both of those specs in exacting detail, down to the type of input/output/bypass capacitors.

PURPOSE OF THE EPOCH PRE?

While you could use it anyway you want to, our design intention is for the Epoch Pre to be the very last pedal in the chain. Not only does it provide boost, it acts like a mastering plug-in on the master fader - your whole pedalboard sounds bigger, lusher, wider. The Epoch Pre bundles all the frequencies without squishing them like a compressor. For moments where you’re looking for your part to standout in the mix, engage the Boost! Remember, the EP-3 was a three-pronged device, not only was it a delay but also a sonic enhancer and live performance tool. The design of the Epoch Pre was intended to feature its capabilities as a sonic enhancer. Folks with massive pedalboards will benefit from having this at the end of the chain.

We'll get in touch when the Catalinbread Epoch Pre Pedal is available.