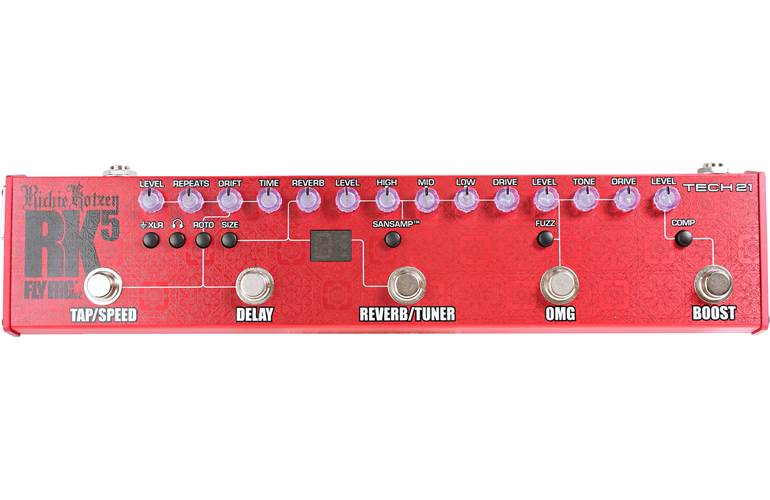 The Richie Kotzen RK5 Signature Fly Rig was developed in close collaboration with Richie, whose input was invaluable. Meticulous about every facet of his playing, singing, songwriting and tone, Richie’s attention to the details of his RK5 was nothing less.

Since the debut of the original RK5 in 2014, Richie’s needs have changed, both on and off the road. Therefore, we jointly developed a version 2, to incorporate some new features and follow the same form factor as later Fly Rigs, such as the Bass and Acoustic.

The RK5 v2 retains the same delay with tap tempo, a powerful boost, and Richie’s Signature OMG overdrive. New features include an independent reverb with choice of room size, a rotary speaker mode, compression, fuzz, a tuner, headphone capability and an XLR Output.

Another difference is an on/off button for the SansAmp section. Richie previously would use his RK5 both with and without the SansAmp engaged. Currently, it’s either on or off during stage shows, so he no longer needs a dedicated footswitch. When Richie’s on tour with ever-changing backlines, he’s always able to get his tone, and at lower volume. On Richie’s latest releases, The Damned and Riot, all the guitars were recorded direct.

If you’ve seen Richie on tour in recent years (and if you haven’t, you simply must), you may have noticed he uses two RK5s. He has continued this practice with Version 2 so he can quickly switch between different settings of each of the effects.

Richie is actively involved and responsive in the entire design process. Having both a working and personal relationship with Richie, is a tremendous highlight in our history.

BOOST + COMPRESSION
BOOST is an independent pre-Boost for solos, up to approx 12dB.
COMP Switch engages old school, all-analog, FET-based technology from the ‘50s and ‘60s, which is inherently warmer, more transparent and more musical than other methods of compression.

OMG OVERDRIVE + FUZZ
OMG is based upon the Richie Kotzen Signature OMG pedal, which provides a wide range of overdrive, from clean to aggressive. You can add personality to a clean amp or use it for extra punch with a dirty amp tone. Controls include Drive for the overall amount of gain and overdrive, and Tone with specialized voicing for adjusting the high-end and mid-range.

FUZZ Switch changes the character and attack of the overdrive to a fuzz-style tone, making it thicker and woolier.

SANSAMP
The all-analog SansAmp technology enables the RK5 to run directly into mixers of recording desks and PA systems, as well as augment your existing amplifier set-up. It can also be used to record directly and enhance previously recorded tracks.

The SansAmp section of the RK5 includes 3-band active EQ, and Level and Drive controls. It focuses on clean tones within the tube amplifier sound spectrum. To dirty things up, you have the flexibility of using the Drive control, the Boost function, or you can add overdrive from the OMG section. Or all three. Each method achieves different tones.

Chromatic Tuner is operable via the REVERB/TUNER footswitch. You simply hold the footswitch down to engage the Tuner, which simultaneously mutes the signal path.

DELAY + ROTO WITH TAP TEMPO
DELAY is voiced for the sounds of a vintage tape echo. It features Time and Repeats controls and dedicated Tap Tempo footswitch. There’s also a Drift control which adds a random, unpredictable element to the modulation in keeping with its vintage roots.

ROTO changes the Delay function into a rotating speaker effect. Tap Tempo then controls the speed. Just like the real thing, it will ramp up from slow to fast to gradually reach a new speed. Drift then controls the distance of the virtual mic to the rotating speaker. At maximum, it adds a tremolo-like effect by modulating the volume in sync with the tonal modulation.

Absolutely killer tones,all I use now,my pedal board is now redundant

We'll get in touch when the Tech 21 Fly Rig 5 RK Kotzen Model (V2) is available.