Fender’s Offset creations are more celebrated now than ever before.

Over the course of Fender’s 70+ years of history, it’s fair to say that the Stratocaster and the Telecaster are by far their most popular guitars. Decade in, decade out, people are always playing those models, and that hardly seems like it’s going to change much! However, the current ubiquity of what are collectively called Fender’s Offset models, is something that has steadily increased since probably the late 80s, growing in both visibility and appreciation to where they are now, which is almost neck and neck with the Strat and Tele in terms of popularity.

Fitting in with a certain sensibility of player, the offset guitars – made up of models such as the Jazzmaster, Duo Sonic, Jaguar and Mustang – are statements about the personality playing them as much as anything.

Indeed, these particular guitar designs have always had the stamp of approval from the counterculture, from artists and performers who wanted to distance themselves from anything overtly mainstream. Because of championing by indie noisemakers such as My Bloody Valentine and Sonic Youth (who bought them because, at the time, they were out of fashion and thus cheaply bought compared with Strats and Teles), these offsets have become the choice for guitarists who consider themselves somewhat iconoclastic.

These types of players are generally as interested in texture and atmosphere as they are with traditional parts. The relatively idiosyncratic nature of Fender’s offset guitars tends to work better in a context that’s some way away from overtly technical styles, and this attracts players who want to get away from typical ‘guitar hero’ paradigms. Some players feel an invasion of sorts when they play a Stratocaster, as if the weight of Hendrix/Malmsteen/Gilmour/Beck etc weights down on them from above! Offset guitars have no such associations and the feeling can be very freeing. 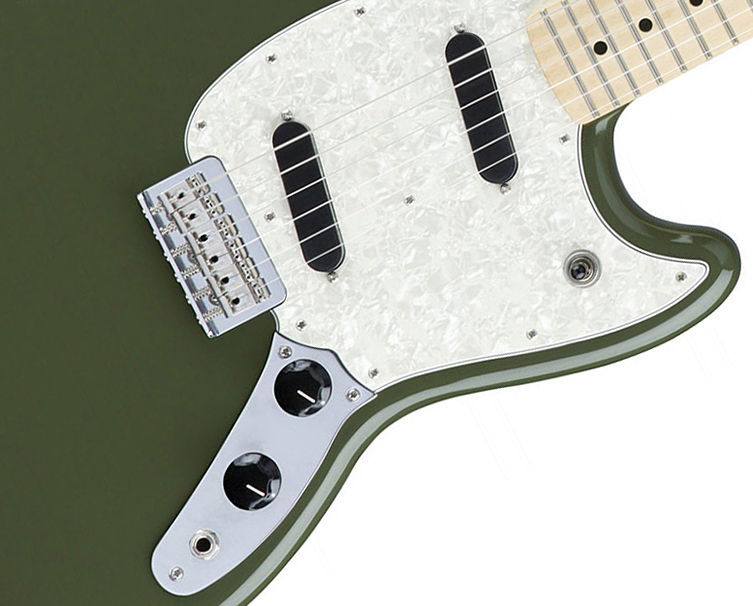 Much of this is scene-led, to be honest. The fact is, you can play Metal perfectly well on a Jazzmaster, just as you can play Indie songs on a Mayones if you want, but somehow it doesn’t seem ‘right’ to many of us. We all fall under the spell of fashion, context and ‘vibe’. Thus, the Offset models (they are called that because their bodies have asymmetrical ‘waists’) rate highly with players who belong to what we’d term the ‘alternative’ fraternity. They score big with singer-songwriters too, plus experiemtnal players who want to make use of the unusual circuitry (Jazzmaster/Jaguar) and unorthodox scale lengths (Jaguar/Mustang/Duo-Sonic) that these guitars have to offer.

As a major Fender dealer, we stock large numbers of offset guitars. This blog today aims to highlight a few select models that we like and want to show you. There are more, for sure, but these few selections will hopefully sketch out an overview of what out there in Fenderland, away from the Strats and Teles you know so well.

The Duo-Sonic was, like a few other Offset models, originally designed as a student model. As such, it has a short, 24” scale length and a very straightforward layout. You find two single coil pickups, a three-way toggle switch and simple volume and tone controls. This is about as stripped -down as a two pickup guitar gets!

For rebellious, chord-thrashing styles, the Duo-Sonic is a satisfying and exciting guitar. Fender have recently released these as part of their Offset collection, which sort of goes alongside the Player Series. You can find a host of great finishes, from tasteful White to OTT Orange!

Another model is available with a bridge humbucker, which adds a grungey flavour to proceedings. This model switches things up with a Pau Ferro fingerboard and some gloriously surf-centric finishes!

The Mustang is a similar model to the Duo-Sonic: they share similar general outline, 24” scale length and twin single coil pickup configuration. The Mustang adds a slightly different headstock, a metal control panel (and thus different pickguard) and other relatively superficial similarities.

They do differ, though! Check out the underside of the body’s curves, where the guitar would meet your lap is you sit to play. The Duo-Sonic definitely sits closer to you than the Mustang, changing the feel completely. It’s subtle, but the Mustang feels more ‘grown up’ to us.

Fender have also released some Mustang guitars in the Offset range. One model is available with the black-covered single coils, as shown here. This is arguably the more iconic style, with lots of Alternative Rock authenticity to play on. One thing we noticed, which we definitely approve of, is that Fender have done away with the historic slider switches that sat right above the pickups, right where we’d hit them with our hands every time we played! These reissues have binned that entire concept, and to that, we say: adios!

The other one has been equipped with P90 pickups, which alters the look and brings an altogether bigger sound. For players who want a guitar than can capably handle the loud/quiet dynamics than lots of alternative genres require, this model may well be the one to go for. P90 pickups, though still single coils, have an altogether chunkier sound, but still retain quickness and sparkle like regular single coils. Try both and see which you prefer!

Part of the appeal about Fender in general is how cool they look after they’ve been dinged up in battle. The scratches and marks accrued form decades of gigging increase the workmanlike nature of these guitars in a way that doesn’t always work on other brands.

These Jazzmasters here have been given the ‘Road Worn’ treatment, which is Fender’s term for any relic finishes that are done to non-Custom Shop guitars. We think they looks great, partly because the relicing isn’t too heavy-handed, and because they guitars have nitrocellulose finishes, which really does make a difference to the finished result of the bashing up process. 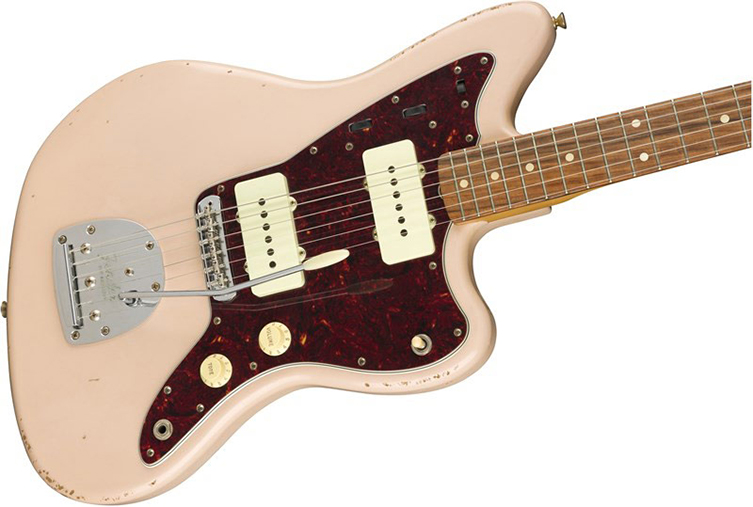 Jazzmasters are probably the most popular of all offset guitars. Their full 25.5” scale length makes them instantly familiar to plyers used to other electrics, whilst the rhythm/lead double circuit on a Jazzmaster isn’t nearly as confusing as the corresponding one on the Jaguar!

The Roadworn 60s Jazzmaster has all of the correct vintage appointments, from the proper circuitry, to the long trem arm and metal plate, to a vintage 7.25” radius fingerboard. This guitar is designed to give you the antithesis of a contemporary ‘performance’ playing experience, and it’s very refreshing and enjoyable in its own right. If you like Jazzmasters, these particular ones are going to make you squirm with delight!

There are already, as we’ve noted, an ever-growing army of fans for this particular style of Fender. For those who haven’t yet sampled any offset charms, he above instruments above may serve as a good entry point. You may find new avenues in your playing, just by trying something you know well to look at but maybe haven’t spent quality time with. We recommend experimenting and seeing what happens with your own playing experience.