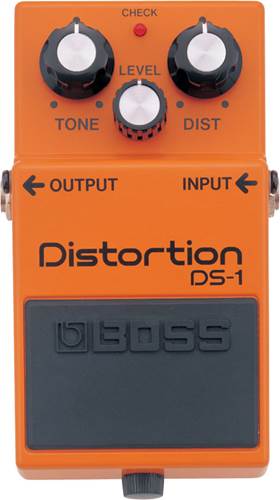 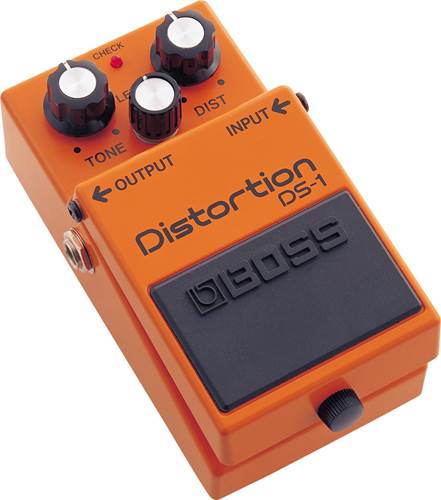 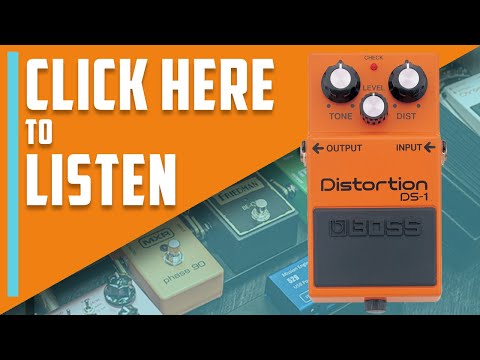 Without doubt BOSS's most popular compact effect, the DS-1 has been the One Pedal To Rule Them All since it's inception in 1978. From it's distinctive orange box form to it's abrasive clipping and gain structure, the DS-1 is an undisputed classic.

With just three simple controls - Tone, Level and Distortion - you can dial up a multitude of dirty sounds from tight and grainy right through to smooth sizzle with a heap of sustain. It's also one of the most affordable BOSS pedals on the market and with that you still get all of the build quality and reliability that millions of players have come to expect from BOSS. Legendary!

The classic DS-1 Distortion pedal provides a harder distortion effect for guitar and keyboard sounds. Instead of toneless, fuzzy distortion, the DS-1 faithfully reproduces all the subtle nuances of playing dynamics--at any volume.

Not used it much as of yet, but from the little I've used it so far it seems to work exactly as I thought it would when I bought it - really satisfying sounds, especially when taking account of the purchase price.

Just the sound I was after, at a great price

The iconic sound of the DS-1 is perfect for my style of play, and I wouldn?t have gotten it unless the good staff at GuitarGuitar glasgow had recommended it, thanks guys!

Does exactly what it says on box

Good quality goods that I know will serve me well in the future.

Great sound and easy to use.

Great sound and easy to use.

Boss always delivers on quality and tone regardless...this pedal is the basic distortion model and does what it says on the tin. Doesn't suck tone or signal loss.

Quality service all round.

Really good, solid for the price

It works as expected and hasnt yet failed me, i am thouroughly enjoying this product

Service and advice was awesome, thanks guys

I will contact them personally for their fast efficient service

Exactly as I expected.

The boss pedal was a gift for my grandson ,he described the item and company to order the boss pedal from he is very happy and rates the item very GOOD as he is very keen on his Guitar playing.

Does what it says on the tin.

We'll get in touch when the BOSS DS-1 Distortion is available.