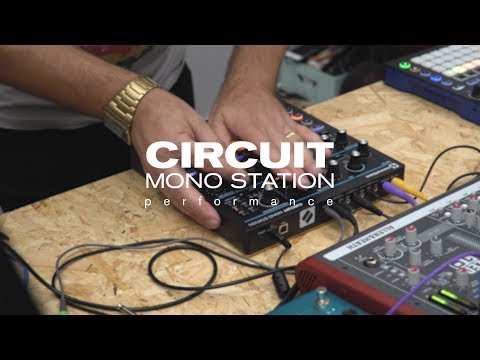 Novation's Circuit Mono Station expands on the original portable groovebox premise of the original but this time the emphasis is on monophonic and paraphonic synthesis.

Think about this little box of tricks as having 3 sequencers, each controlling one of two oscillators and one for modulation. There's a degree on real time control with knobs and sliders for cutoff, ADSR, oscillators and distortion as well as the Circuit-style grid for sequencing. It's a powerful beast and it really benefits from the real-time control: these really open up the expressiveness and fun of just blasting some noises!

There are 3 modes of distortion on here to punch up your sound and hairy it up a bit! A plethora of CV/gate ins and outs provide you with a wide platform for connectivity. Make this little box a part of your studio or live setup and enjoy the power, squelch and finesse of the Circuit Mono Station.

Circuit Mono Station v1.2 enables you to use the sequencer and synth as a sound design tool, integrate more tightly with modular gear, make widely evolving musical phrases, and add expression to sequences. Using Patch Flip, create unique sequences with different presets and automation per step, or turn Circuit Mono Station into a fully-analogue drum synthesiser. You can also now programme notes into the Mod Seq page to independently control your modular and CV gear with new pitch and gate control via the CV/GATE output.

You can now programme notes into the Mod Seq page to independently control your modular and CV gear with new pitch and gate control via the CV/GATE output.

The Circuit Mono Station LFOs have been upgraded to allow you to decouple synced LFOs from key sync. This means sequences can benefit from longer LFOs staying in sync across several notes, perfect for making widely evolving musical phrases. LFO Clock Sync can also now be controlled independently.

The envelope has been upgraded and you can now choose to have legato or retriggered envelopes. This choice gives an enormous amount of extra expression in your Circuit Mono Station sequences.

Circuit Mono Station is a next-generation sequenced monosynth that originates from the Bass Station II, with three sequencer tracks that benefit from the 32 velocity-sensitive RGB pads found on Circuit. The synth has two oscillators, three distortion modes, plus one multi-mode filter that can be high-pass, low-pass or band-pass.

With Circuit Mono Station, the sync and tuning parameters of its two oscillators can be individually controlled. It also offers four waveshapes (sawtooth, triangle, square and sample + hold), a sub-oscillator, ring modulation and noise generation. Users can get the frequency band they want by applying high-pass, low-pass and band-pass filters with slopes of 12dB and 24dB. In addition, Circuit Mono Station introduces a powerful overdrive.

Both monophonic and paraphonic modes are available, with each oscillator controlled by its own sequencer. There are three sequencer tracks: two oscillator sequencers and one modulation sequencer. Users can alter gate length, switch patterns instantly, choose sync rate and mutate patterns.

Up to 64 patches can be loaded and saved on the device, right at the user's fingertips. Circuit Mono Station controls separate hardware via CV, gate and modulation outputs, and has MIDI In, Out and Thru, so other MIDI gear can be connected. Passing an audio signal through the audio input opens up a world of analogue filtration and distortion. Using the audio input with the mod sequencer, a source can be modulated, evolved and processed in entirely new ways. Via USB, Circuit Mono Station can be plugged into Mac or PC, where unlimited patches can be managed using Components.

What's in the box? 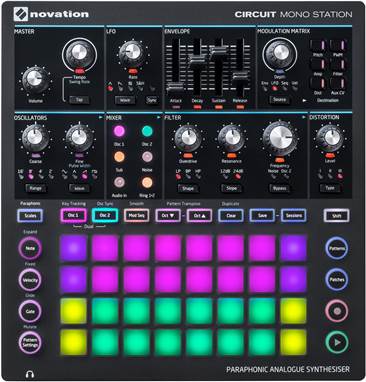 We'll get in touch when the Novation Circuit Mono Station is available.