What is a Baritone Guitar?! Our Experts Explain

Here’s a quick quiz: what do the Beach Boys and Metallica have it common? Apart from great fame, talent and wealth, naturally. Answer? Well, hopefully, you’ve sussed this already from the article’s title...but it is, of course, Baritone guitars!

Lots of people seem to be a little confused as to what a baritone guitar really is. Is it a bass? Do people still use them? No, and yes, but we’ll expand on this. Today’s blog will hopefully serve as a brief introduction to the world of the baritones: who plays them, what they sound like and how they fit into various genres of music.

First of all: what are they? A baritone guitar is a guitar with a longer neck which is normally tuned to B standard (B-E-A-D-F#-B, also known as ‘Baritone tuning’) or A Standard, which is a tone lower (A-D-G-C-E-A). This means that a baritone guitar is either a 4th or a 5th lower than Standard tuning.

The neck is longer to facilitate a 27” scale length. This is needed to allow the lower notes to intonate properly and stay taut enough to remain in tune. Aside from this, baritones tend to have slightly larger bodies but otherwise, they can be as varied as electric guitars. Traditional baritone guitars often have single coils pickups to emphasise the twang, whilst contemporary designs are likely to include high output humbuckers and aggressive styling for heavy rockers to use. We’ll check out both, but first, a little history...

Baritone electric guitars have been around since the 50s. Before that, there have been acoustic baritones, particularly in classical styles, such as our research has found. The exact date for when baritone guitars came into being is difficult to pin down as they, like all guitars, have descended and become infused with various other early stringed instruments from Europe and Mesopotamia over the centuries.

Baritones found their first real musical home in the surf genre of 1950s instrumental Rock. Their distinctive low twang and thick presence proved a perfect sound for the new age of teenage rebellion, rock ‘n’ roll attitude and cars with huge tailfins. ‘Peter Gunn’ by twang-king Duane Eddy is a most famous baritone song, otherwise known as the Blues Brothers’ theme tune. Without that distinctive baritone swagger, would this tune be half as effective?

The Beach Boys often used them to provide distinctive riffs to the intros to their songs. They, of course, typified the sound of pop in the age of surf culture so their influence cannot be underestimated. Check out the intro to Dance, Dance, Dance for a timeless Beach Boys baritone riff.

Hollywood soon got wise to the iconic sound of a low-slung baritone and made great use of it throughout the sixties in the scores for countless spy films and spaghetti westerns. We are certain that real-life cowboys pre-date the existence of the electric baritone guitar as we know it but what would a gunslinging epic be without a nasty, twangy riff? Exactly.

Glen Campbell knew this, of course, using a baritone guitar to play solos on a number of his hits like Galveston and Wichita Lineman.

In more modern times, millions of viewers have been made familiar with the tone of a moody baritone guitar via Angelo Badalamenti’s theme tune for cult (bonkers) TV show Twin Peaks. The beautiful and evocative theme tune centred around a languorous baritone riff, drenched in vintage amp-style tremolo and reverb. As Twin Peaks makes clear, baritones can be blissful as well as trouble-making.

If this is all that baritone guitars were useful for, it would be plenty! The baritone would have carved its small but vital niche as something of a specialist sound. However, that is not the case! Baritone guitars are well-known to producers for several other reasons, too. They are the ‘secret weapon’ that can be added to a good recording and elevate it into greatness.

Often, tracks of baritone guitars are doubled up in the mix alongside regular guitars in order to fill out the sound and give more sonic depth without necessarily being singled out in the mix. Another interesting technique is the ‘tic tac’ bass sound, a favourite of classic-era Nashville producers. Tic tac bass involves playing a muted baritone part. doubling exactly what the bass is doing note for note, giving the impression of one instrument. It’s a cool sound for sure, and one you can hear on famous tunes like Patsy Cline’s Crazy.

Brian Setzer has played some amazing things on electric baritone, proving that it can very much be a lead/solo instrument. The one everybody talks about is the live version of Mystery Train, for reasons that are pretty obvious when you start watching! Though he doesn't play one in the clip below, Setzer is a very commited Gretsch fan. For the budding baritone player, it's hard to beat the Gretsch G5260T Baritone guitar for retro twang and swagger! Tarantino would approve!

With the advent of Nu Metal in the 90s and Djent and Prog Metal in recent years, guitarists of a heavier persuasion have adopted the baritone as one of their main weapons for battle. Largely speaking, many extended range guitars from the likes of Ibanez, ESP Guitars and Schecter Guitars ARE in fact baritone guitars: if they have a 27” scale and are factory-set for a lower tuning, it’s a baritone! This is true for 7 and 8 string guitars as well as 6 string models. It’s more the context and look of these types of instruments that seem to keep them separate in some player’s minds. High ranking metal players like Machine Head’s Rob Flynn, Devin Townsend, Head from Korn and Stephen Carpenter from the Deftones are just a few examples of players who use baritone guitars for gigantic crunch tones.

One interesting example that sticks out is Metallica. We’ve all heard their masterful 1991 release, Metallica (better known by its unofficial name, the Black Album), but not so many people know that a very un-metal Jerry Jones baritone guitar was used on ‘Sad But True’! Indeed, at producer Bob Rock’s behest, the baritone was overdubbed alongside James Hetfield’s ESP guitars (all tuned down a whole step to D standard) to provide some ultimate crunch to what is surely one of their very best riffs. Fun trivia: the riff also contains additional overdubs for just the muted ‘Djent Djent’ parts for the riff, to bring an extra-apocalyptic ‘chug’ to the sound. Are there chunkier riffs than this? To paraphrase Nigel Tufnel, the answer is no. There are none more chunky.

For more metal-styled baritone guitars, we have a great selection at guitarguitar that includes the Chapman ML3 Baritone Bea and the Ibanez Iron Label RGIB21 amongst others.

One significant omission is The Cure’s Robert Smith. Whilst we at guitarguitar are all huge Cure fans and love Robert’s playing, we will be sticklers for detail here and point out that his inventive and game-changing playing on records like Disintegration is done using a Fender Bass VI. Now, although this is an extended range instrument that is lower in pitch (and therefore qualifies as a baritone guitar by our own self-made stipulations), Fender themselves refer to this instrument as a bass. It’s technically lower in pitch than a baritone, having a low E on the bottom just like a regular bass guitar. So, with that clarification made, we can respectfully dodge Smith from our ‘notable baritone users’ rundown whilst still technically including him anyway! 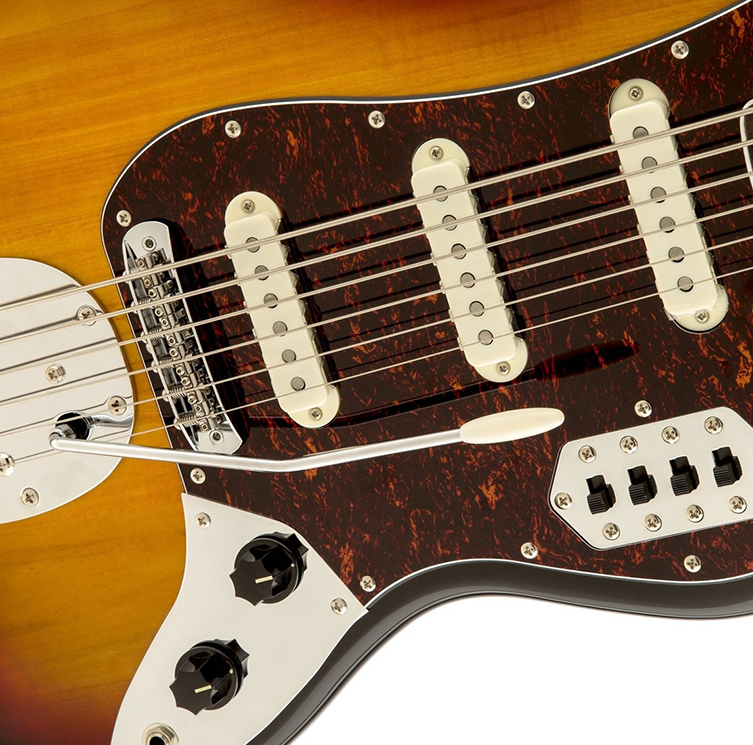 Most famous baritone guitar parts are by nature either twangy electric or chunky electric, but acoustic guitarists get to join in the fun, too! Dextrous virtuoso Andy McKee has made great use of an acoustic baritone guitar, as has Martin Simpson and Stu Thomas. Check out the Alvarez ABT60-CE (it's an 8 string with two 'double courses' of strings in the middle for an interestingly shimmery sound!).

We expect to hear and see more of this happening: there is certainly a taste for lower tunings in guitar music right now, and that doesn’t just refer to the new breed of technical metal bands. The scope and potential available on a baritone is very inspiring for a player. You do not have to re-learn any skill in particular in order to use and enjoy a baritone: just plug it into your usual rig, play the riffs and chords you already know and enjoy a whole new world of sound!

Thanks for reading, and be sure to check out our News Pages for more guides Interviews and Competitions!