A Closer Look: Our Favourite Pedals

Geeking out on new pedals is so much fun.

In our world of guitar gear, effects pedals are an exciting and relatively affordable way to dramatically change up your sound and your playing. 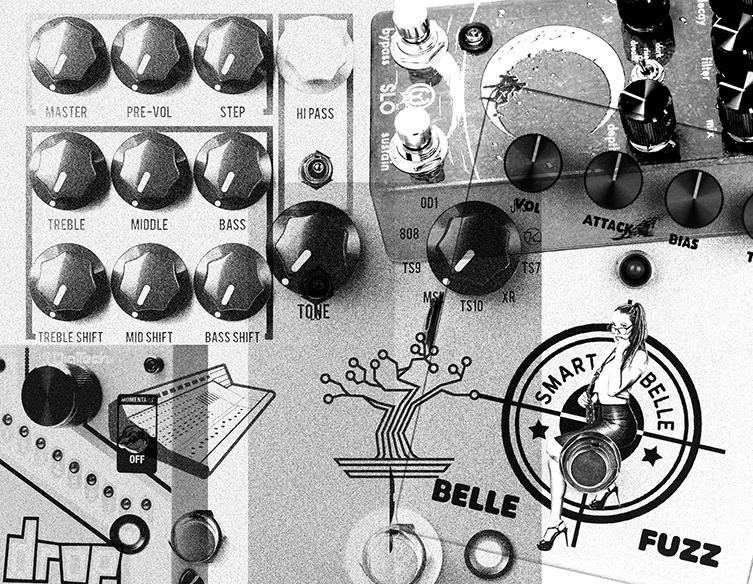 We’re saying this like you don’t already know that! We’re quite sure you guys love pedals as much as we do! So, with that in mind, today’s blog is just going to be an unabashed drool session over some of the hottest new and semi-new pedals out there just now. No brand focus, no style rules, just whatever we think is cool and worth mentioning!

Reverb pedals have never before been so diverse, or so powerful! It used to be that true processing was the realm of the rackmount, but those days are long gone, as humble stompers are becoming more packed with tech than the Batcave! This new model from uber-cool pedal gurus Walrus Audio, is definitely one for the more creative players out there. It’s a high-quality reverb with a ton of control but there’s more... how about built-in vibrato, octave and auto volume swells? 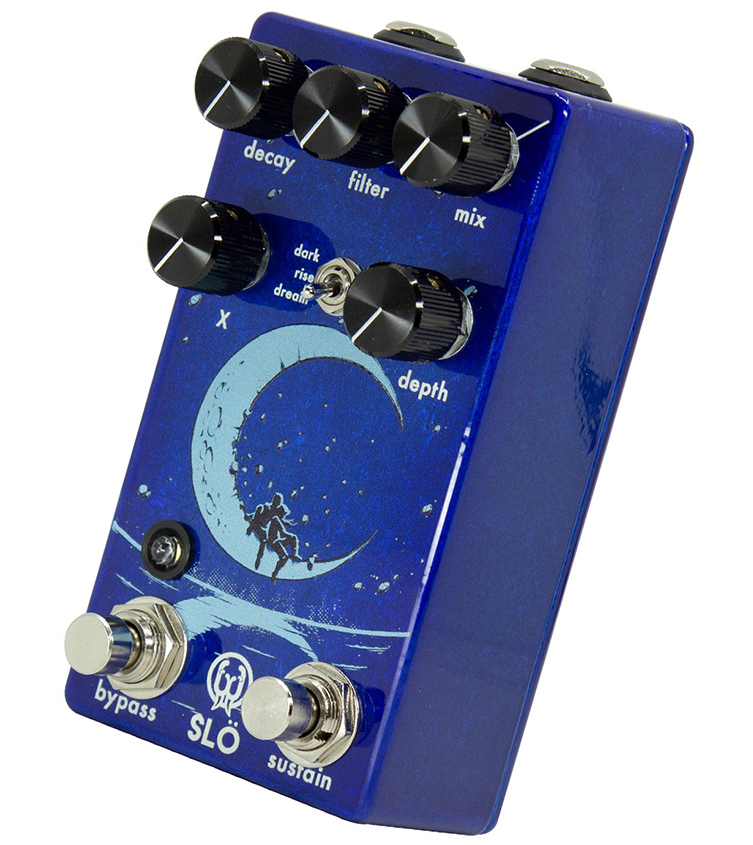 Yes indeed, there’s a lot happening here with the Slö. Three modes allow you to choose whether you want a subtle low octave to come in with the reverb signal, or a delightful and dreamy vibrato to accompany your bed of sound. It’s gorgeous, and the Sustain footswitch allows you to be really quite languid with your sonics. An ‘X’ control knob changes function depending on the selected mode, so you could have it changing the swell speed of the volume ‘rise’, or how much of that low octave you want coming in, or the depth of the vibrato...you get the vibe? It’s very powerful and controllable, but also super-straightforward to use. For ambient fans, soundscape players and guitarists who use texture and atmosphere, the Walrus Audio Slö is guaranteed to enthrall.

You like Tubescreamers, right? Guitarists who don’t are rather few and far between. They are just such useful and diverse overdrives. Nearly every type of player can put one to good use, either as a gain boost, a tone-shaper or a straight up dirt box. However, there are numerous models out there nowadays, including modded versions, reissues and high-quality clones. What to choose? 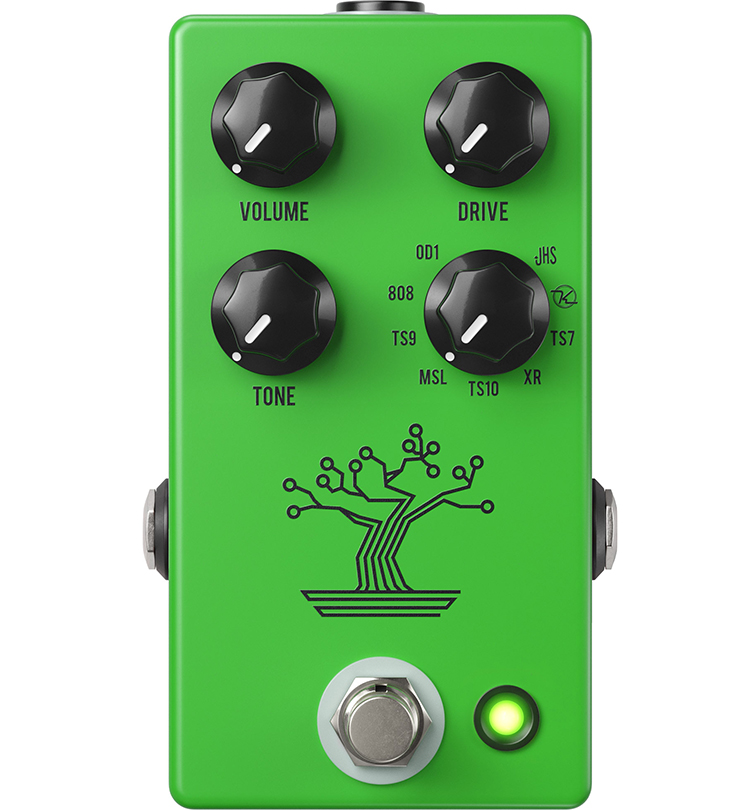 How about all of them? JHS, creators of gain boxes for Andy Timmons and others, have taken the hassle of choosing away by dropping 9 varieties of TS-style gain into the one pedal. Appropriately coloured, the JHS Bonsai offers up accurate takes on the famous TS9 and TS-808 tones, as well as a bunch of historic variants, AND popular mods like those carried out by Robert Keeley. It’s a bold move but an entirely sensible one!

Do you need 9 types of Tubescreamer? Maybe! Probably not, but you do need at least one, and finding the right one for you can be hard. This superlative pedal lets you try them all in whatever context, so you can select just the right flavour of TS midrange bump to bring your tone to full bloom.

Do these guys ever run out of ideas? Apparently not! New York City innovators Electro-Harmonix are the godfathers of the pedal scene, and it’s not just for their legacy products. EHX are great at giving us things we didn’t know we needed, and their new Cntl Knob pedal is one of those! 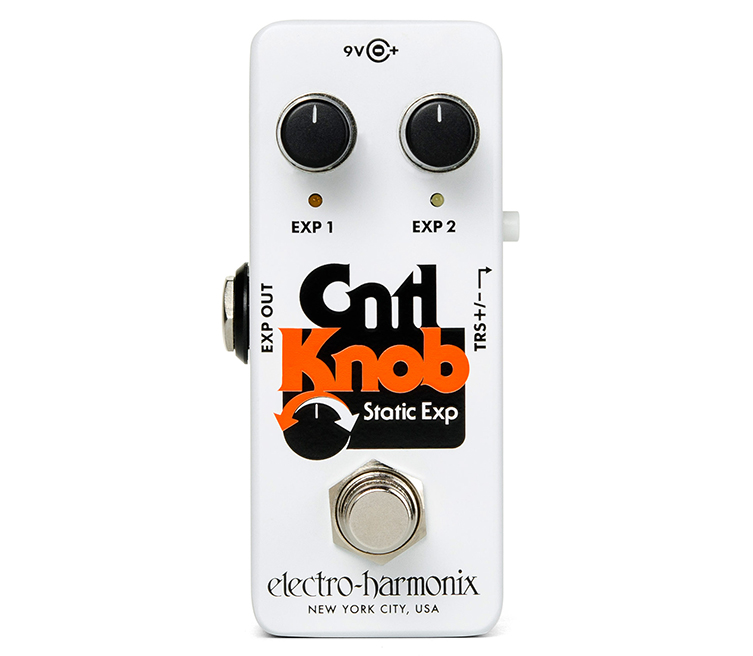 In a nutshell, the Cntl Knob pedal replaces an expression pedal, for any pedal has an output for one. Two preset settings on the Cntl Knob let you toggle between two given values, in a small, pedalboard friendly enclosure. This could be different octave settings, or different delay levels, or even a volume control! Just set the two knobs to the values you prefer and toggle them with the switch: easy! It doesn’t make a sound on its own but it’s a real facilitator for other pedals. You can open up potential in complex pedals that increasingly require expression pedal control. Pretty exciting stuff, especially given its small size and smaller price!

Smart Belle are a boutique amp builder from Austin, Texas. They know a thing or two about tone for sure, and that totally extends to their pedals. We’re loving their new Belle Fuzz, a supercharged take on a 1960s Tone Bender style fuzz. This pedal is known for its diverse selection of available tones, from smooth and sustaining to buzzy and juicy! You know what we mean! 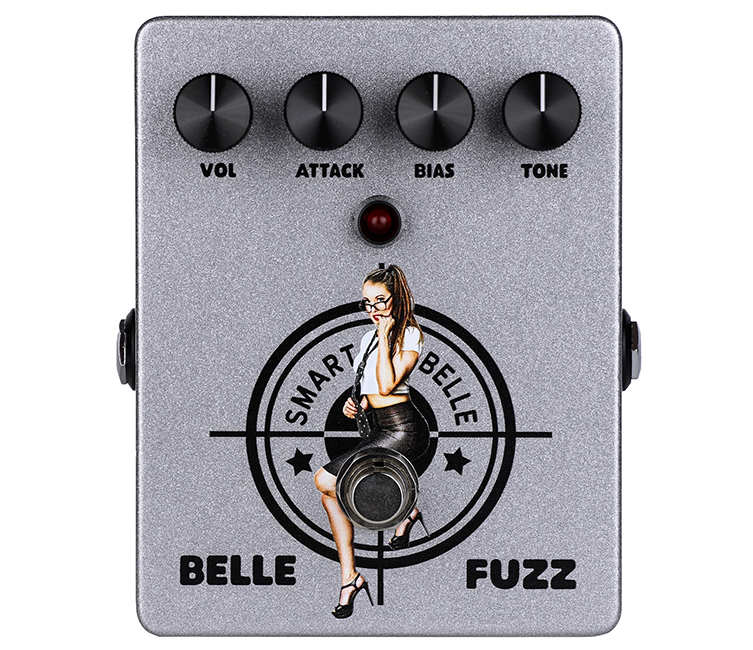 The Belle Fuzz has all of this, thanks to both a faithful recreation of the original circuitry, plus the addition of a Tone control and a Bias control. Back off the tone for ‘violin’ leads, or crank it for sonic assault. Pull back on the Bias knob and you be able to achieve that horrible/great splatter that happens when the best fuzzes go berserk! Stability is not part of the menu here! Keep a handle on the Bias control and you’ll be in rich vintage territory though, with all of the excitement that a wonderful fuzz pedal can bring to your playing!

TC pedals are always welcome around here. The amount of times we’ve taken a Flashback, Nova Delay or Hall of Fame along to a gig and regretted it have been precisely zero. They are great sounding, clever pedals that we love and rely on so it’s hardly a task to recommend the awesome Flashback 2 delay to you today! 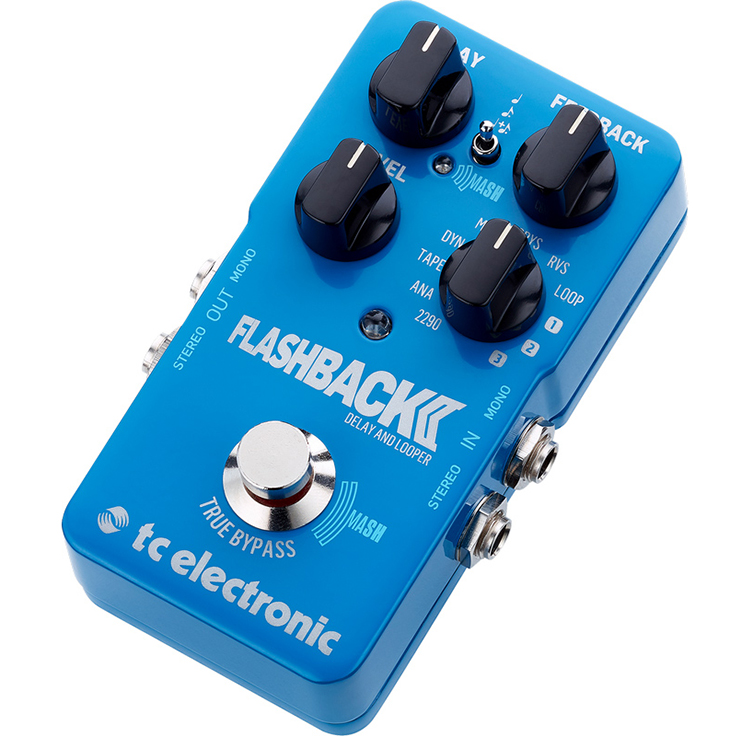 Stereo in, stereo out, loads of worthwhile delay modes, three positions for Toneprint uploads (in brief, Toneprints are presets relative to the pedal that you choose from TC’s website and literally upload to the pedal. The effects are sometimes not achievable from dialling in the physical knobs alone, so it’s pretty expansive, sci-fi stuff...) and a built-in looper make this the compact delay to beat. Truly, this can do most of the things that most people’s favourite vintage or modern delays do, with the tiniest of fuss. It’s a hugely confident performer.

Select subdivisions for the timing, get weird with reverse delays, indulge your inner Fripp with the looper, and come back with change from £100. Why haven’t you bought this?

This is quite an interesting proposition...it’s another boutique pedal from JHS, the second on our list today, but there aren’t too many like it. It’s a DI box, effectively, but it’s designed to sound and feel like you’ve plugged directly into a vintage mixing desk! From spanky, tone-some cleans to light overdrive and even retro sounding fuzz, the JHS Colourbox v2 gives you it all. 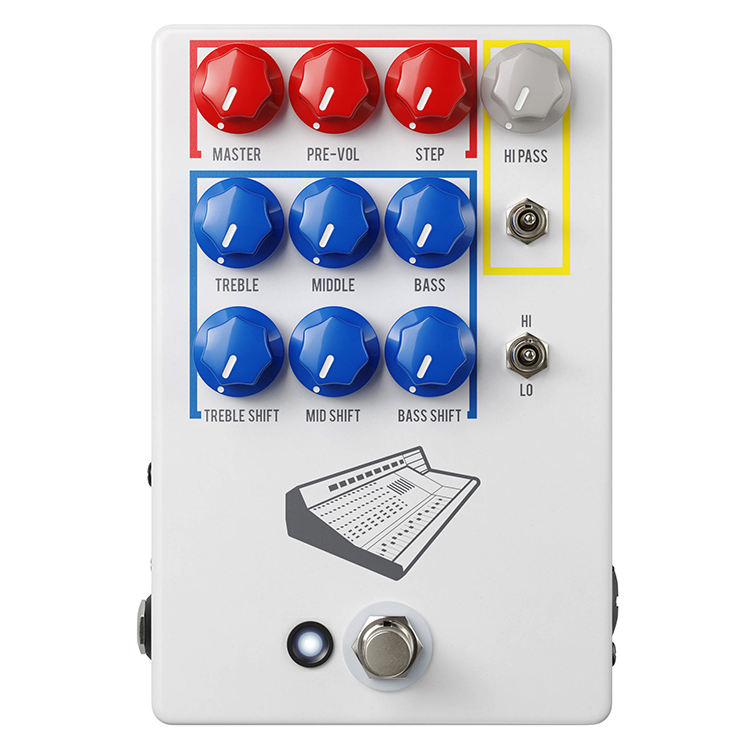 The functionality of this for recording is obvious, but it’s also great for live guitarists, either as a preamp before your pedals/amp or as a live DI box, if you’re after that kind of vibe. The possibilities and permutations of usage are significant, especially when the results are as good as they are here. There’s even a pad switch to take the heat out of powerful guitars and also phantom power! This v2 model lets you use standard 9v power, so there’s no need for an 18v adapter, which is great news!

Digitech, makers of the immortal Whammy pedal, have taken some of its sizeable pitch-shifting guts and put them into this rather tasty octave pedal. The Digitech Drop can take your guitar’s signal and ‘drop it’ (see what they did?) incrementally to a full octave down, stopping off at every semitone on the way. 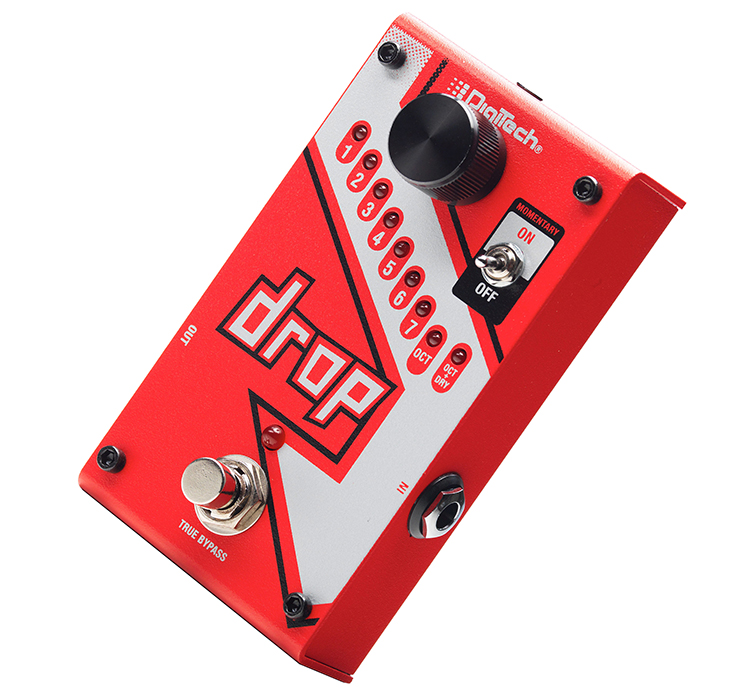 The tracking’s excellent, plus there’s a cool switch to have the pedal work either as a latch or momentary effect. In other words, you can have it so that the effect only engages whilst your foot holds down the pedal, returning to normal (i.e. off) when you disengage.

The possibilities for entirely new vocabularies of riff and lick are very real! Work this into your sound and you could become the next Tom Morello/Jonny Greenwood. That is not a promise, okay?

These are just a tiny little collection of pedals that we think are pretty awesome. There are a great many other fuzzes, delays and overdrives, all awaiting your critical ear and appraising toe! Perhaps this blog will be a good taster for you to delve in yourself and have a good root around our comprehensive effects selection. We have many boutique brands, as you’ve seen today, but we’re no snobs: we understand the power and glory of an inexpensive pedal too, and feel like the greatest pedalboards tend to have a bit of both! To that end, make sure you look at TC Electronics more affordable stuff, the Landlord pedals and of course EHX and BOSS, who still make some of the greatest pedals in the world. Our cheapest choice on today’s blog is under £40, so there’s fun to be had for every price point!

Charge on, friends, and enjoy the endless possibilities that effects pedals can undoubtedly give you.