Rock music and Horror make great partners. An unholy alliance, if you will. Both lie on the outer edge of culture, pushing against the grain of societal norms and revelling in the shadow-side of reality. Horror imagery abounds throughout most genres of rock, from classic to contemporary to extreme. Where would one be without the other? For every subgenre of Rock and Metal (and there are lots: check out our metal sub-genres blog for the skinny on that), there is a corresponding style, look and ambience that, in many occasions, is lifted straight from the equally vertiginous subgenres of horror. 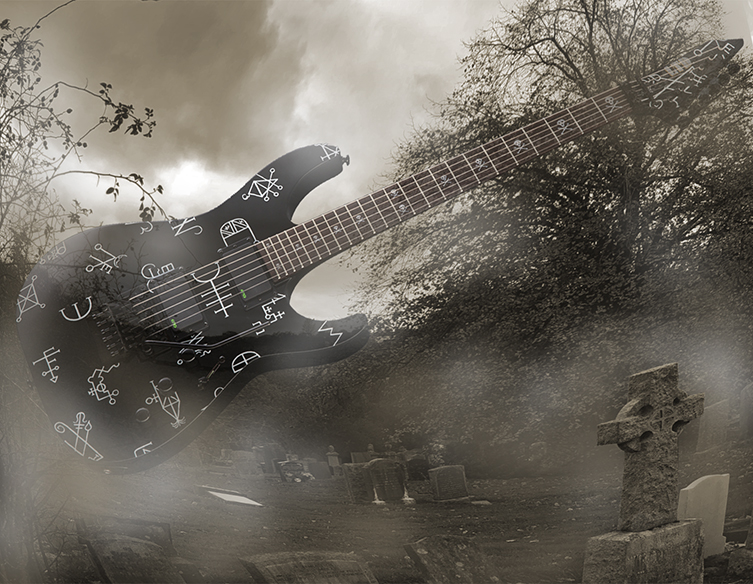 Today, there is a spooky atmosphere in the air as we put together this horror-themed piece. Autumn leaves fall in the streets, the sky has turned a slightly darker shade, and there are ghostly whispers on the wind. What better time, then, to bring together some of the greatest horror-influenced bands and musicians? The following group are all here to contribute to the spookiness of your day. We’ve decided to ignore chronology since it felt boring this time, as well as unnecessary. Horror, after all, never gets old. Just like vampires!

However you normally take your rock, spare a few minutes for these Spooktacular examples of horror rock greatness, and enjoy that delightfully macabre chill as it runs down your spine.

You may even find some good inspiration for Halloween costumes, too...

The original Doc of Shock, Alice Cooper was the first guy to commit to the now time-honoured gimmicks of stage blood and faux-sacrifices in his live show. As tame as it may look today, his antics were genuinely subversive in the 1970s, when he scared the hell out of parents and moralists everywhere. By declaring School’s Out, Cooper earned himself a ban for the video in the UK, thanks to famed sourpuss Mary Whitehouse objecting to people having fun. It still reached number 1, so Cooper, showing class, sent Whitehouse flowers as a thank you. All publicity is good publicity for shock-rock stars!

Called Vincent Furnier by his folks, Alice Cooper chose his stage-handle for how innocent it sounded, a stark contrast to the fire and snakes of his image. Torture played big in his stage act (he was often ‘given the chair’ during live performances), but offstage, Furnier is as well-known for being a golfer as for a musician. Not exactly Satanic, Vince.

Extraordinarily influential, the Misfits’ devastatingly simple blend of 50s pop music, endless horror references and increasingly heavy riffing has made then one of the most recognisable bands (and brands) in music. The ghoulish face paint, the ‘devilock’ hairstyle and, most importantly, a back catalogue of songs as melodic as they are macabre are all ingredients that have helped make the Misfits a major cultural touchstone for countless fans of horror and rock. People who’ve never heard a single note of their music will still instantly recognise their t-shirts and patches. That’s when you know you’re part of culture at large.

Beginning as punky upstarts with Glenn Danzig on vocals, they had their vibe on point from the start: simple, fast, memorable and full of B-Movie imagery. Who could possibly dislike The Misfts? A mid-90s turn to heavier sounds came with the Famous Monsters album and a new vocalist in the form of Michale Graves. Nowadays, the Misfits are somewhere in the middle, playing with either Danzing on vocals or bassist/leader Jerry Only performing vocals. It’s hard to keep up. Still, no other band commits to the ‘spooky’ like the Misfits.

Taking the blueprints from both Alice Cooper and the Misfits, and then attaching them to some (surprisingly) ‘safe’ and pleasant 70s-style rock is Ghost, the mysterious Swedish rock/metal band. Certainly, their image would imply a far heavier sound than the ‘hard rock Abba’ sound they deliver, but there’s no denying the quality of the songwriting. Where the Misfits went for B-movie monsters, Ghost instead use faux-satanic imagery and references to build their spooky world.

It may be true that we’ve heard it all before, but not dressed like this! Lead singer and sole songwriter Tobias Forge certainly commits to the cause with his successive ‘Papa Emeritus/Cardinal Copia’ personas, complete with facial prosthetics and innumerate ‘Evil Cardinal’ costume changes. You get the feeling that jeans and converse don’t quite cut it in his world, and that’s great news for anyone who wants a spectacular, theatrical show. Is that not everybody?

Inheritor to the spiritual crown of the bizarre from Alice Cooper surely has to be Robert Bartleh Cummings, more commonly known by his stage/directing name, Rob Zombie. Rob is so ‘horror’, he even has a second career as a successful horror movie director!

Rob Zombie elevates trash culture to a (sort of) high art, with his dress sense and artwork through his career proving as expressive and important to his overall vision as his songs. White Zombie, the band he fronted prior to going solo in the late 90s, had easily the best heavy riffs of that decade, blended in with broken breakbeats and cheeseball horror samples from genre luminaries like Peter Cushing. It proved an inspiring and massively popular melting pot, for sure. Given how uncompromising White Zombie still sound, it’s a pleasant surprise to learn how huge they were.

Rob solo work follows a pretty similar path, with the added bonus of genius guitarist John 5 (see our John 5 video interview from last time the band was in town), but the real classic stuff has to be White Zombie’s Astrocreep 2000, where guitarist J Yeunger destroyed the world with solid state amps and a collection of Ibanez Iceman guitars. Bring them back!

Anyone who likes Metallica will be aware of the band’s penchant for classic horror. It was there on early cuts like the HP Lovecraft-referencing Call of Ktulu (they obviously thought it unwise to go with the ‘official’ spelling of Cthulhu, sensible boys), through to Kirk Hammett’s awesome horror themed graphic finishes on his ESP guitars.

Horror abounds elsewhere in the Metalli-verse: Of Wolf and Man was inspired by werewolf flick Wolfen (not a recommendation to watch), whereas The Thing That Should Not Be picks up the Lovecraft mythos where ‘Ktulu’ left off. Most Metallica songs, in fact, would quite easily fit inside most horror movies quite easily. CHYYYEAH!

Is there a more blatantly horror-obsessed band than Cradle of Filth? From the vampire chic clobber to the concept album based on Elizabeth Bathory (google her if you have a strong stomach), these guys are no mere ‘adopters’ of a style: horror runs in their undead veins. For three decades, Cradle of Filth’s increasingly elaborate musical and visual expression has developed and incorporated all manner of horror references. Musically, they are an uncompromising bunch indeed, but there’s just enough of that dark romantic hear tin there to counterbalance the aural assault. Click through to our recent interview with Cradle’s bassist Daniel Firth, for more on these guys.

Goblin, the Italian Prog rock practitioners, are most notable for their avant-garde and super-effective score to Italian auteur’s seminal horror, Suspiria. Set in a dance academy (so much creepier that the phrase would suggest) one dark, rainy night in the German Black Forest, Suspiria is a horror film unlike most, with a very distinct atmosphere and look. Goblin’s score is by no means subtle – at several times throughout the movie, the band yell ‘WITCH!’ when you’d really rather they didn’t – but they prove to be a credible, if off-kilter choice for scoring the horrors of a satanic ballerina school. Suspiria is a uniquely powerful film with a uniquely powerful score. No mean feat!

Staying with Suspiria, the Radiohead frontman provides a quite unexpected and emotive score to Suspiria’s 2018 remake. Set in 1970s Berlin, this ‘homage’ is every bit as unorthodox and challenging as the original, and Thom Yorke proves an inspired choice for composer. Why is anyone surprised?

Mild-mannered Prog recluse Mike Oldfield has certainly had an unconventional career. His world-famous Tubular Bells albums are perhaps the most unexpected listening experience a mammoth-selling album could offer, featuring 20 mins+ songs that are built from wildly disparate movements. It’s almost like Mike was some ghostly fifth member of Pink Floyd who got his marching orders for being too oblique and weird.

His inclusion on today’s list is probably quite an obvious thing: those opening moments of the first part, which were used to astounding effect in The Exorcist. Funnily enough, the music is hardly in the movie at all, and certainly not during any intense moments, but the otherworldly sound of this intro permeates the feel of the entire movie. Stick it on now, and we defy anyone not to picture a silhouetted man standing outside a dark townhouse, lit by some unholy light. Brilliant.

Making films is presumably a difficult enough job, but horror icon John Carpenter is equally famous for providing his movies with their super-effective scores too. Did this man ever sleep? Perhaps he’s a vampire...

Carpenter merits inclusion in any discussion of horror music thanks to his Halloween theme (and his score for The Fog, and Christine and Prince of Darkness...) but he gets a salute in this Rock Meets Horror article because, of course, the man is out touring this stuff with a rock band! Playing a mixture of the film scores and newly written material in a similar vein (sorry), Carpenter has turned himself into a bona fide rock star, too. It’s all in a day’s work for this laid-back legend. Read more about this in our interview with his guitarist and collaborator, Daniel Davies.

You thought we’d missed them out, didn’t you? How can we talk about rock music and horror and leave the originators out? Horror is unashamedly all over Black Sabbath’s work, from the subtle (the debut cover, which is something beautifully serene and dreadfully threatening at the same time) to the overt (singing about Satan, wearing crucifixes, innumerate other examples...), and it all contributes to a pleasingly doom-laden mythos.

These guys bought full-on castles to live in, which is about as ‘horror’ as it gets. They have the meanest riffs, the best ‘taches and a longevity and influence over all heavy genres that has never diminished. Without Black Sabbath, there would be none of the bands listed above, and a whole universe of other riff-laden miscreants. They are the most important heavy band that ever existed, and their link to the horror genre is where everything else we’ve spoken about stems from. Best band ever? No, but then, who is?

Have a Frightful Halloween!

Thanks for accompanying us down this dark musical road. We’ll admit it: we were a little scared too, and we’re glad we had you here for company. We hope you’ve found our spooky collection of Horror Rock to be an agreeable accompaniment to your own Halloween festivities, be they of the Hocus Pocus variety or more like The Blair Witch Project.

Have fun out there, and remember... don’t look behind you...