Have you ever just wanted an amplifier that sounds perfect at any setting, no matter which guitar you use?

Have you dreamed of owning an amp that delivers clean sounds that are the equal to its crunch tones? And those crunch tones deliver the full range of expressive overdrive, from retro classic rock to full-on boutique style monster gain?

Have you had that dream too?

Sure, we have the obvious and instantly gratifying benefits of digital modelling, where you can switch between carefully recreated virtual amps all day long in order to find your favourite selection of tones. That’s great, but we’re talking about a physical thing, a proper valve head which creates its own sounds instead of borrowing them from somewhere else. A genuine, hand-built American tube amplifier.

It’s hard to find an amp that gives you everything at an equal level of greatness: most notable high-gain amps have pretty forgettable clean channels, and most boutique combos with great clean tones are pretty useless at producing spectacular distortion, regardless of any promises made by the builder. So, does such an amp even exist? Can guitar players ever find just one amplifier which gives all of the clean and overdriven tones that their heart desires, without compromise?

You already know we’re going to say ‘yes’, right? We’re talking about one of the original boutique amps, here; the name that, above all others, is revered and held in semi-mythological awe; the amp that, if fact, was becoming a myth until it was rereleased only two years back.

We’re talking about the Soldano SLO-100, of course!

The story of Soldano is synonymous with the Californian amp-modding scene of the 80s. Back then, in the most gloriously guitar-centric time for popular music, it wasn’t enough to own a roaring half stack: you had to have had it specially modified by some elusive amp wizard in order to get more gain/power/sustain/magic from it. Most of these secretive purveyors of the dark arts are pretty well known to guitar fans these days, since they’ve all gone on to build their own companies. Friedman, Bogner, Fryette (previously known as VHT of course) and a great many others all started out by diving into old Marshall heads and juicing them up with secret sauce for the spandex crowd. 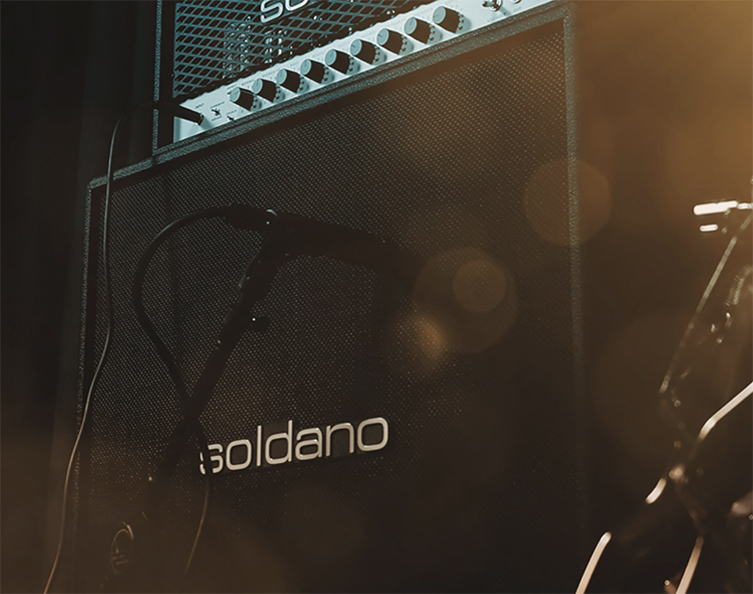 The days of bold graphic finishes on guitars may be gone (actually, they’re kind of on the way back…) but the tones coaxed by these OG amp modders are very much what guitarists still want, and of all of those people, none came more revered than Mike Soldano. In particular, his SLO-100 amp head (it stands for Super Lead Overdrive) was the tonal nirvana that players of all stripes dreamed of.

Mike originally built guitars in Seattle, and moved his attention to amps when his never-ending tone quest left him feeling short-changed by even the best amps of the day. His first run of hand-built amplifiers, made in 1985 in his parents’ basement, were experiments in overcoming those shortcomings he sensed in commercially available amps. After gaining some small levels of interest in his work, Soldano moved to Los Angeles to make a name for himself. 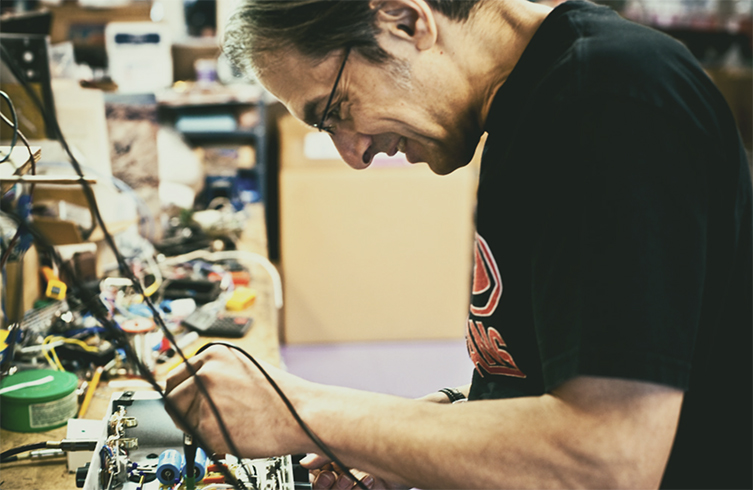 As with many of these stories, it didn’t all go according to plan. After a tough year of hardships, Mike was about to call it quits. Returning to LA to pack up after a family Christmas in Seattle, Mike checked his answer phone messages. There were three different messages on there.

One was from Lou Reed.

Another was from Mike Landau, and the third from Def Leppard's Vivian Campbell. They all wanted his amps! Word had gotten out about his work and the Soldano sound was what everyone was after. By Summer 1988, Eric Clapton and Mark Knopfler had ordered their own Soldano amps, and Mike had a 6 month waiting list. The legend was born.

That’s the backstory to this most esteemed of amp builders, but what’s the story today? Well, Soldanos have been off the market for a number of years. It was only in 2020 that the brand began building again, and the good news is that everything that made the original SLO-100 a formidable success remains without change. The few additional features are nods to today’s player, which keeps the amp doing what it was always intended to do: to be the greatest tube amp on the planet.

So, there are still two channels - clean and overdrive - and they share a very reactive EQ section. As you’ll see for yourself soon, the lack of dedicated EQ sections is no real problem here. The circuit itself is as it was, made with aircraft-grade components and hand-made transistors to ensure not only incredible tone but also complete reliability. 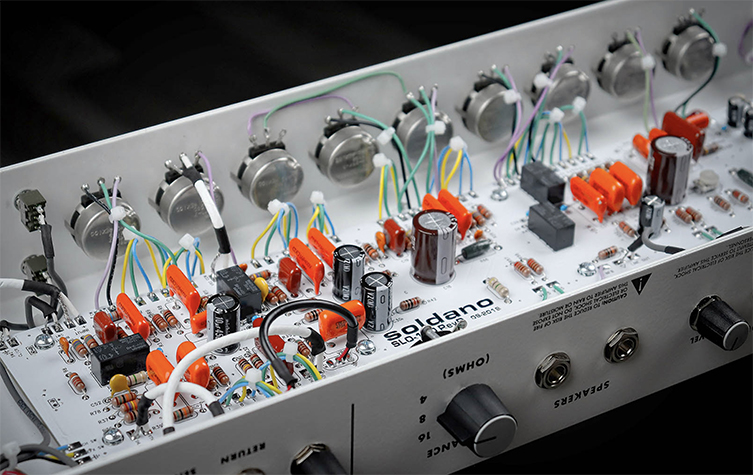 So, what’s new? A few things, but nothing that detracts from the tone. The most obvious is the addition of ‘Presence’ and ‘Depth’ controls on the front panel. These work within the power section and are much as you’d expect from other amps like this: they are for ‘tuning’ the final sound to whichever cabinet you use, and whichever room you happen to be playing in.

There’s a modern grounding circuit included to give a better signal-to-noise ratio between channels. The channels themselves are now selectable from the front panel too, and the customary ‘crunch’ and ‘bright’ microswitches are there for the clean and drive channels, respectively. Lastly, there’s a tube buffered FX loop for your ambient effects. Otherwise, ‘it is as it was’, which is a great relief to all guitar players! The most important elements - the tones - are as spectacular as ever. But don’t just take our word for it: have a listen below!

We could spend a while describing the harmonically rich clean tones and superlative overdrive sounds, but since we are a guitar store, why not show you? We’ve filmed four quick videos for you to get an instant idea of just why we are so excited about having Soldano boutique amps back.

We’ve taken two delicious guitars of the highest quality to hopefully demonstrate how effortless it is to get phenomenal tone from the SLO-100. We’ve got a Gibson Custom Shop Murphy Lab ‘59 Les Paul, and for significant contrast (and fun, let’s not pretend), we’ve also used a genuine vintage 1963 Fender Stratocaster that we just happened to have lying around, you know?

First off, here’s the Soldano on its Clean channel, with the Les Paul…

And now here is the same with the Stratocaster. Same player, same settings on the Soldano.

What a difference! Each guitar sounds superb, but retains its own inimitable character. People who say Les Pauls aren’t great for clean tones can be safely silenced with that clip of Tom’s playing there!

As for the Strat, it’s about as ultimately ‘Stratty’ as it’s possible to get! Glass and sparkle for days. Hardly what most would expect from a 100 watt high gain monster, is it? That is partly due to the use of 6L6 power amp valves, which is an unusual voice for such an amp circuit. Right, speaking of gain…

Proof, if ever it were needed, that a great Gibson guitar into a great tube amp is simply one of life’s great pleasures. Mighty! That tone is ferocious but super detailed. There’s nuance and dimension to match the saturated brutality. Talk about working those valves! If these tones don’t excite you, we respectfully recommend changing instruments altogether.

So, that was the ‘59 Les Paul: what will our vintage Strat make of the humongous Overdrive channel? Let’s find out…

Well, now that says it all! Check out the settings on the amp each time for these high gain tones. Everything is more or less sitting at 6 throughout, for each of the guitars. It’s very hard to find an amp that works so well with a Les Paul also bringing the best out of a Strat, too. It’s worth remembering, of course, that none other than Stevie Ray Vaughan hunted down Mike in the 80s for a Soldano amp of his own! SRV knew a thing or two about working his amps to get pretty nice Strat sounds, right?

Those four videos probably sum up the appeal of the Soldano SLO-100 with far more eloquence than we could by merely describing. Taking these two relatively opposing guitar models as a basis for comparison, it’s easy to project how your Telecaster/PRS/Superstrat/whatever you love will correspondingly sound. From the era of gunslingers comes an amp that was designed to be simply the best. Over 30 years on, the Soldano SLO-100 is still very much that: the best.

We have them in stock now. There’s little else to say except that if you really want to plug into the very best, then this is what you want to plug into. Whichever guitars you play, and whichever styles, you’ll sound magnificent through a Soldano SLO-100.