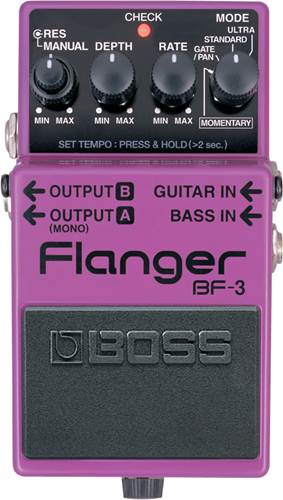 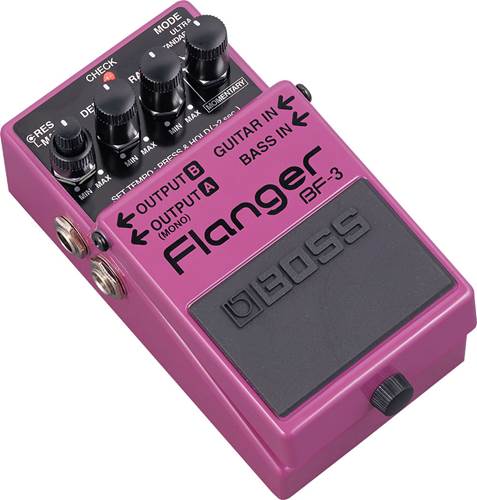 The 'purple' flanger is a genuinely classic pedal from Boss! Popular in the alternative scene with guitarists like The Cure's Robert Smith and The Smashing Pumpkins' Billy Corgan, the Boss Flanger has always been a defining and powerful version of this attention grabbing sound. From lush chorusey-sounding colour to dramatic jet-engine sweeps, the Flanger is a powerful tool that, when used sparingly, can be incredibly effective at elevating your guitar parts. Just check out 'Unchained' by Van Halen or 'Numb' by U2 to hear some very well placed flanger moments.

The BF-3 by Boss does not rest on the considerable laurels of it's predecessor, the BF-2: it ups its game quite dramatically. This pedal has inputs for both guitar and bass and works equally well with either. It has stereo outputs to really make the most of the huge sweep on offer: stereo modulation has to be heard to be fully appreciated!

There are now four separate modes to select: NORMAL, which will give you the sound you know and love; ULTRA, which totally dominates your signal with a massive and thick sweep for intense drama; GATE/PAN, which adds a kind of tremolo effect to the flange for an amazing shifting pulse sound that's straight from a sci-fi movie; and finally MOMENTARY, a clever and useful addition that makes the effect only active as long as your foot is pressed down on the pedal. This is really good for just adding little Flanger accents to your playing on the fly: it's much easier than tapping the pedal on and off constantly!

The BF-3 gives you a host of high quality flanger sounds and lets you be really creative with how you incorporate that into your playing. Be warned though: this thing EATS up the batteries! It's a very power-hungry pedal so please consider adding a Boss PSA power adapter to your basket if you're not using this with an integrated pedal board. It's understandable really, with all the power and processing on tap here! Get creative with an effect that can be used in so many interesting ways.

Two new modes (Ultra and Gate/Pan) create stereo flanging with incredible depth--even Slicer-type effects and sounds that seem to "swirl" around the listener. An instant classic.

Was exactly as I'd expected

We'll get in touch when the BOSS BF-3 Flanger is available.