Ex display model. There are several scratches and scuffs to the casing. Comes as is, no original box, power supply or manual.

Multi Modeling
The VG-99 contains an incredible range of COSM-modeled guitars and amplifiers including new electric, acoustic and bass guitar models, a new GR-300 synth wave and much more. It even models two signal paths at once. Complete dual processing of guitar modeling on the VG-99 allows you to play two different guitar sounds simultaneously. For example, one virtual guitar could be a Telecaster® in a vintage Tweed amp with full effects and the other a nylon-string guitar with just a hint of reverb.

Dynamic Control
Both modeled guitar and amp paths can be active at the same time, or they can be dynamically switched or blended. You can control the switching behavior between virtual guitars and/or amps by foot controllers, buttons/knobs on the unit, or according to your picking dynamics. Imagine playing softly for an acoustic-guitar sound, then transitioning to a full metal blast simply by picking more aggressively. Furthermore, each modeled guitar can be separately assigned to individual guitar strings. For example, you could have a 12-string guitar on 1st to 4th string and Synth-bass for 5th and 6th.

Alternate Tunings
The VG-99 can produce custom tunings — anything the player desires on any virtual guitar. A virtual Les Paul®, for example, could be tuned down four or five steps for a heavy sound, while a nylon string could be tuned as a 12-string, and also tuned down four or five steps at the same time. Open and drop tunings are also supported as well as user-defined custom tunings and can be applied to any COSM® guitar, so the player can switch instantly between tuning setups without physically switching guitars or having to manually retune.

Guitar Performance in Higher Dimension
With its new performance-based design, the VG-99 can be placed within a player’s easy reach on stage by using an optional PDS-10 stand. This new style setup allows various new performance possibilities such as D BEAM, Ribbon Controller and more. In combination with the versatile new foot controller FC-300, the VG-99 takes your guitar performance on stage to a whole new dimension.

Most Wanted
You asked for it, now Roland delivers the most-requested new features in the VG-99, including an onboard guitar-to-MIDI converter for direct connection to keyboards, sound modules, soft synths, etc. Audio output via USB or S/PDIF digital out, and optional RAD-99 rack mount adaptor further enhance your music production environment. Built-in stereo XLR and 1/4" outputs are ideal for live stage performances and touring. The striking new on-screen editor makes programming the VG-99 super easy and fun.
Was £1,179.00 Save £680.00

Item arrived as described, on time and well packaged. guitarguitar kept me informed from purchase to delivery on the items progress. Great price, and a super service. Will use again. 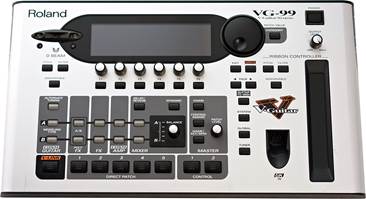