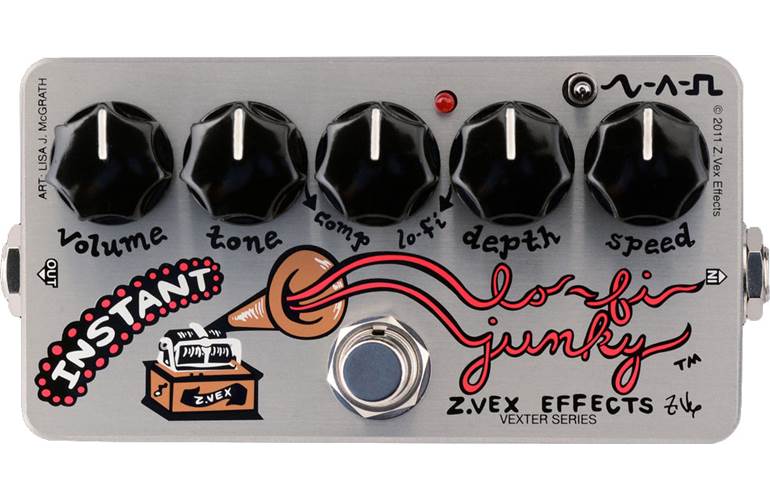 Any of you who’ve heard the sound of the Lo-Fi Loop Junky will understand this pedal immediately... its purpose is to imitate that sound in real time. Joel Korte, the extraordinary engineer behind this new device, was able to create a combination of THAT chip compression, Belling bucket-brigades, and ultra low-current National Semiconductor op-amp filters to exquisitely copy the texture and feel of the original Lo-Fi into this new and extraordinary box, adding some new sounds that have never been heard before.

To get the basic real-time Lo-Fi sound, turn the middle knob all the way to the right and set the waveform switch to triangle. By adjusting the speed and depth it’s pretty easy to achieve a very similar texture to the original Lo-Fi Loop Junky. Lower the tone knob if you wish to darken the tone.

Next, try turning down the middle knob all the way toward the “comp” side. With this setting you’ll enjoy a remarkably spanky bright and clear compression. It lasts forever but has dynamics like there’s no tomorrow. As you turn the middle knob back toward the Lo-Fi side, you’ll hear the chorus blend start to happen. The sparkly clear compressed signal will mix with the smashed, lo-fidelity warbled signal and become a luscious emulsification that can be blended to the most perfect depth. Unlike other choruses where the only depth control you have is the depth of the sweep oscillator, this unit lets you set exactly how much of the two signals are present in the mix... more clear compression if you want the sound to be basically clean with a hint of chorus, blended 1-to-1 for pure chorusing sound, or mostly vibrato with a hint of chorus by turning the knob mostly to the right. The chorus sound sounds most traditional with either the sine or triangle setting. They are subtly but noticeably different.

Now try switching the waveform to square and set the middle knob mostly to the compression side (to the left). You can blend in just enough of the square-wave modulated Lo-Fi sound to make it really eerie. For the spookiest sound, set the speed control to the tempo of your performance and the depth all the way up, adjusting the mix for just enough modulation. I really love this setting... it’s so unusual and fun.

We had a producer come through our booth at the NAMM show when we were demonstrating the Instant Lo-Fi in 2011, and we turned it off to show how much sustain the compressor had when it was engaged. He looked at Erik (our demonstrator) quizzically and said “but why would I ever want to turn it off?” Maybe you’ll feel the same way about the Instant Lo-Fi. It’s dangerously addictive.

Operation
Plug your guitar into the input jack and your amp into the output jack (or you might mix it with other pedals). It can be anywhere in the chain, providing different textures depending on it’s position in the lineup.

Volume: Overall output volume for the unit.
Tone: Can be used to lower the brightness of the Lo-Fi signal (the vibrato sound). Does not affect the compressed signal.
Comp/Lo-Fi: Adjusts anywhere between full compression and full vibrato mix. Blending the two (somewhere between the extremes) creates a chorusing sound.
Speed: Adjusts the speed of the Vibrato (only affects the Lo-Fi sound).
Depth: Sets the depth of the Vibrato (only affects the Lo-Fi sound).
Waveform: Sets the waveform of the Vibrato’s modulation. The traditional Lo-Fi Loop Junky simulation setting is triangle.

We'll get in touch when the ZVEX Vexter Series Instant Lo-Fi Junky is available.