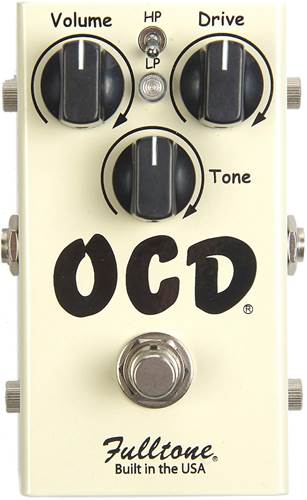 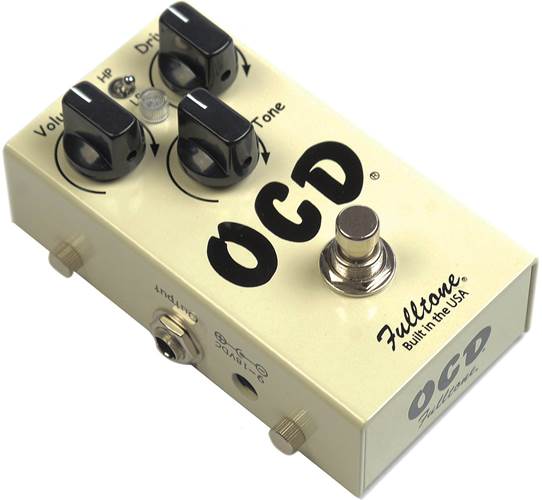 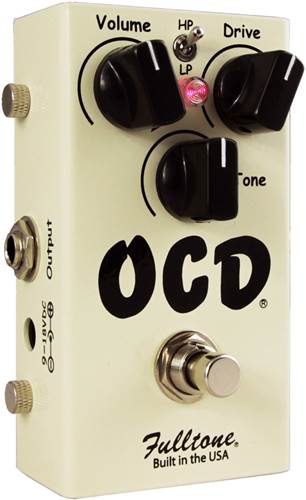 The Fulltone OCD has achieved legendary status amongst guitarists with taste. Rather than rely on association with a mythical, illustrious past, The OCD earns its reputation with sheer quality of tone, usability and adaptability.

This is the type of overdrive/distortion that almost every guitarist can find space on their pedalboard for. With the gain turned low, the OCD breaks up in a pleasingly natural way, making you want to play and play. Turned up, you get a thick and dynamic roar not unlike an old plexi head with everything on ten! The gain on tap is considerable without being excessive: the point is, the OCD works well with other overdrive units so you can achieve interesting blends and flavours of clipping and saturation. The translation of picking attack allows the player to really articulate in the manner they want without unwanted levels of compression. The OCD also adds extra natural harmonic content to your notes: extra overtones just like a great old valve amp reacts when cranked.

In short, YOU play the OCD, it doesn’t play you. It will complement what you have and what you play, though be warned: there isn’t anywhere to hide either! If you give your playing everything, then this responsive and articulate distortion will meet you in the middle and give you that natural expressive edge.

So, it doesn’t take a genius to work out why we were so curious when we heard that the Version 2.0 had been developed. Its design has only been tweaked to make it more practical and efficient, with some small changes to its shell. However, the main changes behind Version 2.0 lie beneath the hood.

The latest member of the OCD family has been fitted with a new output buffer which helps to reduce feedback and noise from other pedals in your line up. This also allows more sustain on the sound itself meaning that you get as much out of the effect as possible. Similarly, the addition of Fulltone's new Class A configured discrete 2N5457 JFET input section gives the OCD V2.0 far better interaction with both humbuckers and single coil pickups than the previous model. This means that whatever your pickup preference, the new OCD will be able to provide a solid, thick tone that doesn't waver.

Possibly the most intriguing new feature, is the introduction of a Enhanced Bypass and True-Bypass switch. Enhanced bypass is a new generation of buffering technology developed by Mike Fuller with the intention of combatting signal loss for the modern player. Designed to be used alongside other effects and pedals, enhanced bypass amplifies dynamics to allow more control over expression when playing, giving you an even richer sound than if you'd plugged straight into your amp. This means that even when the pedal is off, you'll notice the difference in just including it in your signal chain!

Not much more to say about the OCD that hasn't already been said. I like the slightly more aggressive/higher gain V2 vs earlier versions.

Very good price offered for a top pedal. Very pleased with my purchase

Amazing and simple to use pedal. Really touch sensitive too which is awesome.

Staple pedal in so many guitar shops and demos, can?t go wrong.

Present for my son so I haven't used it

We'll get in touch when the Fulltone OCD Obsessive Compulsive Drive V2 is available.