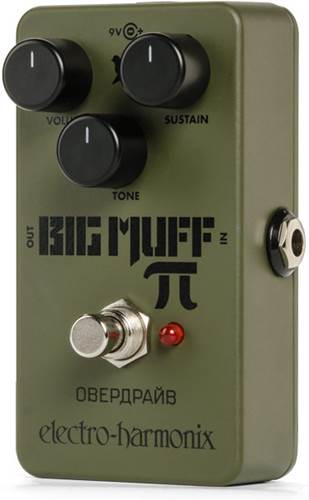 Before Electro-Harmonix began reissuing the Big Muff Pi fuzz from their NYC headquarters, theBig Muff was being made in Russia from old tank parts! These Russian Muffs (stop it) had a slightly different tone: more low end, more aggressive and less smooth. This pedal was essential to the whole Sludge/Doom movement and E-HX are honouring its reputation with this nano-enclosured tribute!

This new nod to the mid 90s Russian model sounds exactly as you'd expect: big, abrasive and containing a large degree of 'woof' like all great Big Muffs have! They've kept the army-green colour scheme too and incorporated True-Bypass switching to improve the quality of your signal chain when the unit is disengaged. We welcome the return of this old war hero!

Kongratulations Komrades!
You now have in your possession the authentic reissue of the legendary Green
Russian Big Muff Pi. We should know, we built the original. Now you’ve got the exact
same sound beloved by guitarists and bassists alike at your fingertips, but in a
smaller, more pedalboard-friendly enclosure. So, throw off your chains and unite with
the finest harmonic distortion-sustain device ever made.

OPERATING INSTRUCTIONS
VOLUME Knob
Use the VOLUME knob to set the output level.

SUSTAIN Knob
The SUSTAIN knob adjusts the amount of sustain and distortion.

Footswitch & Status LED
Use the footswitch to toggle between effect and bypass. The Green Russian Big Muff
is active when the LED is lit. When the LED is off, the pedal is in true bypass mode.

IN Jack
Plug the output of your instrument or another effects pedal into the ¼” IN jack. The
input impedance presented at this jack is 130kΩ.

POWER!
Powering the Green Russian Big Muff Pi
The Green Russian Big Muff Pi may be powered from a 9V battery or an optional
9VDC AC Adapter such as the EHX9.6DC-200 or any Boss® or Ibanez® style AC
adapters capable of delivering at least 30mA. Plug the output of the adapter into the
9V power jack located at the top of the pedal. The battery may be left in or taken out
when using an AC Adapter. The current draw is approximately 2.2mA at 9VDC.

Fat rich sound, sustain for days! Pedal board friendly too!

Brilliant guitar pedal, recommended by staff. Much better than the one we originally intended to buy.

Great fuzz sounds that work in a lot of different ways. Very powerful when engaged. The low end is retained beautifully even in the typically high settings also. A go-to fuzz pedal. Powerful for a small piece of equipment.

Great sound and well made.

Great sound and well made.

Great product. Was after a great sounding Muff. Was excited to see the Green Russian had been re-issued. Compact and lightweight.

We'll get in touch when the Electro Harmonix Green Russian Big Muff Distortion/Sustainer is available.