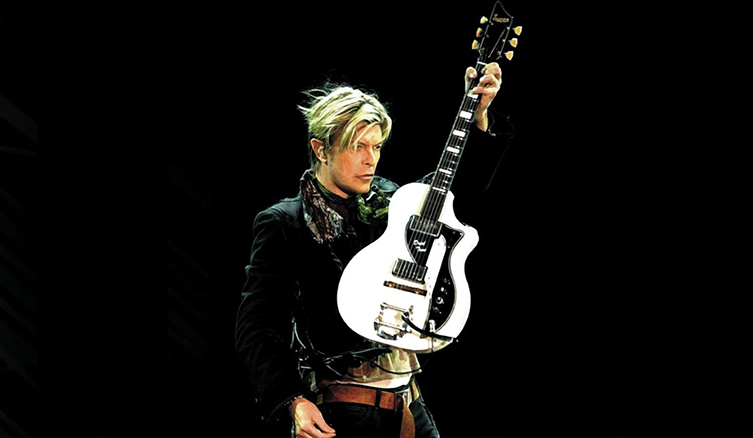 In the hyperbolic world of rock stardom, there are endless precocious individuals, with varying degrees of talent, who pronounce themselves to be geniuses. To a large degree this is a matter of context, timing and perspective but in the history of popular music there are a few genuine examples: ‘legends' are far easier to find: Otis Redding, Jim Morrison, Madonna, Bob Marley…but genius? It’s tough. Elvis Presley, Jimi Hendrix, Bjork. Who else? Prince? Definitely. There is, however only one artist who inspires instant and unanimous agreement in his status of stratospheric, other-worldly genius  and that is David Robert Jones from Brixton. Whether you know him as Ziggy, the Thin White Duke, Aladdin Sane, Jareth the Goblin King or plain old Dave, no one in the history of music made such a dent in culture and left such a lasting legacy of potent art. 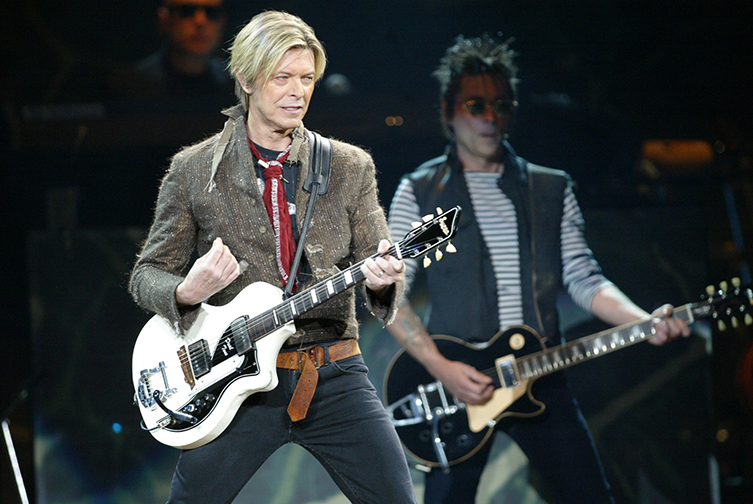 When David Bowie died on January 10th 2016, the world at large suffered the shock of the death of a genuine Learned Master. Throughout his 40+ year music career, Bowie had the uncanny knack for picking the absolutely correct musicians for each stage of his glittering, multi-faceted career. Doing this once is hard enough but to repeatedly select teams of brilliant artists to perfectly paint his visions is like repeatedly catching lightning in a bottle. Now, with the announcement of a new limited edition Supro David Bowie Dual Tone guitar (more of which later!) we wanted to take a quick tour of some of his most celebrated (and some of his most underrated!) musical companions throughout the years, highlighting some great playing, unforgettable songs and most importantly, some sweet gear! 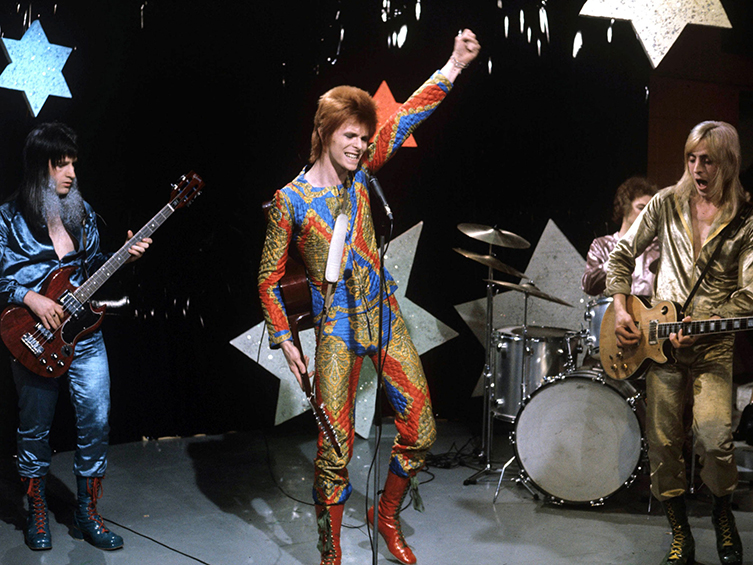 Beginning near but not at the beginning, we would like to salute the greatness that was Mick Ronson. A tasteful and melodic guitarist, this Spider From Mars was rarely seen without his awesome 1968 Gibson Les Paul Custom with its stripped back finish, plugged into a frankly monstrous Marshall Major 200 watt head. This iconic pairing in fact inspired the Sex Pistols’ Steve Jones to grab his own Les Paul Custom in tribute. Ronson’s sound was controlled yet wild, hummable yet rhythmic: for a guitarist in the classic rock period, he had it all. He was also quick to get hip to the half-open wah wah sound: check out the main riff to Ziggy Stardust for ample proof of Ronson’s riffing, writing and sonic ability. Mick’s Les Paul started life as an Ebony model and he stripped the finish off the front in order to get more top end in his tone. That’s also why the pickup covers have been removed. Whether it worked or not is hard to know but what is easy to see is how flat-out AWESOME it looks! Why is there not an official signature Mick Ronson Les Paul? 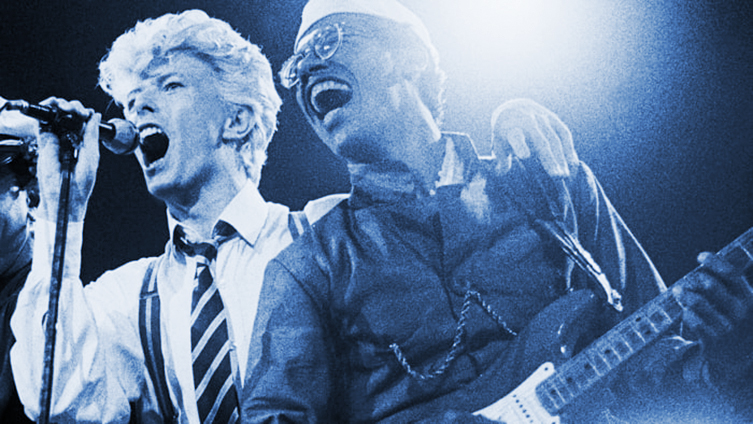 One of David’s most important musical collaborators is Carlos Alomar. Guitarist, musical director, backing vocalist and occasional co-writer with David on many of his most successful periods including Young Americans, the Berlin Trilogy, Scary Monsters, Outside and two of David’s latter period albums Heathen and Reality, Alomar collaborated on a total of 12 Bowie albums. First working together on 1975’s Young Americans album, many of Bowie’s most distinctively funky riffs belong to Alomar: Golden Years, Sound and Vision, Stay, Everyone Says Hi, the list goes on… This Puerto Rican guitarist was David’s right-hand man for many years, providing an easygoing foil to Bowie’s unearthly and dramatic charisma.

Guitarwise, Alomar played a rake of different models but tended to focus on Stratocasters of various permutations including Kramers and custom Brian Moore guitars. He was also a big fan of headless guitars, something that is now making quite a resurgence! 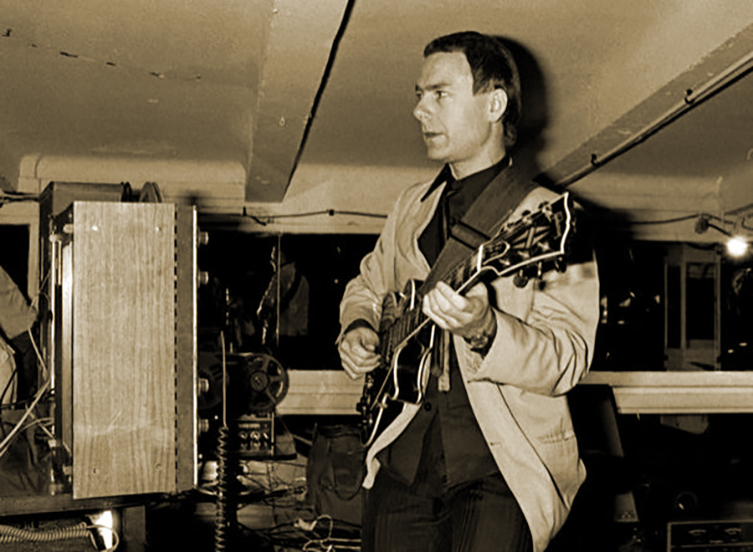 Next up we are gong to highlight another famous fan of the Les Paul, King Crimson’s Robert Fripp. Fripp has appeared on a number of Bowie albums including the massively influential “Heroes” and Scary Monsters. A technically gifted player, Fripp’s most famous piece of playing also shows him at his most understated and glorious: those soaring, sustaining lines that echo David’s hopeful, passionate vocal on Heroes’ title track. Surprisingly for such a fussy player, Fripp recorded his parts directly into the desk, using the studio monitors to overload the sound into natural feedback. There are no E-Bows or other devices at all and the finished performance is a composite of three guitar parts mixed together. Considering how much he lets loose on Scary Monsters (with some of the most joyfully atonal guitar parts ever to reach the Top Ten: check out the lead playing on Fashion and then try to recreate it), it is illuminating to witness how much he holds back with his playing: testament to a true artist who hears what is just right for a song and then executes it wholeheartedly and without ego. Fripp’s most used instruments at the time were two similar three pickup Gibson Les Paul Custom Black Beauties, possibly a 1959 model as the main choice and a 1957 model as a backup (those were the days!). Fripp himself has said that “it’s serial number 53” so whichever one he means, they are both very early examples! These were his main Crimson guitars too, at least up until the ‘Discipline’ era of the early 80s. Another example of removing pickup covers from the Les Paul, Fripp is more pragmatic than anything else: “(King Crimson Lead Singer) Greg Lake suggested that I would get a better sound. I still don’t know whether it makes any difference, but I left them off anyway. Probably because I don’t want to hassle putting them back on again.” 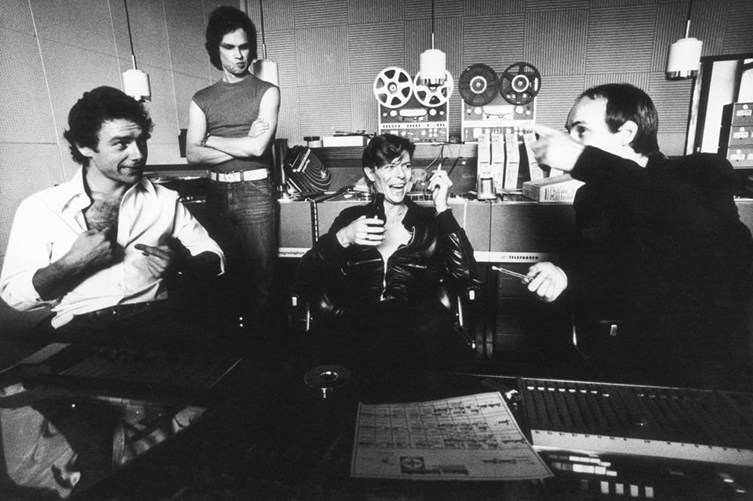 It’s not just guitarists we want to look at, although we’ll get back to them in a second! Keyboards and synths have played a huge part in Bowie’s music from the beginning. His famous Berlin trilogy even included two records (Low and “Heroes”) that were half instrumental! These early ambient symphonies were made in collaboration with the justifiably venerated Brian Eno (or Brian Peter George St John le Baptiste de la Salle Eno, to allow him his vast full monicker). An ex-member of Roxy music, Eno made a perfect intellectual foil for Bowie with his experimental approach to creativity, informed by his art school education. His ‘Oblique Strategies’ cards are perhaps a story for another day but his questioning of accepted studio practice and standard musical composition conventions led to several musical breakthroughs for David, who was at that point feeling extremely jaded about rock music. Although self-deprecating about his own skills on instruments, Eno is an accomplished synth player who is widely known to have invented the ‘ambient’ genre of music. His preferred synths during the Berlin Trilogy era included the EMS VCS3 (famously housed in a suitcase and with a joystick instead of a keyboard, which was external), the EMS Synthi (also in a suitcase but this time featuring a blue and black touch-keyboard), the Yamaha CS80 (the same synth used by Vangelis for his Blade Runner soundtrack) and the omnipresent Minimoog. Such instruments these days are beyond rare and command correspondingly scandalous prices (we recently saw a working CS80 on sale for £18,000…) but thankfully companies like Arturia provide exhaustively close digital models as plug ins. Moog fans can get extremely close to the glory days with models like the Subsequent 37, still handmade in North Carolina! Native Instruments have a wide range of incredible soft-synths in their Komplete package, including vintage mono synths and things you’ve probably never heard before! Eno would approve. 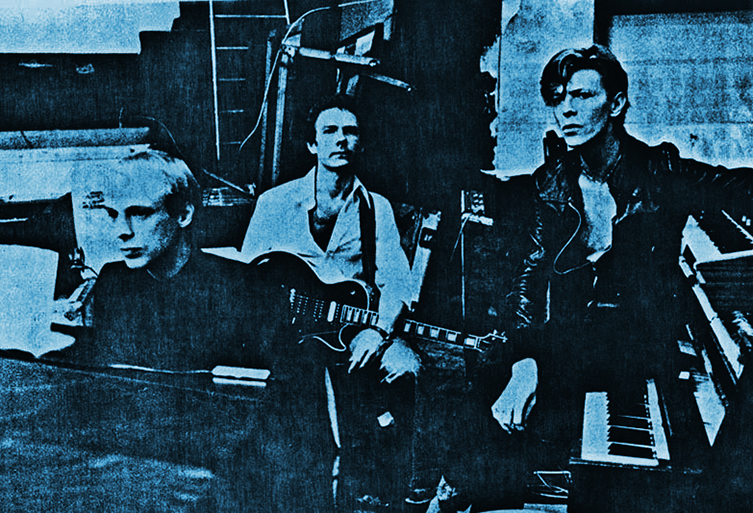 It’s a fairly well known piece of trivia that on David’s smash hit album (his biggest selling ever, in fact) Let’s Dance, the lead guitar work was by none other than Stevie Ray Vaughan. Legend has it that Bowie was taken along to one of SRV’s shows on a night off from his own touring schedule and was so impressed by hwat he saw and heard, he made a beeline for the backstage area to hustle Vaughan into playing before the gig had even ended! The results (futuristic synth pop with Texas Blues) are an unusual mix but when it works, it’s spectacular: check out the lead parts on China Girl for a great example. The rhythm parts (and indeed production) are handled by another great Strat player: Nile Rogers! David knew his players! 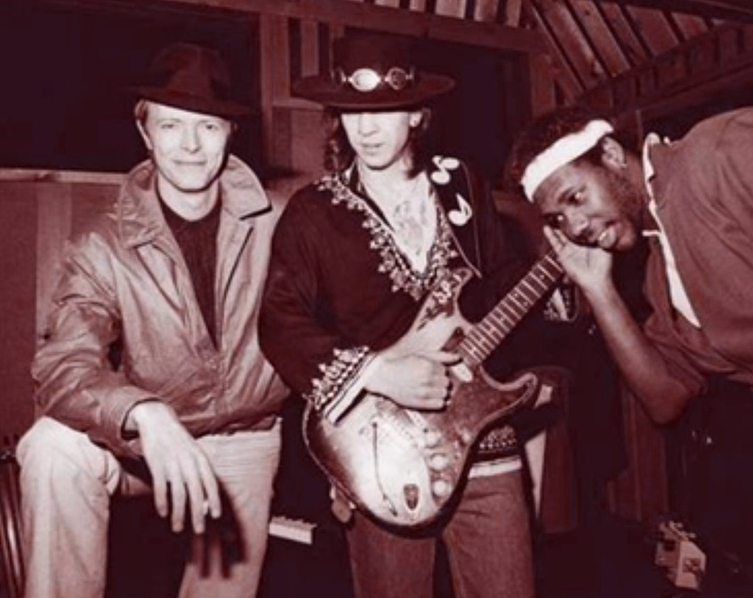 David’s last tour (in support of his album Reality) saw him bringing along old Station to Station-era favourite Earl Slick on axe duty alongside Gerry Leonard, these days otherwise known as Spooky Ghost. Slick’s confident Les Paul and Strat slinging meshed well with Leonard’s imaginative FX heavy PRS and SG playing. Leonard provided lots of real time textures and interesting loops with devices like Kaoss pads, Line 6 DL4’s and humble Boss compact models. Between the two of them, the sonic palette was as large and detailed as the setlist: Bowie fans didn’t know it at the time but the 2004 tour was the last time the great man ever performed extensively and he treated his fans to a career-spanning greatest hits retrospective from a portfolio of music that has never been equalled, far less bettered. 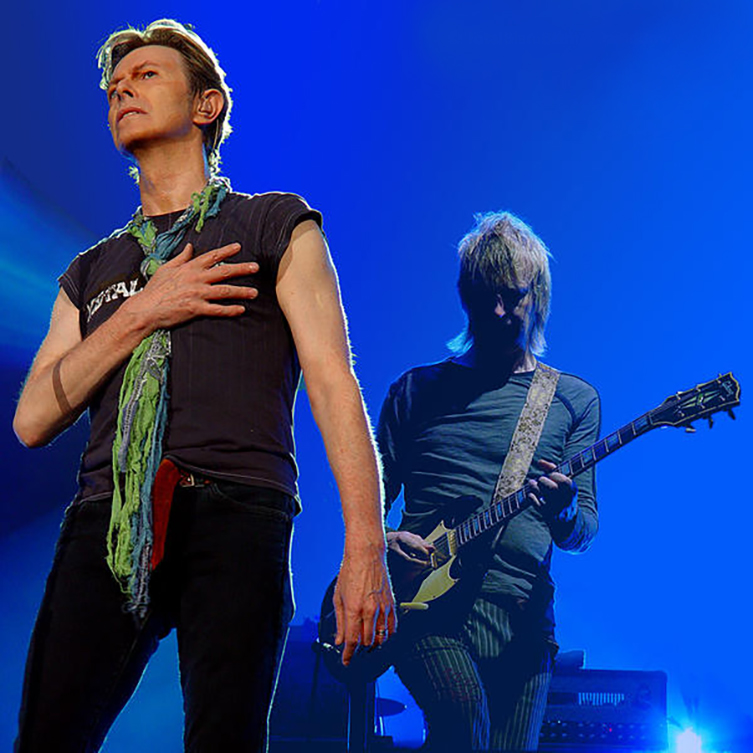 But what is that guitar he’s playing on the cover of the live album and DVD? That cool retro, space-age white guitar? It’s an old late fifties Supro Dual Tone, bought by Bowie off eBay simply for how it looked. After being given the once-over by his tech, this fast became David’s favourite guitar. Says Gerry Leonard: “It was the only one he wanted to play even though we had many other great instruments from famous makers available to him.” It has now been two years since his death and Supro have finally, with the authorisation of Bowie’s estate, produced a Limited Edition Dual Tone David Bowie guitar! It’s an incredible looking instrument, upgraded in the places where modernity has improved things (like the bridge for example) but otherwise recreating the guitar faithfully, including coloured ‘rainbow’ inlays next to the last five frets (Bowie’s guitar had these INSTEAD of the frets!). A mirrored ‘Bowie’ lightning logo adorns the headstock and is also flashed across the exterior of the hard case. This fitting tribute to the Alien is appropriate, timely and, like the man himself, an iconoclastic and mysterious object with lots of appeal!

We sadly don’t have space to give tribute to all of our favourite Bowie players: there are too many! We have to miss out the genius playing of Adrian Belew, the sonic invention of Reeves Gabrels, the incredibly expressive and liberated piano playing of Mike Garson and the fantastic bass playing of Gail Ann Dorsey but their contributions are as special and as important to David’s canon of music as any other player. He was certainly a genius but part of that genius was knowing exactly who to get to sprinkle some considerable magic on his songs. 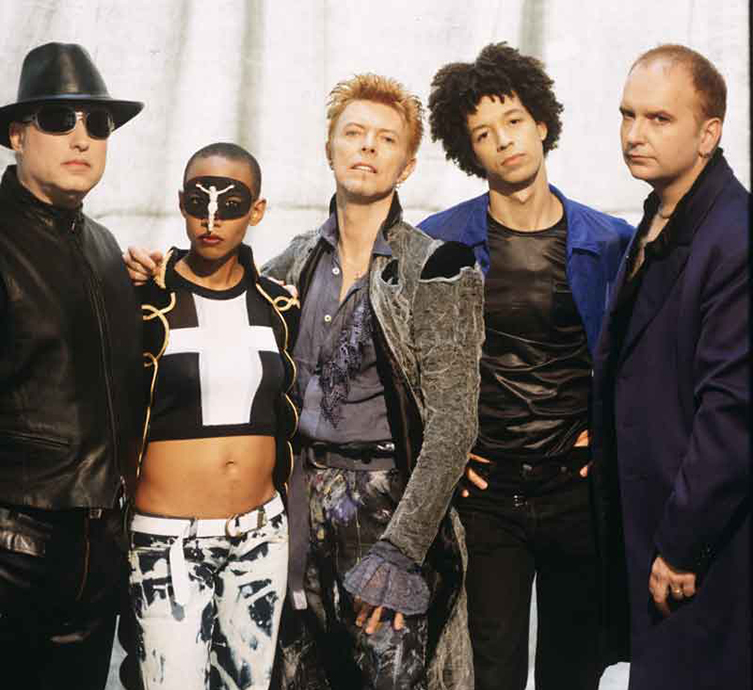 He has been gone for two years now but his enormous legacy of music - amongst the greatest music ever recorded - is a gift to us all forever. Thank you, Starman. 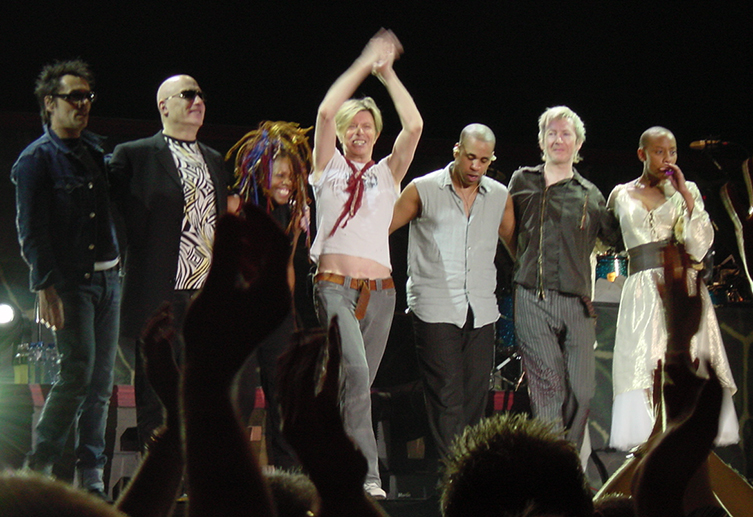