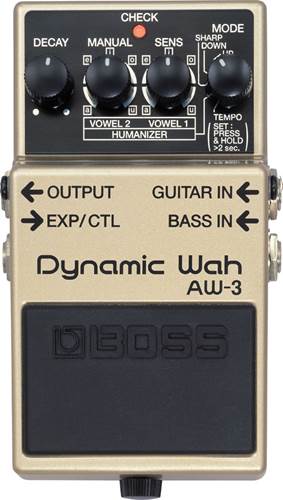 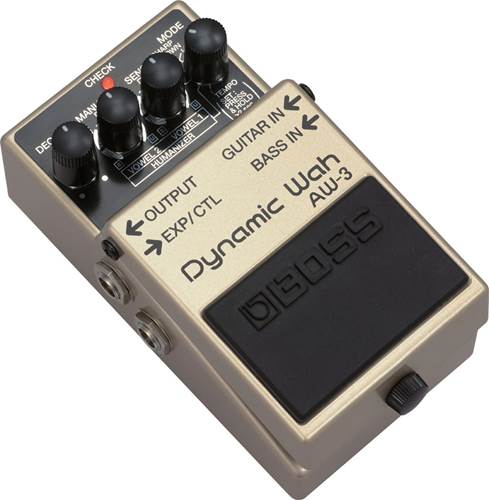 Boss’s colourful stomp boxes are the most recognisable pedal range in existence. For over 40 years, guitarists from bedrooms to stadiums have put their boot down on a Boss effect to transform their sound. Several models have passed into guitar legend and early examples can fetch extremely high prices. Happily, Boss have maintained their stellar reputation for world-class effects in bomb-proof casing with their current range and have fended off the imitators for decades to remain the pre-eminent single pedal effects manufacturer in the business. If there’s an effect for guitar (or bass, vocals, keys…be creative!) then you can bet Boss have a pedal of it in their range or even invented it outright! Every guitar player should get to experience the joy of selecting a pedal from Boss’s exhaustive roster, plugging it in and unleashing their wildest sonic dreams.

The AW-3 Auto Wah is actually a bit more than an Auto Wah! Suitable for a guitar or a bass (with a separate inputs for each), the AW-3 has a few varying options for wah sounds as well as a well-loved effect from Boss's multi-FX units: the Humanizer!

You can choose to have a wah sound that alters it's envelope (how long it goes waaaah for) depending on strength of pick attack dynamic or one that has a defined tempo for it's sweep; you can even connect an expression pedal (sold separately as an optional extra) and use this as a conventional treadle-style wah-wah pedal.

In the Humanizer mode, you can use the control knobs to select between two different 'vowel' noises. The pedal will then supply a frankly unnerving vocal robot noise to your playing! Drop this sound into one of your compositions and no one will miss it!

If you need a lot of wah and envelope filter sounds from 70s funk to over-the-top special effects, this may be the one pedal to do them all.

Takes a bit of tweaking to get the desired tone, but its good when you eventually get there.

We'll get in touch when the BOSS AW-3 Auto Wah is available.