Mesa’s Express range has always been a killer buy: you get an extremely well put together all-valve combo that has two footswitchable channels, valve reverb and a 5-band graphic EQ, all hand made and coming in a price that’s more attainable that Mesa’s top range Mark V amps whilst sharing a lot of that amp’s functionality.

The channels themselves have mini-switches to change their character: the clean channel can also be ‘Crunch’ whilst the drive channel can be set to either ‘Blues’ or ‘Burn’. Each channel has it’s own set of controls with gain, EQ and reverb knobs plus there is the footswitchable 5 Band graphic EQ (this is global) that can powerfully sculpt your tone.

A Power switch can set the power from 25watts down to 5w and even 1w for low power recording/lower headroom for the drive sounds. This amount of control is extremely impressive and the resulting tones are deep, complex, three dimensional and very impressive. This short head could be the solution for a lot of guitarists.

All-Tube and Hand-Built in Mesa's only shop in Petaluma, CA, the Express Plus offers genre-defining sounds, near-limitless versatility and unbeatable value that others can only imitate. How do they do it? They've been doing this for 44 years with all the same people…it’s their Experience – and there are no shortcuts to that. The new Express Plus amplifiers feature four exciting new features that bring them even closer to the flagship status of Mesa's award-winning MARK FIVE. 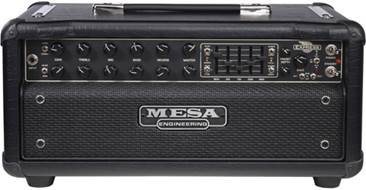 We'll get in touch when the Mesa Boogie Express 5:25+ Short Head is available.