One in ten of us, according to vague statistics, are left-handed. That makes up rather a large proportion of the populous. Accordingly, there are lots of left-handed guitar players out there too! Let’s show some love to those who must suffer backwards-looking guitars, available only in limited colours!

This blog’s aim is to highlight those lefty players who are true to their cause: they play left-handed with left-handed guitars (or at least right-handed guitars played upside down). Many fantastic guitarists like Eric Clapton and Billy Corgan are known to be left-handed but play 'normal', i.e. on right handed guitars. This means they are disqualified from today's blog! Sorry, but life can be tough. Let's spread some love for these bold southpaw guitar manglers who are unafraid to play a backwards guitar upside down!

Blues icon Albert king cut a mean, moody figure. Tall, solid, wearing shades and rocking a Flying V, Albert King had style and attitude. His playing and his signing voice were full of authority. King’s sound was powerful, with a very specific, over-pronounced vibrato style that makes his playing easy to recognise.

King generally played in open tunings, often custom variations of Open C. He reportedly never bothered with the high E (though he didn’t outright remove it) and favoured a set of strings that ran .009 to .050. This gave him the 'give' to make some ridiculous bends, and also helps explain that cool, wild vibrato.

Known to BB King as ‘my brother in the Blues’, King continued gigging right up until two days before his death in 1992. Albert king was the coolest.

Macca is of course best known as a bassist, but his presence as a lefty guitarist is pretty massive too. After all, how many other people own a left-handed ’59 Les Paul? Come to think of it, he most likely has them all... The legendary Wings songsmith, who was also in a band called 'The Beatles', is one of the most visible performing songwriters there has ever been. Still writing, collaborating, recording and performing at 79 years young, McCartney has been a major influence, one way or another, on effectively all popular musicians who have followed since.

Probably the most famous left-handed guitarist there ever was, Jimi Hendrix rewrote the book on lead guitar playing. Summoning up an expressive and unhinged amalgamation of Delta Blues and Outer Space, Hendrix’s excursions on the fretboard are still considered the summit of charismatic electric guitar playing. Other people may play faster, or have more tricks, but nobody has that shard of lightning flowing through every note. Jimi also did it first!

Hendrix, as we all know, favoured Fender Stratocasters. He simply turned them upside down and restrung them, paying no attention to the lack of upper fret access. Some have noted that the upside-down nature of his guitars played a part in his sound: not only is there different string tension (less travel on the high E to the end of the headstock, more travel on the low E) to change up the playing feel, there is a different bridge pickup response since it is slanted in the opposite way. Small details perhaps, but with guitar playing, small details are everything! And with a tone as revered and as dissected as Jimi’s, these things are even more significant than usual!

In a hundred years’ time, people may or may not still care about John Mayer, but they will certainly still be marvelling over the mercurial, timeless genius of Jimi Hendrix and his world-changing guitar playing.

Tony Iommi, Black Sabbath’s Riffmaster General, is a prominent lefty and one of the most significant creators in heavy music. More dramatic even than Sabbath's riffs is the grim finger injury he had to overcome in order to bring his influential brand of doom and horror to the masses. During Sabbath's early years, Iommi worked in a sheet metal factory. On his last day there, he accidentally sliced off the ends of his middle and ring fingers in one of the machines, causing a disgusting bloody mess and two permanently decapitated digits. Digging deep into his own reserves of courage and resolve, Iommi summoned the guts to continue playing, and even invented a set of home-made prosthetics to make up the tips of his fingers.

If that isn't Metal, we don't know what is.

As a result, Iommi uses light (gauge 8!) strings and often tunes his guitar several tones lower than standard. This, of course, is to make playing easier on his damaged fretting hand, but the happy upshot of this is that he inadvertently invented several subgenres of Metal from the resulting sound! Anyone who plays distorted, downtuned riffs owes Tony a pint.

His favourite guitar, almost from the very start, has been a Gibson SG. Both Gibson and Epiphone have honoured him with Signature models, available in left-handed form of course! Just as well! His guitars are easy to spot because they are always black and they always have menacing, gothic crucifixes as inlays. Realistically, what else was he supposed to play?

You could ask yourself: ‘How much more heavy can Iommi get?’ And the answer is: ‘None’.

Perhaps the most influential guitarist of his generation, Nirvana frontman Kurt Cobain played guitar the ‘wrong way round’ too. Much has been written in support of his ‘deconstructed’ style of guitar playing. As a guitarist, he was certainly devisive: some people saw him as a breath of fresh air whilst others thought him to be a cack-handed, atonal pretender. There seems not to be too many people in the middle ground who simply ‘don’t mind’ his style.

For us, that is the mark of an artist. Cobain didn’t go for showy solos (ever, really) but his influence on other musicians, even two and a half decades after his death, is huge. When people begin to love guitar music at an early age, players like Hendrix or Slash can be intimidating. Kurt’s playing, on the other hand, is something you can work towards!

Kurt’s very deliberate playing style was accessible and sounded incredible. He favoured Fenders, though he tended to play whatever he could find cheaply that was left-handed:

“I don’t favour them—I can afford them. [laughs] I’m left-handed, and it’s not very easy to find reasonably priced, high-quality left-handed guitars. But out of all the guitars in the whole world, the Fender Mustang is my favourite. I’ve only owned two of them.”

His pragmatic attitude was refreshing:

“Lately, I’ve been using a Strat live, because I don’t want to ruin my Mustang yet. I like to use Japanese Strats because they’re a bit cheaper, and the frets are smaller than the American versions.”

We understand when shredders say they don’t like Cobain’s sublime playing. We just don’t agree with them!

Surely Dick Dale was the world’s most ferocious surf guitarist? Pulp Fiction introduced us to Miserlou - Dale’s take on an old Eastern European folk melody - played with blistering speed with a tone to die for! Dale played his brilliantly sparkly strat upside down, and didn’t even bother to restring it. Known as ‘The Beast’, his gold Strat was strung up with this frankly terrifying string gauge, from high to low: .016, .018, .020, .039, .049 & finally a .060! Goodness gracious!

Dale was also responsible for Fender having to build him a louder amp than any they made in history. His habit or entirely wrecking his tube amps brought him to Fender’s design guys. Blowing through almost 50 prototypes, Dale showed the amp guys who was boss before the finished design of the Fender Showman amp delivered what he needed: a sound so loud that crowds could feel it hitting them before they even made it into the venue.

This is the correct kind of attitude to take.

His ground-breaking work with sound, reverb, volume and sheer attitude have made him an influential and underrated musician. More like him please!

At the Drive-In and The Mars Volta’s creative mastermind Omar Rodriguez-Lopez is an inspiring force of energy and ideas. His furious, FX-laden guitar playing combines melody, atonality, texture and riffs like a crazy radio station’s worth of styles, all at once!

Initially a bassist, Omar often still says that he isn’t a guitarist, or even a musician, which is frankly ridiculous:

“I don’t consider myself a musician. I know musicians and I’ve played with ones who are very knowledgeable in their craft and can move around gracefully and know everything about their instruments. And in comparison, I know very little. But not being a musician gives me a lot of freedom when it comes to how I can express myself.”

However he sees it, he is an astonishing player. During the early days of At the Drive-In, Rodriguez-Lopez insisted in playing left-handed Squier Supersonic guitars. A signature model with Ibanez followed in his Mars Volta days, and nowadays he is a Music Man artist, with his own signature Mariposa model.

Whatever he plays, though, you can bet that it’ll be full of energy, colour and invention.

What we’ve noticed mostly is that this is a diverse list! What links them is the impact they have all made within their scene, or in Paul McCartney’s case, ALL scenes. There is a mix of lead players, riff ‘n’ rhythms guys and some unorthodox mavericks in there, all making their way with unique voices on their left-handed instruments.

Some people are always left out, so let’s get some honourable mentions in: Tim Armstrong, Elliot Easton, Eric Gales and Otis Rush.

Tune in next time for more, and in the meantime, thanks for reading. 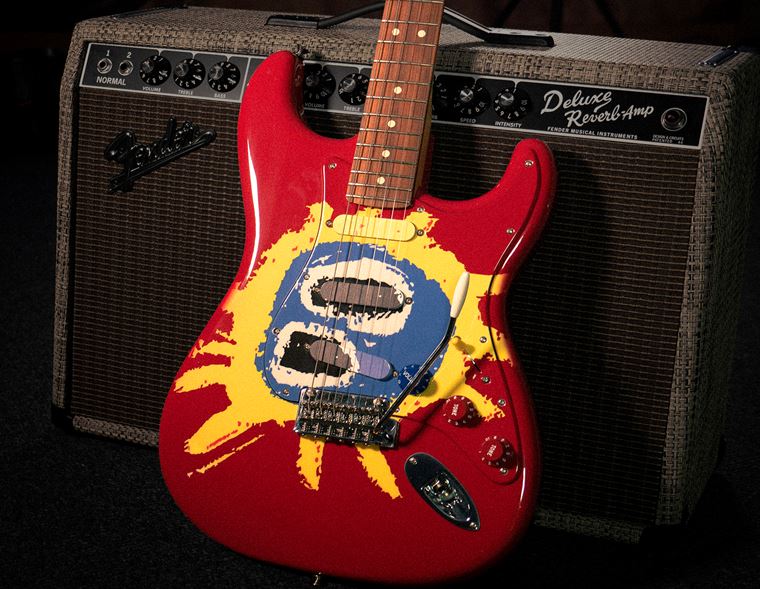