They came, they went away for a decade or two, but they’re back and it seems they are here to stay!

From Tron to Stranger Things, E.T to Steel Panther, the 80s have become something of a cultural touchstone to a more innocent, fun time: neon, arcades, kids riding bikes, Hair Metal, Tom Hanks when he was a good laugh... the 80s in general, especially to those who didn’t live through them, just seemed more fun!

80s culture has permeated at every point, through fashion, TV, film and music. What was once laughed at for being hilariously ‘of its time’ is now regarded as being preciously prescient visions of the future, from a time when people dreamed a little more colourfully. 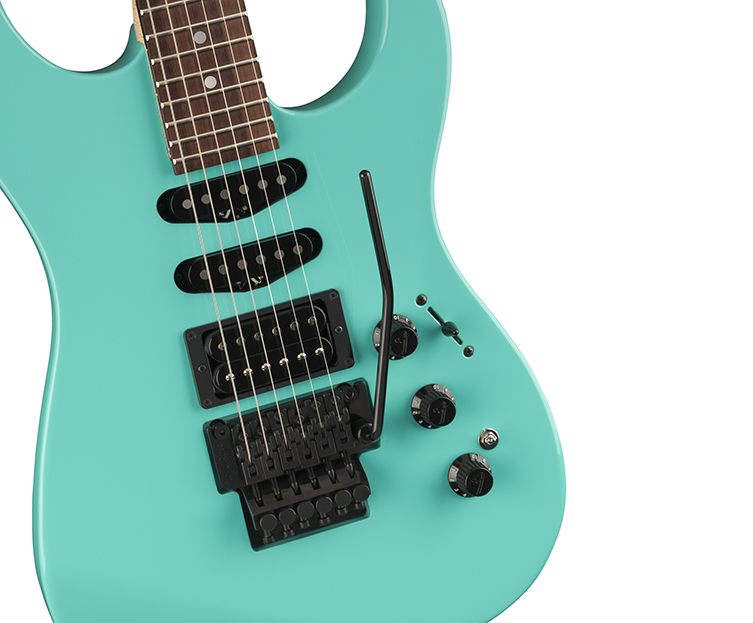 80s Hard Rock is a good example: loud, flashy, determined to have a good time (and happy to bring you along), unconcerned with serious issues, the bands from the time of spandex and hairspray gave you a fun escape from real life. Hair was tall, clothes were bold, songs had huge choruses, huger keyboard parts and shamelessly ‘verbose’ guitar parts, the likes of which we are only now starting to see again in any comparative sense. Larger-than-life was a term well suited.

Yes, the 80s are well worth celebrating.

Fender obviously think this way, judging by some of their new reissues!

Today we are going to check out the HM Strat and the Player Lead series, which includes the Lead II and Lead III models. Although it’s fair to remark that these are relatively separate instruments, we think they share a fun 80s sensibility: they are both retro reissues after all! Let’s check out the Lead models first...

The Lead Series debuted in 1979, as a response to the raft of low-cost Far Eastern imported guitars that were flooding the market. Fender sought to re-capture some market share with a more affordable guitar that was both brand new and instantly recognisable as a ‘Fender’.

The Lead Series (the II and III are the same guitars with different pickups and switching) brought with it a unique new double cutaway body shape, made from Alder. Neither symmetrical nor offset, the Lead’s distinctive body sets it quite apart from other Fenders, despite being familiar in style.

This 2020 incarnation preserves the shape and relative specs of the original. The Fender Lead II has a pair of single coil pickups, with toggle switching onboard for pickup selection and, interestingly, phase reversal! Now, that’s a useful feature! The pickups themselves are the same Alnico 5 units found on the Player Stratocaster. We’ve had ample experience with these pickups and can report that they are head and shoulders above Fender’s previous Mexican stock pickups: these are subtle, snappy and have an inherent tone that is mature and convincing. We think most players will be very satisfied with the sounds of the Lead II right out of the box. 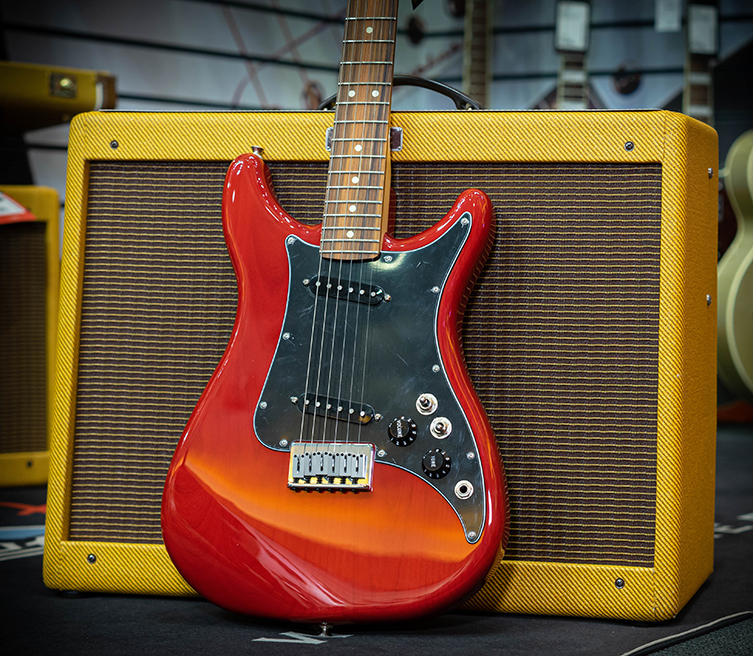 The Lead II is a hardtail, like the original, and strings through the body. As we know, this is a good idea for both sustain and tuning stability, not to mention adherence to the original models! Talking of originals, the two original finishes, Black and Crimson Red Transparent, are available here for prime vintage authenticity, along with the brilliant new why-didn’t-they-make-it-at-the-time Neon Green! 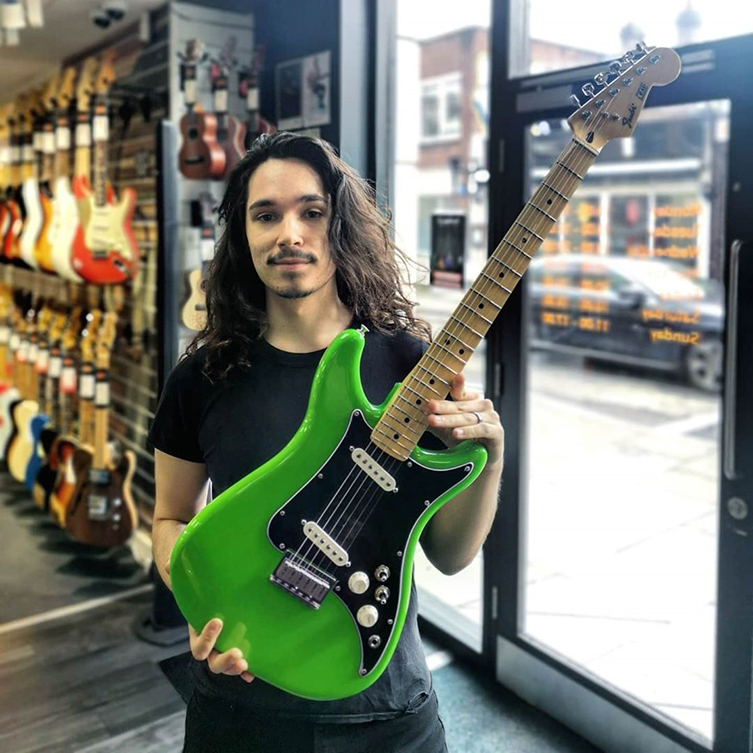 The Lead III, originally introduced a few years later in 1982, takes the formula we’ve looked at and adds some muscle to the mix. Out are the single coils, in favour of a pair of Player humbuckers. These are Alnico 2 units and have a relatively hot sound that should feel neither too under-nor over-powered for most players. Again, the Player humbucker is a step up from what we have sometimes seen in ‘stock’ pickups: they give up details and harmonics well, with a sound that’s sustained and satisfying. 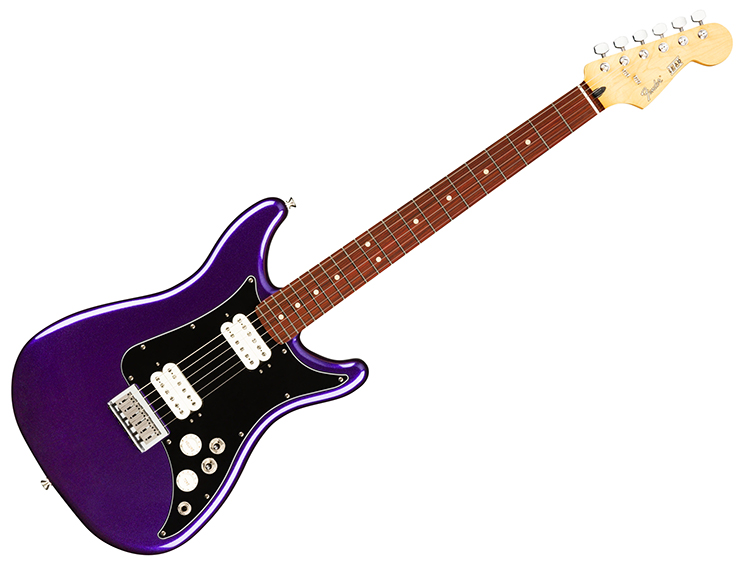 The Lead III changes out the phase switching for a more expected coil tap option. We think that’s a sensible decision, since it really opens up the range of the instrument. There are undoubtedly situations that are better served by single coils, so the scope here is obvious. 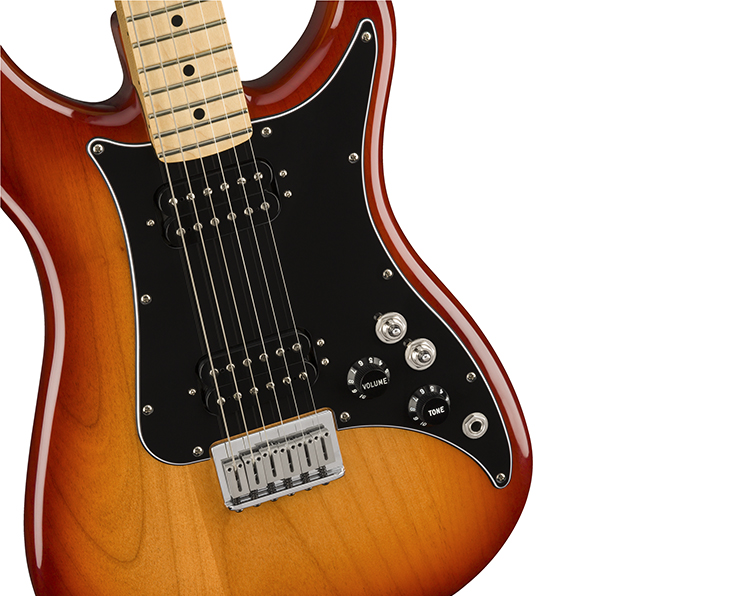 The neck is the same on both the Lead II and III. It’s classic Modern Fender: a C profile neck with 22 medium jumbo frets on a 9.5” radius fingerboard. The board itself can be Maple or Pau Ferro, depending on the finish. For example, the Black Lead II has a Maple board and the Purple Lead III boasts Pau Ferro.

The Fender Player Lead III is available in Sienna Sunburst, Olympic White and Purple Metallic. Something for all tastes! 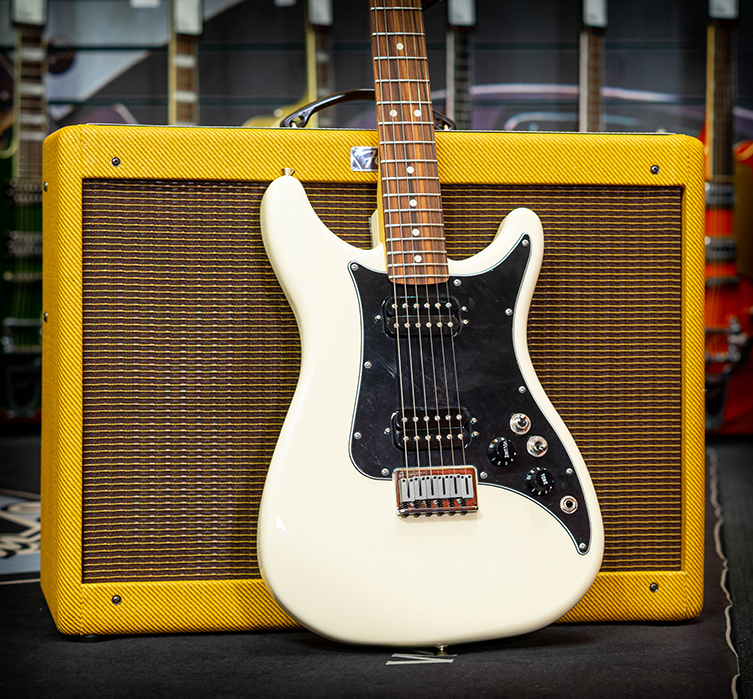 Indeed, it doesn’t get more ‘80s’ than this beast! And yes, the HM does stand for ‘Heavy Metal’. You bet it does!

So, this is a limited-edition model, and it’s made in Japan, in the exact same factory that made the originals, fact fans! The HM Strat was first released in 1988, and was Fender’s take on the Superstrat, a style that overwhelmingly dominated guitar-centric tastes in the 80s. A brief glance will tell you much about this guitar, since it is hardly subtle, but there is more happening spec-wise than you may first suspect. Let’s inch our way in... 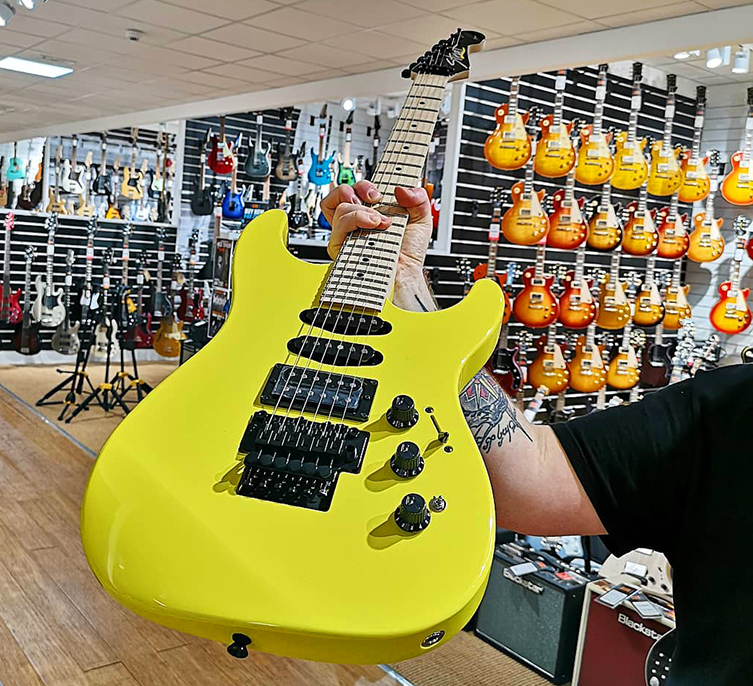 The Fender HM Strat has an offset body. It’s not too obvious but take a look and you’ll see it! The contours are a little different around the basswood body, as are the slightly sharpened horns. Of most pertinence to the user in the sculpted heel joint, a feature that has become standard on a great many ‘performance’ guitars to allow for more comfortable sweep-picks and octave arpeggios.

The neck has its own agenda entirely: it’s a narrow C profile, meaning that it’s both skinner width-wise and at the back. The fingerboard (again, wood types changes with each finish option, though in this case, Fender Japan are using Rosewood instead of Pau Ferro) has a radius of 17”, which is super-flat, and has a full two octaves’ worth of jumbo frets in order to carry out maximum shred-damage.

The really interesting point to mention is the scale length. The Fender HM Strat has a scale length of 25.1 inches! That’s VERY unusual for a Fender guitar. Well, let’s face it, it’s very unusual for any guitar at all! The closest would be PRS’s standard value of 25” dead. This HM Strat, therefore, is a little longer in scale than a typical Gibson and almost half an inch slinkier than Fender’s standard. To us, that translates as easier and more accurate string bending. Bonus! It’s a pretty superb collection of specs here, and we’d be remiss not to point out the Gotoh tuners up at that excellently silk-screened black headstock! You’re scoring major points here, Fender!

Back to the business end, you’ll find an H-S-S pickup layout. These are open coil ‘HM’ pickups, and there isn’t much detail about these in terms of specification, but we can happily tell you that they ROAR! They are loud, punchy and full of life, but then, you’d be expecting that from this guitar, right? You can tap the humbucker for a janglier tone, not that such a thought enters your head when zooming about on this thing. 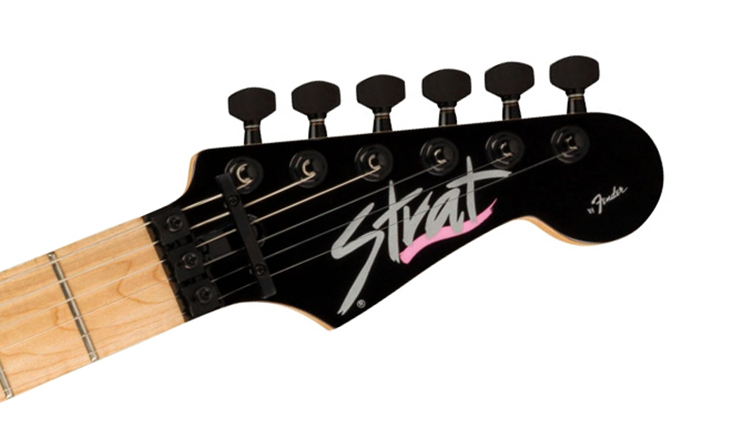 Harmonics positively ping out of these pickups, which is what you need when you perform a ‘whammy bar frenzy’ with the proper Floyd Rose Special locking tremolo that Fender have seen fit to include. Frankly, it would be demented not to, on such an axe. Why would you not want to instantly and endlessly perform your entire repertoire of Lynch/Vai/Satch/Gilbert/Friedman/Dimebag whammy tricks to all within earshot? It would be a wasted opportunity.

This is a very faithful reissue of the original 1988 HM Strat, right down to the suitably Marmite finishes that include Flash Pink and Frozen Yellow. Our favourite is the quite gorgeous Ice Blue. It is available in ‘Bright’ White too, but you can get a white guitar any day of the week! Flash Pink, people! Ice Blue! 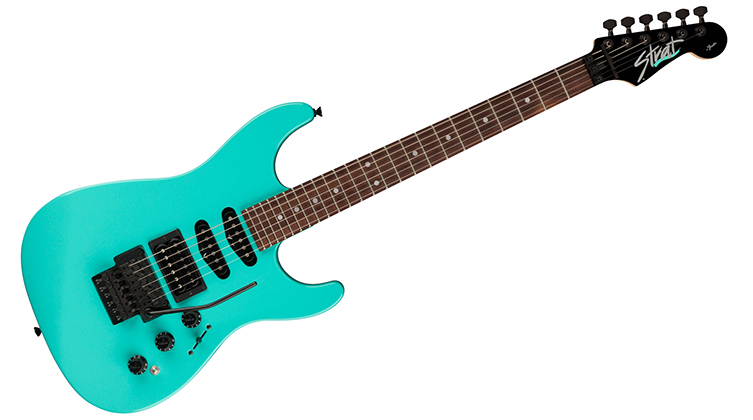 The main purpose of owning any guitar is to fun have with it. That is the primary motivation to get involved in the first place, and the main reason to keep coming back once you do. These guitars, each one of them, is well made, good quality and very responsive. This is all great, but what they really are is amazing fun: they encourage you to play for the fun of it, making as many wild noises and striking as many self-obsessed poses as are possible in whichever context you find yourself. Life can get a bit serious awfully quickly these days. Take a leaf from our 80s brethren and grab some time to play for the pure joy of it. These guitars can most definitely help with that goal!

Check out the HM Strat on our site, and indeed our Player Lead guitars.