You should play an Epiphone semi. It’s a pretty easy conversation to have with yourself. These guitars are extremely affordable, are played by gigging pros every day of the year, and have a rich heritage to rival The Big Two. 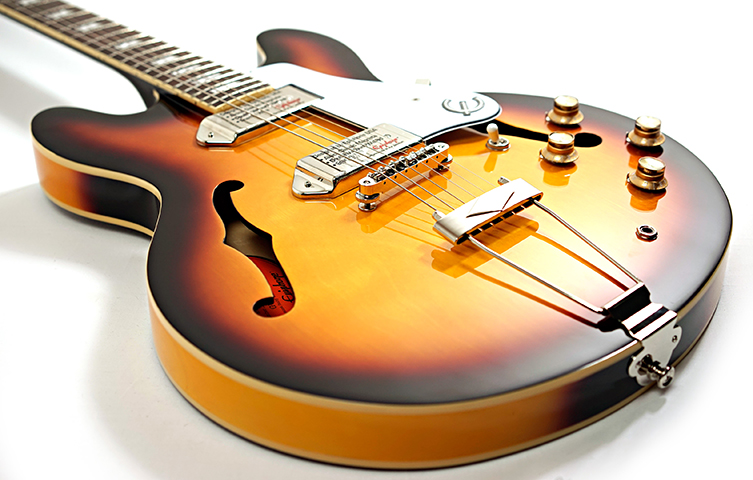 In fact, one of the Big Two owns Epiphone! As we know, Gibson bought Epiphone many decades ago (on the advice of a certain Mr Les Paul, no less...) and since then have used the brand to produce both licensed copies of Gibson’s designs (the Les Paul, Firebird, 335 etc) and their own guitar designs like the Casino and the Sheraton.

This plan has worked well. Epiphone are one of the world’s best-selling guitar brands. As we’ve noted, they are priced within range of all players, but good enough quality to take on the road. Today, we’d like to focus on an area they’ve dominated: semi-acoustics. Yes, the world of the semi-hollow (and fully hollow, sometimes) f-holed guitar is synonymous of the brand, and we’d like to check out some of our favourite varieties.

The Beatles and the Blues

It’s definitely fair to say that the Beatles put Epiphone on the map. Yes, Epiphone were once a New York-based Jazz guitar brand who rivalled Gibson for pole position in the roaring 20s, but those times were in the past. The Beatles brought Rock n Roll to every home on the planet, and the world saw Paul McCartney and John Lennon’s Epiphone Casinos. This image remains all these years later, and Casinos retain that magical association with the Fab Four, just as it later did with Paul Weller and others in the 90s. Current Blues Hero Gary Clarke Junior even had a signature Casino model, in a custom shade of Blue, bringing the instrument up to date for today’s players. 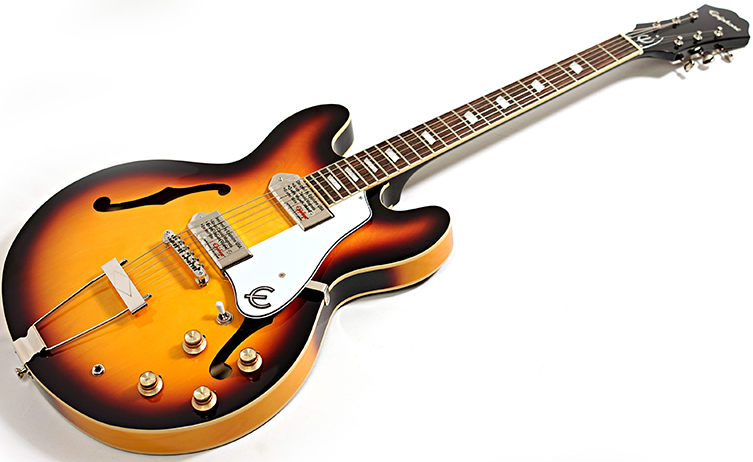 Blues Legend John Lee Hooker was an avid fan of the opulent Sheraton model, calling it ‘an outdid 335’, in relation to Gibson’s foremost semi-acoustic. The Sheraton’s a beauty indeed, with its layers of binding, ornate inlay work and historical headstock design taken from the ‘New York-era’ guitars of Epi Stathopoulos’s day. The Epiphone Sheraton remains an excellent choice for fans of this style of guitar: you get so much for your money! 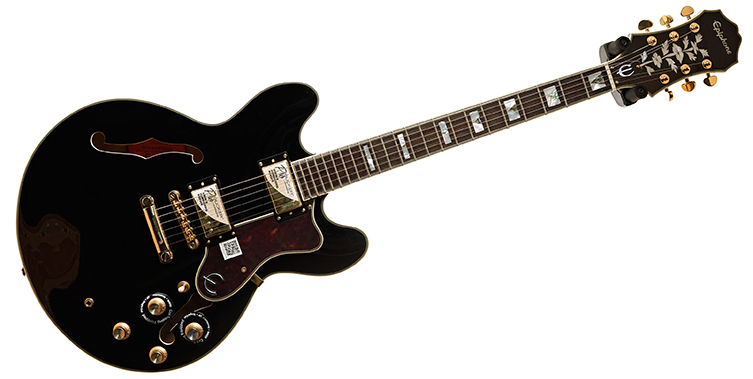 The Dot is easily the most popular Epiphone Semi. First off, the name. The Dot is obviously Epiphone’s take on the legendary Gibson ES-335. Back in the 50s and 60s, 335 guitars were released that had both ‘dot’ and ‘block’ inlays, and so the nickname was coined to differentiate. Epiphone have simply lifted this little piece of history and applied it to their model. 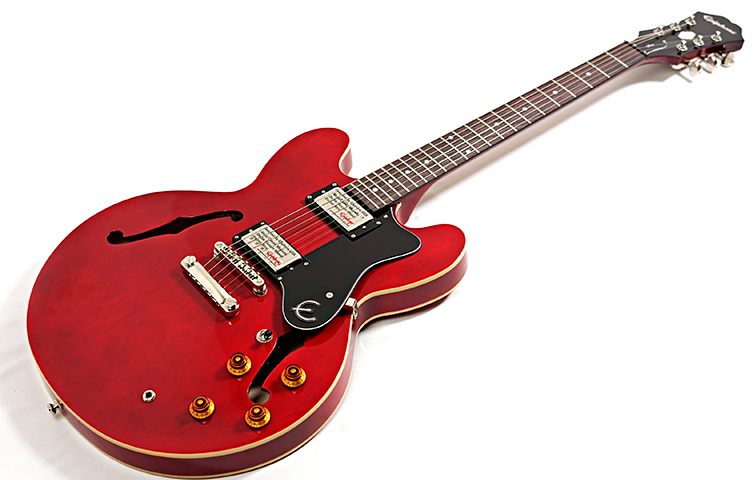 The Dot is made, like nearly all Epiphone and Gibson semis, with a semi hollow plywood body and a centre block of Maple. Two medium-output pickups supply the voice. The resulting sound is fuller and thicker than the Casino’s, due to its fully hollow body and single coil P90 pickups, but lighter and airier than the fat chunk of a Les Paul.

Interestingly, the Dot has largely avoided genre pigeon-holing, due in part to its versatility. Jazzers, Blues cats, Rockers, Goths and of course the Mods/Britpoppers all love the adaptable sound and timeless look of the Dot. Josh Home from Queens of the Stone Age has remarked about it being ‘his favourite hammer’, whilst posing with it on the front of guitar magazines. He’s in a position of being able to play whatever he likes, so that’s some endorsement indeed! 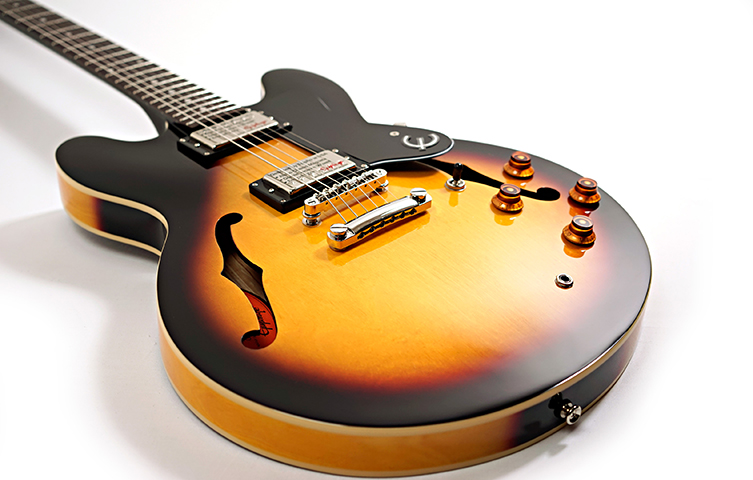 In the last decade or so, it has become apparent to both Epiphone and Gibson that slightly down-sized versions of some of these classic designs might be a good idea. Some players have trouble with the large bodies, particularly whilst sitting down. Personally, we love the size, but there are clearly those who like this vibe in a more manageable size! 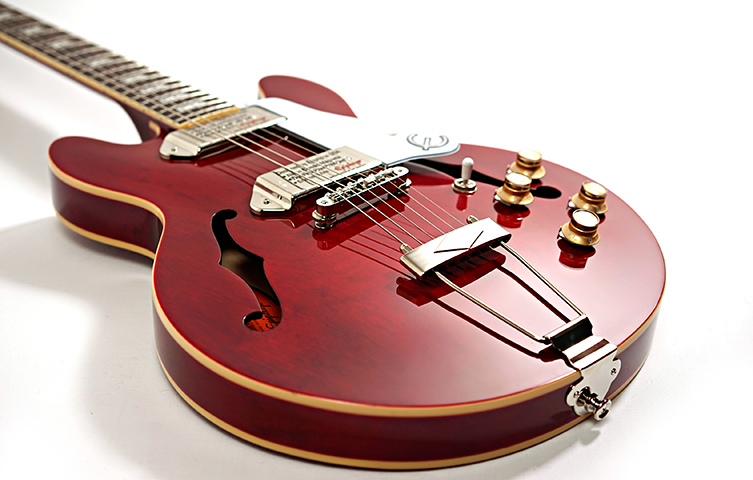 Step forward the ES-339 and the Casino Coupe. The ES-339 shares its name with Gibson’s model, and is a compact 335. The Casino Coupe, as you’ll no doubt guess, is a significantly smaller Casino. We’re talking roughly Les Paul sized (give or take) bodies but full-sized necks and hardware. These aren’t ¾ guitars or anything like that at all: they are simply Dots and Casinos with shrunken bodies! 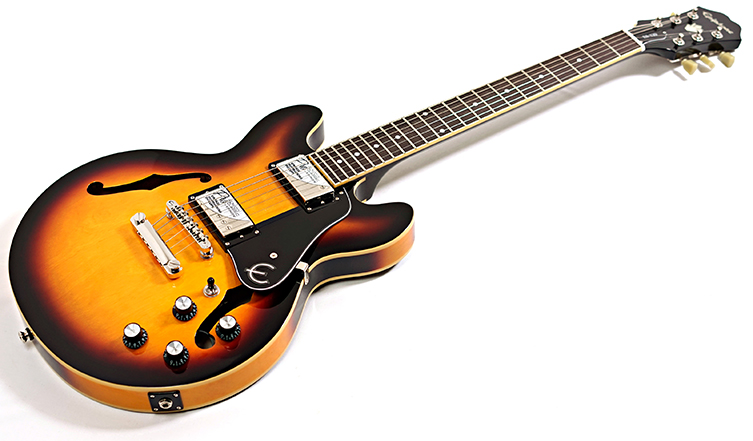 Epiphone still create semi-acoustic models that do not tally up to an equivalent Gibson guitar. The ‘house style’ is very much there, as you’d want it to be, but guitars like the Wildkat and the Uptown Kat are very much their own creations.

Semi-acoustic, compact is size and fitted out with a Bigsby tremolo, the Wildkat is a charismatic P90-fitted tone machine. A striking figured Maple top enhances the Rockabilly cool of this original axe.

A newer offshoot of this style is the Uptown Kat, which rides in with some epic finishes (the back is painted ENITRELY gold!), mini Pro-bucker pickups and beautiful block inlays on the Ebony fingerboard! Luxury indeed! This instrument will hold its own in any Jazz, Blues, Rock and Pop setting. With cool factor and swagger available in plentiful measures, this is an instrument just begging for the stage.

We expect you are all quite familiar with Epiphone’s semi-acoustic guitars already, but it never hurts to remind yourself why they’ve become such a popular and important part of our guitar-playing lives. They really do bring a heap of quality to the everyday player, and they provide legitimately famous guitar styles for players who want to connect with those types of legendary images.

Epiphone are so much more than ‘cheap Gibsons’ and we think there’s plenty of proof out there to support that these days. They look great, feel solid, play well and sound excellent. Epiphone guitars were always good, but today they are better than ever. If you don’t yet own a semi-acoustic guitar, Epiphone definitely have something great for you.