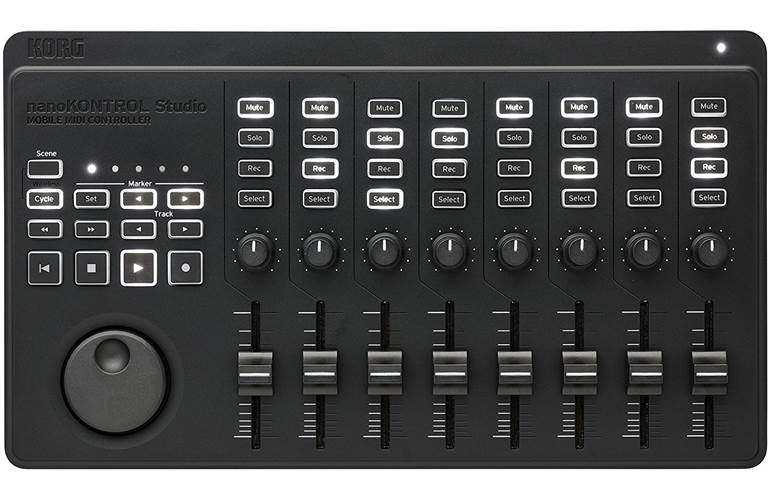 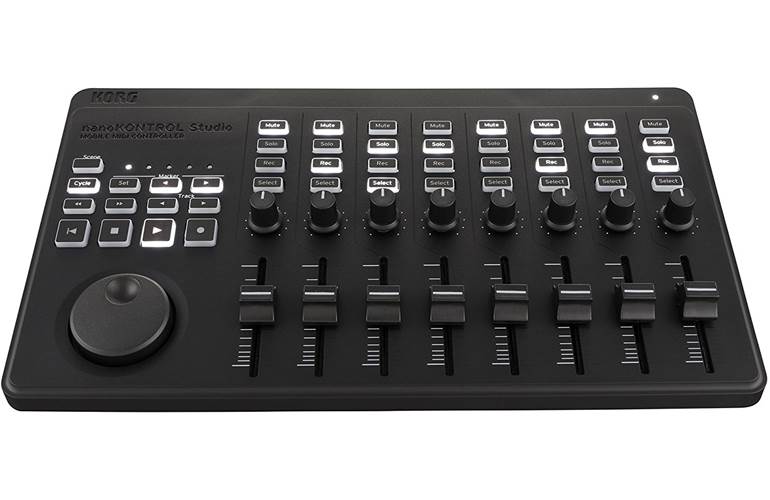 The Nanokontrol Studio from Korg is a fully-equipped control surface in a compact, stylish package. There are tons of faders, knobs and switches on board, as well as useful controls for playback and recording. With both USB and Bluetooth connectivity, the Nanokontrol studio is ready for any situation!

The Nanokontrol Studio features eight channels of control. Each channel has its own fader, knob and switches. On the left you also have main DAW controls and a jog wheel. It’s great to have so much control in such a small device!

Thanks to the low-profile design of the Nanokontrol Studio, you can easily take it anywhere with you!

The Nanokontrol Studio is USB bus-powered, meaning you can plug it into your computer with the included cable and play with minimal fuss. Alternatively, you can use AAA batteries to power the unit and connect over Bluetooth. This is ideal for on-the-go use with mobile devices and laptops with Bluetooth.

A compact physical MIDI controller that’s ideal for mobile or desktop uses.
Smaller than a letter-sized sheet of paper, the nanoKONTROL Studio is designed for thinness. It’s the perfect size to easily carry in a bag and use with your computer. In spite of its compact size, its controllers provide generous power and a solid feel, making it a convenient and versatile MIDI controller.

USB and wireless for more music production freedom.
The nanoKONTROL Studio can connect not only via USB but also wirelessly. It can easily connect to iPad/iPhone music apps such as KORG Gadget and Apple GarageBand, or to your Mac/Windows music production software. Freed from annoying cables, you can set up your equipment easily and efficiently. Due to careful tuning, you can enjoy low latency and high stability.

Refined and stylish design
The simple, refined, and stylish design features illumination with beautiful white LEDs. The design has been modernized to use alongside new devices such as your laptop, tablet, or smartphone.

A full array of controllers that cover everything from DAW control to DJ performance.
You have the all controllers you need to operate your DAW: sliders that feature generous spacing and stroke, plus a convenient jog wheel. Whether you’re controlling your DAW and plug-ins, or putting on a performance, the nanoKONTROL Studio provides everything you need in any situation.
Preliminary Information – Specifications and features subject to change

A lavish bundle of powerful music software is included free of charge.
The nanoKONTROL Studio comes with the incredible “KORG Software Bundle” that lets you start enjoying popular music software right away. Whether you’re on mobile or laptop, you can start creating music as soon as you purchase this unit.

The sounds and functionality of “iPad / iPhone apps” can be expanded by connecting them to a nano Studio series unit.

We'll get in touch when the Korg Nanokontrol Studio is available.